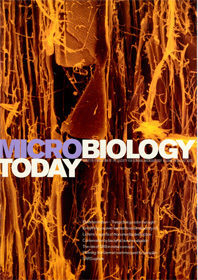 The lead articles of the August 2003 issue of Microbiology Today are on things that go rot in the night; everything you ever wanted to know about dry rot; lichens - agents of monumental destruction; conservation by bacterial bioremineralisation; the role of SRB in metal corrosion; Pilzkrieg: the German wartime quest for penicillin; and the SARS update.

Things that go rot in the night - a review of biodeterioration (p. 103)

Everything you wanted to know about the dry-rot fungus but were afraid to ask (p. 107)

Dry rot of timber, caused by the fungus Serpula lacrymans, is a serious problem not only in domestic and commercial buildings worldwide, but also in important historic edifices. John Palfreyman and Nia White describe the dry-rot fungus and the conditions necessary for its growth, how it causes timber to decay and what can be done to prevent and control its effects.

Lichens are a familiar sight on buildings and trees. These symbiotic associations of fungi and algae or cyanobacteria are generally perceived to be harmless to the environment, but as Mark Seaward describes, they can attach stonework, resulting in damage to monuments, churches and other structures.

Microbes are often responsible for the decay of stonework, but Brunello Perito and Giorgio Mastromei have found a way of using bacteria to conserve monuments through the technique of bioremineralisation.

Sulfate-reducing bacteria in biofilms on metallic materials and corrosion (p. 115)

Microbial growth can cause serious corrosion of metals. Iwona Beech explains the role of sulfate-reducing bacteria in this phenomenon.

Biodeterioration can mean business. Richard Smith describes the unit set up at the University of Hertfordshire to monitor and investigate biodegradation problems.

Despite all their intelligence and scientific efforst, the Germans did not succeed in producing bulk supplies of penicillin during World War II. Gilbert Shama explains why.

In mid-March 2003 the World Health Organisation (WHO) issued emergency guidance for travellers and airlines in the light of 'a worldwide health threat' from a new infectious disease called Severe Acute Respiratory Syndrome (SARS). Thought to be caused by a virus, SARS defied treatment and was proving fatal in many cases. Faye Jones has chronicled the whole story week by week - this is a summary of whta has been dubbed 'the first global epidemic of the 21st century'.

The Society speaks to David Studholme about jobs in bioinformatics.

The rapid emergence and spread of an apparently untreatable new infectious disease - SARS - has caused consternation around the world. The cause was quickly identified as a coronavirus. Dave Cavanagh counsels that in developing strategies to deal with the SARS virus the medical profession has much to learn from experience of coronoviruses gained in a veterinary context.