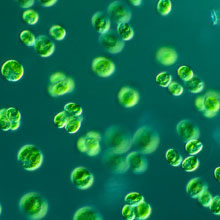 It is hard to imagine a functioning modern society that does not put plants and microbes to use. For thousands of years we have cultivated, adapted and, more recently, modified these organisms to suit our needs for food production, agriculture and medicine. In this context, it is surprising that microalgae, which are both photosynthetic and unicellular, are not more commonly used in industry, such as for biofuels.

The possibility of using algae as a feedstock for biofuels has been widely hailed since the 1970s. In this article, we discuss the status quo of algal biofuel research, and why algal biofuels are, as yet, not widely commercially available, as well as future prospects.

A number of microalgal strains have been shown to accumulate lipids that can be converted into biodiesel in a manner similar to oils extracted from rapeseed or oil palm. In fact, extrapolating from data collected under laboratory conditions, microalgae have been estimated to produce between 10 and 100 times more oil per hectare than these land crops (Fig. 1). The area of land required to grow a biofuel crop is directly correlated to productivity. With microalgae we can reduce the ‘land footprint’ of biofuels, making more room for food production, recreation and conservation. Moreover, algal growth facilities can be built on marginal land, next to power stations or existing water treatment works (Fig. 2), avoiding the food versus fuel debate that continues over conventional crop-derived biofuels.

Fig. 1. Oil production per hectare of various biodiesel crops. The figure shows the relative amount of biodiesel that may be produced from a range of feedstocks. Productivities are given below the photographs in tonnes of oil produced per hectare of land per year (te/ha/yr). The oil yields for Nannochloropsis are extrapolated from laboratory experiments. 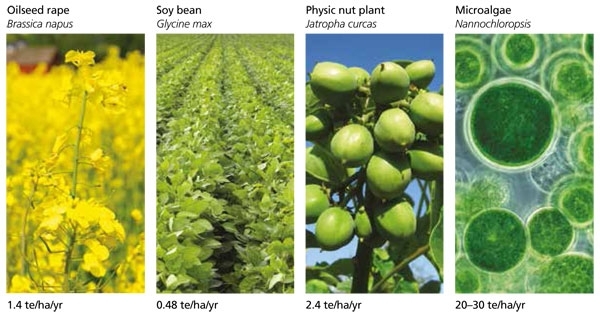 Transportation fuel is a low-cost commodity produced and consumed in large volumes. Current commercial growing of algae on the other hand is restricted to low-volume facilities producing high value products, such as nutraceuticals [e.g. β-carotene (pro-vitamin A) from Dunaliella salina] or pigments (e.g. astaxanthin produced by Haematococcus used in aquaculture to obtain pink-coloured fish). The challenge of growing algae for the biofuels market is to expand the scale at which they are grown, whilst reducing the energy and running costs to a minimum. The energy required over the ‘lifecycle’ of the biofuel is particularly relevant, as it is key to its overall sustainability. To meet the challenge, a number of biological and engineering breakthroughs are required, which will involve interdisciplinary research effort on many fronts.

There is still no consensus on which algal strains should be cultivated for the production of biofuels. Overall, there are an estimated 300,000 species of microalgae, spread across a range of phyla and separated by millions of years of evolution. Their long evolutionary history and diversity has allowed algae to colonise a range of environments. This holds potential for the bio-prospecting of strains that are suitable for cultivation in a range of climatic environments. Although most field trials of algal growth facilities to date have been in locations where sunlight and space are plentiful, algae can grow in all environments. In fact, many species are more vulnerable to temperature fluctuations than light availability, which makes maritime climates such as in the UK more suitable for their industrialisation. 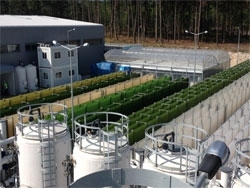 Candidate strains for biofuel production are usually compared based on their capacity to produce neutral lipids, in particular triacylglycerides (TAGs), as these can be transesterified into the fatty acid methyl esters (FAMEs), which constitute biodiesel. Many microalgae synthesise TAGs in response to stresses such as nitrogen limitation. Hu & others (2008) reported the average total lipid content for more than 80 strains of oil-rich algae to be approximately 25.5% under nutrient sufficient conditions, rising to an average of 45.7% when nitrogen was limiting. The effect is more pronounced for some species, such as Chlorella vulgaris where TAGs constituting up to 70% of the dry biomass have been recorded under nitrogen deficiency. However, the trade-off is that TAG biosynthesis occurs in conditions that are not conducive to cell growth and reproduction, which can actually result in lower net lipid productivity of the algal culture over time.

A possible way to overcome this might be to up-regulate the TAG biosynthesis pathway in actively growing cells through genetic modification. This is a young but rapidly expanding field of research, which relies on the development of tools for transforming algae, as well as an understanding of lipid metabolism at the molecular level. Currently, the genome sequences of 40 or so algal species have been completed, including that for the freshwater green alga Chlamydomonas reinhardtii. Although not a naturally lipid-rich alga, many molecular tools are available for this species so it is widely used for studies of lipid metabolism. In recent years, fast-growing oleaginous algae that have received increasing attention are the diatom Phaeodactylum tricornutum, and the eustigmatophyte Nannochloropsis spp., both of which are marine, meaning they can be grown in salt or brackish water. An alternative to up-regulating lipid production is to ‘delete’ other pathways in the organism in order to free precursor metabolites for the production of TAGs. For example, Wang & others (2009) successfully measured an increase in the abundance of TAG lipid droplets in the C. reinhardtii starchless mutant (sta6), deficient in ADP-glucose pyrophosphorylase (an essential enzyme in starch production). Forty-eight hours after transfer to nitrogen-free media there was a 30-fold increase in lipid droplet content in the sta6 mutant, double that observed in the wild-type.

Genetic modification to improve the net photosynthetic efficiency of an alga has also been explored. Wild-type algal strains absorb more light via their light-harvesting apparatus than required for carbon assimilation, which has the effect of shading cells that are deeper in the culture, reducing total biomass accumulation. Targeted mutagenesis of C. reinhardtii genes responsible for components of the light-harvesting apparatus reduced the light absorption of cells. Cultures of the modified strains exhibited enhanced solar light capture. Although these are promising results, it is unclear how these mutations will impact the overall fitness of the strains, in particular in industrial settings, where they will have to compete with other organisms.

Laboratory algal cultures are grown in sterile, carefully controlled conditions. This is not feasible for industrial production, as no reactors are free from contamination. Practitioners testify to fouling and culture ‘crashes’, which require expensive and time-consuming sterilisation protocols. Colonisers, which are in the form of competitors (other algae), predators (for example, zooplankton or fungi) or bacteria can also significantly reduce yields, which has the knock-on effect of decreasing the economic and environmental sustainability of the operation. It is becoming clear that the process of ‘contamination’ is natural to environmental populations, such as lakes, which gradually increase in complexity over time, eventually reaching a state of dynamic equilibrium. The network of organisms within that community makes optimum use of all available resources and, by nature of its complexity, has no room for other species to establish. Consortia of microbes are often employed to increase yields, such as bacteria in anaerobic digestion or yeasts in fermentation, and it is likely that such an approach for algal cultivation may have similar benefits.

The potential that algae hold for offering a sustainable alternative to fossil fuels is not in doubt. Their growth rates and lipid productivities are unparalleled amongst photosynthetic organisms, and this is reflected in the policy incentives designed to facilitate algal biofuels to break into the fossil fuel market. The EU Renewable Energy Directive, which sets targets for the proportion of renewables required to contribute to the energy market, is being amended to value the contribution of algal biofuels as four times their energy content. This means that suppliers of biodiesel produced from algae will receive four times the amount of government support compared with growers of land-based oil crops.

However, one may view the development of algal biotechnology as akin to the development of wild plants into food crops, a task that did not happen overnight. We need to be realistic about the development trajectory of algal biofuels from laboratories to a commercial scale. The recently published A UK Roadmap for Algal Technologies urges investment in larger, strategically positioned open access test, pilot and demonstration facilities, which will enable this transition (Schlarb-Ridley & Parker, 2013).