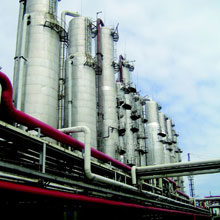 1-Butanol (butyl alcohol or n-butanol) is a four-carbon, straight-chained alcohol with a molecular formula of C4H9OH and a boiling point of 118 °C. 1-Butanol is an important chemical precursor for paints, polymers and plastics with a global market estimated to be 3 million tonnes per annum and worth approximately US$5 billion.

Most 1-Butanol produced today is synthetic and derived from a petrochemical route. Synthetic butanol production costs are linked to the propylene market and are extremely sensitive to the price of crude oil.

Renewable 1-butanol or biobutanol is produced from the fermentation of carbohydrates in a process often referred to as the ABE fermentation, after its major chemical products: acetone, butanol and ethanol. The ABE fermentation is a proven industrial process that uses solventogenic clostridia to convert sugars or starches into solvents under anaerobic conditions. The fermentation occurs in two stages: the first is a growth stage in which acetic and butyric acids are produced; and the second stage is characterised by acid re-assimilation into ABE solvents.

Biobutanol is an attractive and versatile liquid transportation biofuel. Biobutanol can be blended with petrol, diesel and even ethanol. It fits the existing fuel infrastructure, has a better energy density and performance than ethanol and can be made from more sustainable feedstocks than biodiesel. Therefore, biobutanol has the potential to substitute for both ethanol and biodiesel in the global biofuel market estimated to be worth US$185 billion by 2021, according to cleantech market intelligence firm Pike Research. In addition, 1-butanol can be dehydrated to 1-butene and catalysed into longer chain oligomers for jet fuel applications. 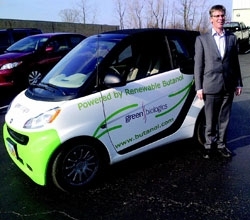 The ABE fermentation process was first developed in the UK in 1912 and commercial production quickly spread around the globe during the First and Second World Wars; first to produce acetone for ammunitions and then later to produce butanol for paint lacquers. The fermentation process fell out of favour in the USA and Europe in the 1950s when renewable solvents could no longer compete with their synthetic equivalents on price. Some production via fermentation remained in China, Russia and South Africa until the early 1980s.

China leads efforts to re-commercialise the ABE fermentation process using corn starch: over US$200 million has recently been spent on six to seven plants with a combined solvent capacity of 0.21 million tonnes per annum. Conventional distillation is used to recover solvents. Today, all the plants in China are idle, largely due to the high cost of starch. Green Biologics is working closely with Laihe Rockley on a commercial project in Songyuan, China (Fig. 1), to convert waste corn residues to solvents and, in June 2012, successfully completed a commercial trial at 3.2 million-litre scale. Approximately 50 tonnes of cellulosic-derived biobutanol was purified and shipped to the USA for chemical and biofuel testing. Biofuel performance has been validated using a ‘Smart’ car fuelled on 100% biobutanol (Fig. 2).

There are three technical constraints (yield, titre and productivity) that affect the commercial viability of ABE fermentation. The butanol yield and titre that can be achieved are largely a function of the microbe. There are four main species: Clostridium acetobutylicum, C. saccharobutylicum, C. beijerinckii and C. saccharoperbutylacetonicum. Performance can be improved using chemical mutagenesis, specific genetic manipulation or a combination of both techniques. Volumetric solvent productivity impacts plant size and capital cost. Green Biologics estimate that a twofold increase in productivity reduces capital expenditure by 20% together with significant reductions in operating costs. Solvent productivity can be improved by deploying fed-batch or continuous operation. For example, the Chinese semi-continuous fermentation process offers 40% higher solvent productivity than a conventional batch process. 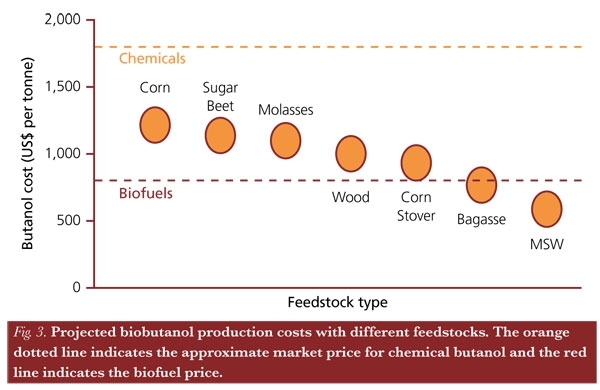 Feedstock selection also has a big impact on production cost (Fig. 3). In China, for example, corn starch contributes over 70% of the overall solvent production cost whilst energy for operations, including distillation, contributes 14% to the overall cost. Therefore, transition towards cheaper (non-edible) feedstocks offers the biggest opportunity for cost reduction. Utilisation of cellulosic and waste materials is more sustainable and offers greater reductions in greenhouse gas (GHG) emissions. Today, Green Biologics’ advanced fermentation process is economic on starch and sugar-based feedstocks when butanol is sold into the chemical market. Further cost reductions are anticipated from the utilisation of low-cost agricultural and forestry residues, including waste streams such as municipal solid waste (MSW).

The chemical market for 1-butanol is an excellent entry point for biobutanol because of the price premium. In order to penetrate the larger biofuel market, biobutanol still needs to compete on cost (priced on an energy basis) with ethanol despite biobutanol’s superior fuel properties. Reduction in feedstock cost offers the best opportunity, especially since clostridia are well suited for sugars derived from cellulosic material (they have a broad substrate range, including pentose sugars and tolerate typical feedstock inhibitors). 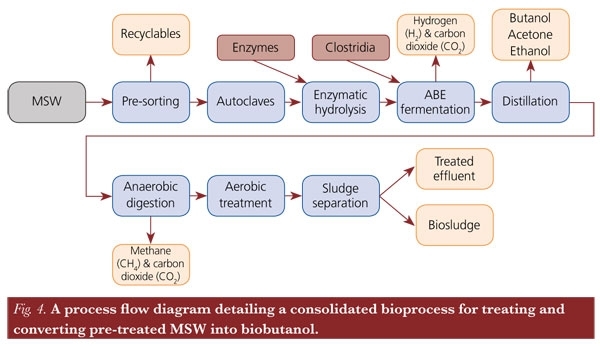 Green Biologics has determined the technical and economic feasibility of converting MSW to biobutanol in a two-year project supported by a grant from the Technology Strategy Board and performed in collaboration with AeroThermal Group Ltd, Biocatalysts Ltd and North Energy Associates Ltd. The partners developed, and demonstrated at pilot scale, autoclave pre-treatment technology, enzymatic hydrolysis and fermentation technology to produce biobutanol from MSW (Fig. 4). The key findings are:

The use of MSW as a feedstock opens up new commercial opportunities for advanced biofuel production in the UK and Europe. GBL is now investigating routes for commercial demonstration.