Degree awarding gaps in the biosciences 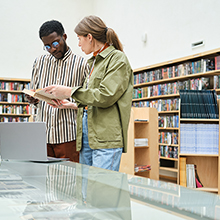 Does each undergraduate student get the degree they deserve? The answer is important not only for students and universities, but also for employers who expect someone’s degree classification to reflect their aptitude for work. The evidence unfortunately shows that some kinds of undergraduate students are awarded worse degrees than one would expect, given their entry qualifications.

That last qualifier is important. We might expect students who had received 3 Ds at A-level to be awarded worse degrees than those who had arrived at the same university with 4 A*s. After all, if there were no correlation between pre- and post-entry performance then universities would not set entry grade requirements for their courses. There is some correlation, though, so it makes sense to compare graduates who began their degree course with similar entry qualifications.

When we do this, we find that non-white students, and particularly black students, tend to be awarded worse university degrees than their white peers. We also find these ‘awarding gaps’ (also known as ‘attainment’ or ‘achievement’ gaps, particularly when referring to individual assessments or modules) among students from educationally disadvantaged backgrounds, disabled students and male students. Awarding gaps in the UK are usually expressed by measuring the percentage of students in a particular group who are awarded a first or upper second-class degree and comparing this percentage with a reference group. Data from 2020, for instance, show an average awarding gap of six percentage points for Black, Asian and minority ethnic (BAME) students compared with white students across ten UCAS entry tariff ranges, from around 48 points (equivalent to 1 A grade at A-level) to 207 points (roughly 3 A*s and a B at A-level). The gaps are even bigger among students who enter university without A-levels.

Awarding gaps are seen in all subjects. Although they are somewhat smaller in mathematical and scientific disciplines than in other fields, this comparison masks large variations between different subjects and different ethnic groups. The BAME awarding gap in the biological sciences was 11 percentage points in 2020. Although this value was not corrected for entry qualifications, doing so would not make it disappear; children from most ethnic minority groups, including black children, do better at school than their white peers. Why is this pattern reversed when they get to university?

This question is hard and can arouse political controversy, especially when it comes to ethnic group awarding gaps. Conservatives may argue that the reasons are found in the students’ cultural environment (e.g. the advice they receive on their degree and university choice) while those on the left often emphasize deficiencies in the university environment (e.g. racial discrimination on campus). Other demographic attainment gaps attract less attention but are no smaller: the male/female awarding gap in the biological sciences, for example, is as big as the BAME/white awarding gap. Empirically minded biologists may feel that debating the causes of these gaps is less urgent than deciding, based on evidence, how they can best be reduced.

In the classroom, university science educators can reduce demographic attainment gaps by engaging students in ‘active learning’ rather than by asking them to absorb knowledge from a traditional lecture. Active learning can involve problem-based learning, peer teaching, discussion groups, quizzes, or anything else that asks students to use and reinforce what they have learned. If the students have prepared for the class by reading, engaging with online materials and taking a pre-class quiz then the classroom has been ‘flipped’: students meet new material independently and extend their learning in class, rather than learning the content in the lecture and practising their skills afterwards. Using class time for active learning bears fruit for all students but particularly, it seems, for those on the wrong side of many awarding gaps. An educational group based in the Department of Biology at the University of Washington in Seattle has proposed the ‘heads and hearts’ hypothesis to explain why this is so. On the ‘heads’ side, demographically disadvantaged students might benefit from active learning because it supports their development of the advanced cognitive skills which distinguish higher education from high school. A student from an educationally disadvantaged background, for instance, can develop their problem-solving skills in structured and scaffolded classroom activities, whereas an advantaged student might start their course with a better idea of how to extrapolate those skills from traditional lectures. On the ‘hearts’ side of the hypothesis, students who are in a demographic minority might gain disproportionate benefit from the social side of active learning, gaining confidence and feeling included in a shared educational experience. Classroom activity that invites participation from all learners builds a community that boosts the performance of students who would otherwise feel out of place.

Interventions at the department and faculty level have also proved valuable in reducing awarding gaps. Mentoring, for instance, and other kinds of counselling, coaching and role-modelling activities are all linked to better outcomes for students. The most common scheme of this type is peer-mentoring, in which a more experienced student mentors a less experienced one. Some of the best evidence for the effectiveness of this approach in the UK comes from a 2014 study that measured the effect of peer mentoring on two matched cohorts of first-year undergraduate psychology students. Compared with unmentored students, mentored students felt they were more integrated into university life and were less likely to say that they wanted to leave ten weeks after they started their course. Although the mentoring scheme in this study did not target disadvantaged demographic groups, schemes that do have been associated with lower drop-out rates and awarding gaps.

Degree awarding gaps are the result of a complicated mix of social and academic factors, and we cannot eliminate them with purely local measures. It is universities that have made an institutional effort, coordinating several different kinds of interventions, that have made the most gains against the gaps. An example of this kind of holistic approach is seen at Kingston University, UK. Kingston has mixed four ingredients: organisational change, student support, an inclusive curriculum and a ‘value-added’ metric to monitor the awarding gap. First, organisational change: universities are big institutions, and it takes focused leadership, performance indicators and targets to make the fight against awarding gaps part of the culture. Second, they have targeted academic and pastoral support for students in at-risk demographic groups, including the kind of mentoring and role-modelling schemes described above. Third, the university has developed an inclusive curriculum in which all students can recognise themselves in every course, building their sense of belonging and boosting their confidence. Finally, Kingston has a learning analytics system that can measure, analyse and report on demographic attainment gaps down to the module level, so that teachers can change their teaching and see results. Other universities have emphasized different aspects of this model, but the recipe for success is recognisable – a blend of inclusion, support and pedagogy that is good for all students, but best for those least likely to get the degree they deserve.

If you would like to find out more about tackling demographic awarding gaps in our discipline and/or share your experience of doing so, please join us in the HUBS Bioscience Awarding Gap Network.

James began his academic career at the University of Oxford, UK, completing a doctorate in inorganic biochemistry. Following postdoctoral work at Yale University, James taught at Regis University (Denver, Colorado) before moving to Royal Holloway where he teaches, conducts pedagogical research and is the Head of the Department of Biological Sciences.

What advice would you give to anyone starting their academic career?

Be flexible. If you focus on disciplinary research then you will only be successful if you can change direction. You need to do what you love, but you also need to ask yourself where funding will come from and what is feasible at your institution. If you want to focus on teaching then you will need to try out new teaching techniques, cultivate your pedagogical interests and carve out a niche for yourself. Try out new things. You won’t be successful if you keep on doing the same thing.

Could you describe one of your typical work days?

If it’s term time then I might be teaching in the lecture hall or laboratory, but most days I start with an hour on Outlook, because I get a lot of emails. If I can reply to an email immediately I do so, if not I create a task or make time in my calendar to deal with it. The rest of the day is for meetings with staff and students, completing tasks on my Microsoft To Do list, and working on my own projects. I try to stick to 9–5 as far as I can, but my phone makes it easy to work outside those hours if I need to.