Publishing for the Community: A brief history of Microbiology 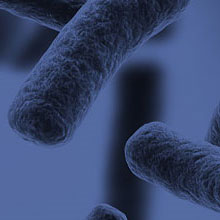 The Society for General Microbiology, as the Microbiology Society was called until 2015, held its inaugural meeting in February 1945. A new Journal of General Microbiology was fully envisaged at the time, but wartime conditions, including severe paper rationing, meant that it had to wait. In the event, the first Joint Editors were not formally appointed for another year, and the first issue appeared in January 1947. 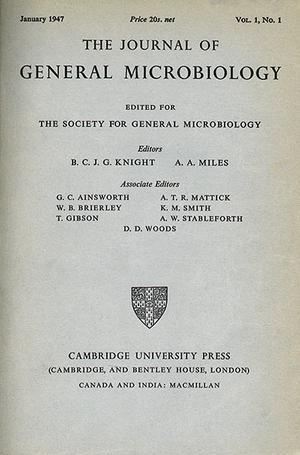 Actually, it didn’t. It appeared at the end of March 1947, after a series of delays at the publisher, Cambridge University Press (CUP), attributed among other things to the coal shortage and extreme weather conditions. Arguments about missed deadlines, and constant efforts to drive down the time between submission and publication of papers, were to be a constant theme in the history of the journal. The Society terminated its contract with CUP in 1980; then moved production back to CUP in 1993; but changed its mind again in 2002.

A second constant theme in the journal’s history was concern about the disciplinary mix of the papers it published. The journal was intended to cover fundamental research in all branches of microbiology, in keeping with the commitment to ‘general microbiology’. But the Society’s origins in agricultural bacteriology faded slowly, and a decade after launch the editors were still complaining that too many papers were bacteriological. The categories have changed, of course, as the science has developed, but the journal still thinks in terms of the individual disciplines or research themes that constitute microbiology: the members of its Editorial Board are listed under those themes, and papers are grouped analogously.

The third long-running strand in the journal’s history was, and is, money. At first, the journal was by far the Society’s biggest item of expenditure. It fairly quickly turned into the Society’s biggest source of income. Either way, it was central to all discussions about finance, and a constant worry. With no journal, the Society could not have grown to anything like its present status.

The Journal of General Microbiology was launched with a team of two Joint Editors (Gabe Knight and Ashley Miles) and seven Associate Editors (Geoffrey Ainsworth, William Brierley, Tom Gibson, Alexander Mattick, Kenneth Smith, Arthur Stableforth and Donald Woods). The only staff support was Miles’ secretary, who received an honorarium of £10 for each issue in recognition of the extra work it entailed for her. Arthur Standfast succeeded Ashley Miles in 1951, and he and Gabe Knight ran the journal until 1970, when they each retired and were made Honorary Members of the Society. 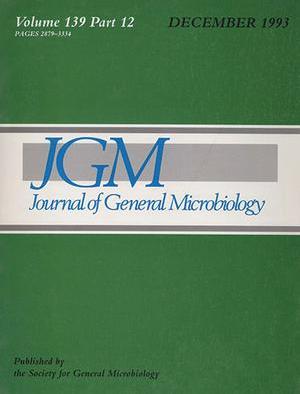 There were other structural changes around 1970: the introduction of the post of Editor-in-Chief; expansion of the Editorial Board and greater delegation of authority to it; and, crucially, recruitment of dedicated staff. By 1986, the Society employed about 20 full time staff, over half of them on the various journals. The Editorial Board eventually grew to almost 100 in number, essentially to deal with the growth in papers being submitted. Between 1947 and January 2022, 720 individuals served on the Board in one or more voluntary roles, some over protracted periods of time.

Like all long-running entities, the Journal of General Microbiology went through periodic makeovers. During the 1980s there was growing concern about its old-fashioned image and its vulnerability to new, commercially aggressive journals. So its appearance was tweaked in 1990 with a new two-column format, a larger (A4) page size and a new cover design. But mere visual appearance was not enough: in 1994 it relaunched under a new name, Microbiology, in response to fears that the word ‘General’ implied it was handling only the bits of microbiology left over from the more specialised (i.e. interesting) competitor journals. The subject categories used to organise material in the journal were brought in line with current research trends, and rejection rates were increased to show it was serious about quality. It would be another 20 years before the Society itself followed suit and dropped the word ‘General’ from its name.

But the biggest change came with the advent of electronic publishing. The Society appointed a full-time Systems Manager in 1995 to support its response to the challenges of new technology, as, like all learned society publishers, it scrambled to come to terms with the apparent opportunities and threats. By 1998, virtually all papers were being submitted, and edited, on disc, and from May 2000 Microbiology was made available on HighWire as a full electronic publication, in parallel with continuing print publication. Within a year, Microbiology Online was receiving 30,000 hits per week. In 2001, it went open access with all papers being free to read 12 months after publication. By 2003, 75% of papers were being submitted electronically as PDFs; this became compulsory in January 2004. Print publication finally ceased altogether in December 2019. 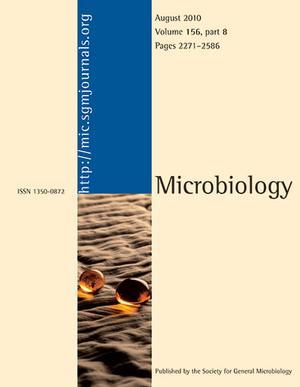 The journal saw itself as engaging with an international audience, and from time to time took steps to develop a more international persona. The Editorial Board started recruiting members from continental Europe in 1976, while the Society was developing relations with the Federation of European Microbiology Societies (FEMS). By 1994, when the journal was relaunched as Microbiology, 29% of Board members were based outside the UK; in the following five years, this figure was increased to 53% in a deliberate policy move. An office was opened in the USA to make it easier for researchers based there to submit papers.

These initiatives had an impact. In the later 1950s, about one-third of the papers published in the journal came from outside the UK, to the clear pleasure of the editors. In the 1970s and 1980s this figure rose to nearly half; in the 1980s it rose further to two-thirds, and to three-quarters in the 1990s. The early 2000s saw the non-UK proportion rise as high as 85%. This is in keeping with the Society’s international presence: its current membership of over 6,000 is drawn from over 100 countries around the world.