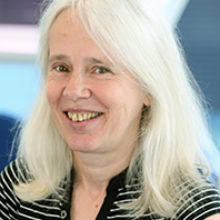 Professor Lynne Boddy, MBE, has spent her career researching the ecology of wood decay fungi. During this time, she has pioneered work on fungal communities and the decomposition dynamics of twigs, branches and trunks. Lynne is also an expert in fungal interactions and the manifold influences which affect the outcome, including three-way interactions with other organisms such as invertebrates and bacteria. More recently, her work has used transcriptomics, metabolomics and the production of volatile and diffusible organic compounds to dig deeper into the mechanisms of interaction. Lynne has boundless enthusiasm for sharing her love of fungi, be that through hands-on engagement events, media appearances or tirelessly mentoring early career researchers. She spoke to Sarah Christofides about winning the Fleming Prize in 1991 and her career since.

The work was on the ecology of wood decomposition, which had received relatively little attention previously. For my PhD I worked on wood decay processes as a black box, but I wanted to open the black box and look at the role of organisms in decay – not exclusively fungi, but mainly fungi, as they are the major agents of wood decomposition. I wanted to look at fungal communities because of the variation they cause in wood decay. Also, during my PhD I was working on the forest floor, but I realised that decay starts in the canopy, so we were starting in the wrong place. I wanted to look at fungal communities in the canopy.

When I worked at Bath with Alan Rayner, we started to look at communities in oak branches attached to the tree and found that very long fungal individuals develop very rapidly. It was hard to envisage how they could grow as quickly as they did, so we started to think that maybe they were already there. This is where the idea of latency came from; at the time, most people thought that trees were sterile inside. Our hypothesis was that the fungi were present as propagules and only developed when the water content in the wood declined and conditions were right. In Cardiff I went on to test those hypotheses. We chopped living branches into sections and let them dry down at different rates. In the ‘Goldilocks’ conditions where the water content was just right, there the fungi grew out. That came as a great surprise to many people and it took a lot of additional experiments to convince them that these weren’t just contaminants.

Around this time, we started some projects on cord-forming fungi using colonised wood blocks on soil trays, looking at foraging, fractal geometry, network analysis, translocation of nutrients and interspecific interactions. Those were new and exciting things, and I’ve carried on doing it for 30 years. It has produced exciting finds, such as that fungi have memory, and has revealed amazing things about fungal behaviour.

The canopy work has also set up 30 years of work on decay in standing trees, in all sorts of wood components. Lots of this was baseline data as no one had looked at it before: it was exciting because we didn’t know what we would find. In some ways, it was a tiny bit frustrating, as you had to get this baseline data before you could do anything more clever. Throughout my career people have said, “Surely we knew that already!”, but although it might seem obvious now, we didn’t know it at the time. I think that was why these things, which might seem simple, were so exciting and why I was lucky enough to be awarded the prize.

What questions arising from that do you still really want to answer?

Where do I begin? I still really want to know about cord formers: behaviour, memory, how messages are sent around the mycelium. I want to know the mechanisms of decay and how a fungus changes the wood so that incoming fungi experience altered conditions. To what extent do other wood decay fungi succeed brown-rot fungi and, if it is often limited, could this be a way of sequestering carbon? I want to know about tree root decay, as almost everything on decay so far has been done above ground. That’s important from both ecological and safety perspectives, to know whether a tree’s roots are sound. I’ve started working on heart rot in the centre of trees, which has been discussed since the 1800s, but is still not well understood. I still want to know much more about communities; we don’t really know anything about the end stages of community development, the late stages of decay. We have studied communities by isolating fungi from wood onto agar, which is easy for wood decay in the middle stages but can’t easily be done for late stages. Now we can use sequencing to start finding out what happens at the end stages when nutrients are released. That’s something else I want to know about: decomposer fungi sequester nutrients. But when are those nutrients released to the soil? There are some hints on how this happens, but so much more to know. In all, there’s enough for another lifetime or two!

How do you think public/scientific appreciation of fungi has changed over the course of your career?

I think things are improving. Fungi have got a bad name because people think they rot our food, our clothes and our homes, kill our crops and even have the cheek to grow on us and cause a lot of deaths in immunocompromised patients. Indeed they do, but without them the ecosystems of planet Earth would not work. In Britain, I think we are a mycophobic nation. We’re scared of fungi and don’t want to eat them (there’s nothing wrong with not wanting to eat fungi as it’s better to leave them in situ anyway, but it’s symptomatic of how mycophobic we are). I think that in the last few years the media has at last started to grasp the importance of fungi. They’re still regarded in second place to plants, whereas they are equal in driving terrestrial ecosystems, but I think it’s getting better. Several TV and radio programmes have devoted time to considering fungi, and I’ve just been asked to write a children’s book on fungi. Things are just beginning to change, but I think fungi still are – wrongly – regarded as the poor relatives of plants.

Well, I think that the playing field and goal posts have changed since then. I knew a lot of things, like how hard it was to get grants, but I didn’t know it was going to get harder. Lots of things for me have got easier; at the time I didn’t realise how hard it was being a woman in science, but hindsight shows it was very hard. Things have got so much better for women.

Scientifically, there are masses of things I wish I’d known! I’m not sure I would have approached things very differently though. I would still follow up the alleyways and exciting little directions, even those that proved dead ends, because at the time you don’t know where they will lead and it is all part of the scientific process.

What did it mean to you to be awarded the Fleming Prize?

It was important to me that fungi were appreciated as not just a ‘poor man’ to plants and – particularly for microbiologists – to other microbes. At the time fungal ecology was often regarded as going round with a collecting basket and making lists. My sort of fungal ecology was not like that at all. I don’t want to know just lists of what grows where, but what they’re doing, why and how they’re doing it.

I think we’ve answered that! Without fungi, the terrestrial ecosystems of planet Earth wouldn’t exist!