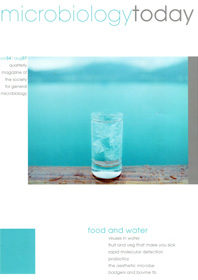 The lead articles of the August 2007 issue of Microbiology Today are on viruses in water; fruit and veg that make you sick; rapid molecular detection; probiotics; the aesthetic microbe; and badgers and bovine TB.

Viruses in water: the imaginative in pursuit of the fugitive (p. 108)

Persistent viruses in drinking and recreational water may cause many outbreaks of disease, but Peter Wyn-Jones explains how proving it is difficult.

Fruits and vegetables that make you sick: what's going on? (p. 112)

Robert Mandrell discusses how the safety of some salad crops has come into question following several recent outbreaks of disease.

Anja Boisen reveals how cheap, disposable devices to spot pathogens could soon be used by producers to improve the safety of food and water.

Lucy Goodchild takes a look at some stories that have hit the headlines recently.

Probiotics: weapons in the war against gut pathogens (p. 120)

Science in the fight against water-borne disease (p. 124)

Science has produced some powerful tools to ensure our water is safe. Joan Rose believes that, with political support, these could be used  to prevent contamination with faecal pathogens and eradicate some major diseases.

Microbes have served both as an inspiration for artists and as a canvas for their creations for centuries. Simon Park reveals how the boundaries between microbiology and art are becoming increasingly blurred.

Every year, the Microbiology in Schools Advisory Committee runs a competition for school students, with this year asking students to produce a leaflet about Salmonella and how to avoid it. Lucy Goodchild describes the judging event. Claire Willis discusses the merits of one-to-one partnerships between scientists and teachers, rather than the school.

Jane Westwell takes a look at the various opportunities for working in science communication. The Society speaks to Lucy Chappell, the Press and Communications Officer at the Health Protection Agency, in a Q&A format.

We are sad to announce the deaths of two great microbiologists, Professor Simon Baumberg and Professor Dr Miloslav Kocur.

The findings of an independent, extensive field experiment to determine the effect of badger culling on bovine TB have just been announced. Chris Cheeseman suggests that maybe culling is not the solution after all.