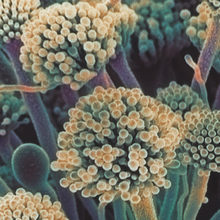 Fungi are widespread in nature and perhaps it is unsurprising that they are often viewed as the benign eukaryotic members of the microbe world. They are responsible for some of the staples of modern living as well as artisan foods, such as leavened bread, blue cheese, craft beer and vintage wines. However, fungi are also responsible for diseases that threaten our food crops and lead to significant economic losses.

Naresh Magan and Angel Medina explain how fungi produce mycotoxins that include some of the most toxic naturally-produced compounds found in food. The authors outline how recent predictions suggest that pests and fungal pathogens are moving at the rate of 5–6 km per year from the equator to the poles with the Earth’s changing climate. These new conditions increase the risks of contamination in certain regions that are considered to be ‘bread baskets’ for food production, which may lead to increased contamination levels by existing mycotoxins, or emigration of other mycotoxins to new regions.

It is not just our food crops that are being impacted by fungi but some of our best-loved woodland trees. Anne Edwards and Allan Downie describe how it became evident that ash dieback disease had established in native woodlands in the east of the UK. They highlight how an open access and crowdsourcing approach led to the establishment of a website (http://oadb.tsl.ac.uk/) used to record new observations about the disease’s spread. It also provided access to scientific data, generated by scientists who were establishing a foundation of knowledge (using genome analysis) about this pathogen and the tolerance (resistance) map of our native ash trees to this disease.

Fungi are also responsible for revolutionising modern medicine and health; the first clinically important antibiotic was produced by a famous fungus, Penicillium notatum. However, there is a dark side to fungi when it comes to human health. The Centers for Disease Control and Prevention states that “fungal infections that are resistant to treatment are an emerging public health problem”. Although fungal infections contribute significantly to human morbidity and mortality, their impact on our health is not widely recognised. We have addressed this concern in this issue. Firstly, Neil Gow, Ingrida Raziunaite, Fiona Rudkin, Katja Schaefer and Bhawna Yadav have written an article that highlights how Candida thrive as harmless commensal organisms in our oral cavities, gastrointestinal or urogenital tracts and more rarely on the skin. Around 50% of us are colonised at any one time without any noticeable symptoms, but these organisms are opportunistic pathogens that cause infections when our immune system is compromised, or our protective bacterial microflora is depleted.

Candida is not the only fungus causing recent global concern. Since the 1980s, cryptococcal infections have emerged as another major threat to human health as a result of the HIV/AIDS pandemic and a more widespread use of immunosuppressive therapies. Paula Seoane, Rafael Schneider and Robin C. May describe how Cryptococcus neoformans and Cryptococcus gattii spores are inhaled, leading to problems ranging from skin irritation to blindness; these infections account for almost one million infections per year and around 650,000 deaths.

Finally, Paul Rowley’s article turns the tables on fungal infections, examining how there are mycoviruses that infect many important fungi, but often do not cause obvious disease within their host. Instead it appears that many mycoviruses are beneficial to fungi. This may explain the widespread distribution of mycoviruses throughout all fungal taxonomic groups.

Sowmiya Moorthie and Leila Luheshi from the PHG Foundation, an independent thinktank with a special focus on genomics and other emerging health technologies, provide this edition’s Comment. They discuss how low-cost whole genome sequencing technology is beginning to transform the way clinical and public health microbiologists and epidemiologists manage the threat of infectious diseases.

As advances in technology impact upon our health and our climate, it is clear that fungi will continue to demand our respect as they pose significant threats to both our environment and our wellbeing. However, as this edition highlights, effective investment in research and developments in technology may also provide at least some of the answers and solutions to this growing problem.