From peaches to patients: the many faces of cryptococci 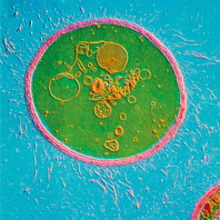 Human diseases caused by fungal pathogens have long been neglected as a medical problem, but the dramatic increase in immunocompromised individuals over the last 50 years, resulting both from the HIV/AIDS pandemic and more widespread use of immunosuppressive therapies, has led to an annual toll of over 2 million deaths due to fungal infections. Additionally, over 300 million people are chronically infected by fungi, leading to problems ranging from skin irritation to blindness.

Amongst the life-threatening fungal pathogens, Cryptococcus neoformans and its close relative Cryptococcus gattii account for almost 1 million infections per year and around 650,000 deaths. Cryptococcal infections were recognised as a major threat only in the 1980s with the emergence of AIDS, but, in fact, the organism had been first isolated in 1894 by an Italian researcher, Sanfelice, from fermented peach juice and, in the same year, from a patient with a chronic granuloma.

Both pathogenic Cryptococcus species are found in a diverse range of niches in the environment, particularly in decaying vegetation of several tree species. C. neoformans is also found in bird faeces, which partly explains the high incidence of this species in urban locations.

Cryptococcosis results from inhalation of fungal cells or spores from the environment, causing subsequent lung infection. The first step to disease development is the arrival of fungal cells deep in the alveoli of the lung. Consequently, desiccated yeast cells or spores are considered the most important infectious propagule due to their small size (~3 µm) in comparison to active yeast cells (4–10 µm), since only small cells can penetrate so far into the lung. In most individuals this initial pulmonary infection is rapidly contained, but in people lacking an appropriate immune response, the infection can spread to the blood and central nervous system, causing meningoencephalitis, which is rapidly fatal without treatment.

The ability of these environmental fungi to cause human infections is underpinned by a number of classical virulence factors, most notably the production of a polysaccharide capsule (Fig. 1) which protects Cryptococcus from phagocytosis, and the production of melanin pigment, which protects the fungal cell from oxidative damage. Perhaps most remarkable, however, is the ability that cryptococci have to evade immune activation. 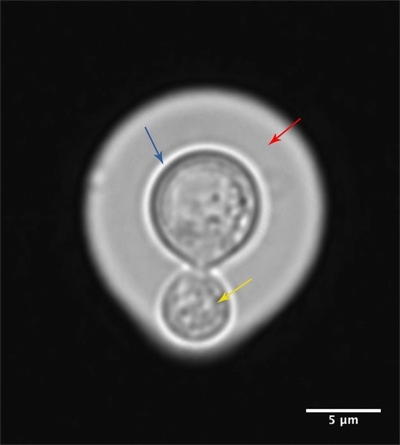 How does Cryptococcus evade the immune system?

Normally, exposure to fungal cells triggers a potent inflammatory response. However, Cryptococcus yeast cells are remarkably immunologically inert. Not only do they fail to elicit pro-inflammatory cytokines from dendritic cells (as opposed to other fungi such as Candida albicans), they actively promote the production of anti-inflammatory cytokines such as IL-10 or IL-4. This cytokine profile enables Cryptococcus to repolarise the immune response, reducing the so-called Th1 response (a potent inflammatory and antimicrobial response, which is particularly effective in eradicating intracellular pathogens) and instead shifting towards a Th2 profile, an inflammatory state that is targeted towards large pathogens such as parasitic worms and is ineffective at removing single-celled pathogens such as cryptococci. In parallel, a proportion of the infecting yeast cells expand dramatically in size to form giant or ‘titan’ cells. These cells are thought to arise from replication without concomitant mitosis, since they are polyploid and uninucleate, and block phagocytosis both of themselves and, interestingly, of normally-sized neighbouring cryptococci via a mechanism that is not yet characterised.

If these strategies all fail and the invading fungus is engulfed by host phagocytes, cryptococci are able to engage an extra line of defence and persist as facultative intracellular pathogens (Fig. 2). Once inside the host cell, Cryptococcus cells have developed numerous mechanisms to both reduce the antimicrobial properties of the phagosome and to neutralise the low pH and reactive oxygen species that are abundant in this organelle.

Once established within the phagocyte, cryptococci are able to replicate rapidly but can also escape the macrophage via an intriguing non-lytic exocytosis, also known as vomocytosis (Fig. 3). Following vomocytosis, both the expelled cryptococci and the macrophage are undamaged. Thus this escape mechanism ensures minimal proinflammatory signaling, and is therefore thought to pose an advantage over lytic escape. 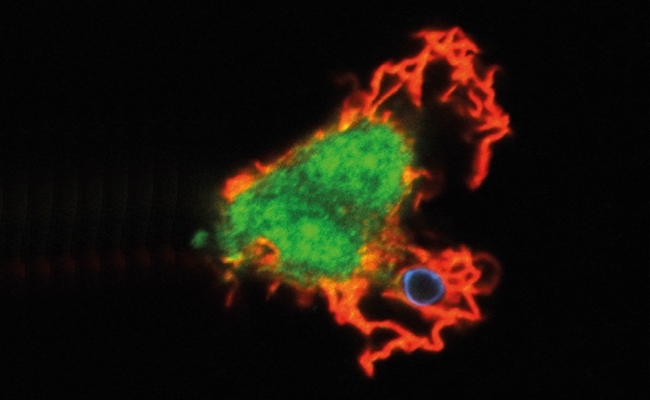 FIG. 3. TIME-LAPSE IMAGES OF J774 MACROPHAGES INFECTED WITH GFP-TAGGED CRYPTOCOCCUS NEOFORMANS EXEMPLIFYING INTRACELLULAR REPLICATION (A), LYTIC ESCAPE (B) AND VOMOCYTOSIS (C). THE TIME POST-INFECTION IS SHOWN IN EACH PANEL. 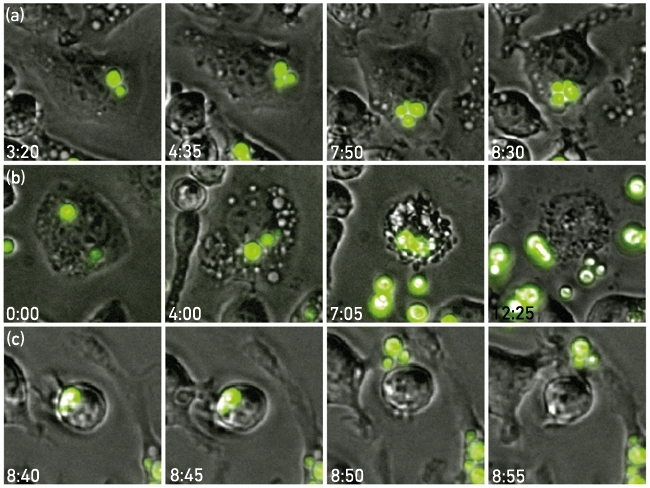 How does Cryptococcus reach the brain tissue?

The most dangerous consequence of cryptococcal infection is meningoencephalitis, resulting from dissemination of the fungus to the central nervous system. To infect this immune privileged site, cryptococci must exit the lungs, enter peripheral blood circulation and bypass the blood–brain barrier (BBB). It now appears that cryptococci accomplish this feat in three ways (Fig. 4). Firstly, yeast cells can make their way through tight junctions of the endothelial cells using proteases such as Mpr1, in a process called paracytosis. Secondly, yeast cells can infiltrate the BBB by transcytosis, a process that is mediated by the interaction between hyaluronic acid in the cryptococcal surface and CD44 present in the luminal endothelium, resulting in direct uptake of the fungus by endothelial cells and migration through the cell’s cytoplasm to reach the brain tissue opposite. Finally, a third possibility involves cryptococci crossing the BBB whilst concealed within phagocytes, a so-called ‘Trojan Horse’ route. Evidence supporting this mechanism comes from studies in mice where depletion of alveolar macrophages significantly reduced cryptococci burden in the brain tissue and direct infection with Cryptococcus results in lower dissemination to the brain than adoptive transfer of infected monocytes. 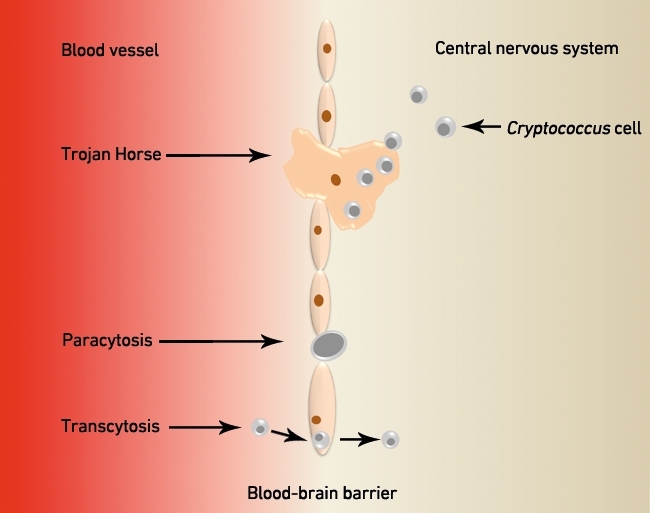 One of the most remarkable findings of recent years has been the use of comparative genomic/phenotypic studies to reveal subtle differences in the biology of different cryptococcal lineages. Typically, infections with Cryptococcus gattii, although much rarer than Cryptococcus neoformans infections, cause more aggressive disease symptoms and respond more slowly to antifungal drugs. However, within each species certain lineages appear to be more pathogenic than others. For instance, the VNB lineage of Cryptococcus neoformans is associated with poorer patient outcomes than other strains. Most dramatic, however, is the involvement of the VGIIa lineage of Cryptococcus gattii in a large cryptococcosis outbreak that started in 1999 on Vancouver Island, Canada. During the following decade, 236 human cases with 19 deaths were reported, almost none of which were in people with classical immune-compromising conditions. Now known as the Pacific Northwest Outbreak, this disease cluster now represents the most serious outbreak of invasive fungal disease in the healthy population to date. It now appears that the high pathogenicity of this lineage results from a novel ‘division of labour’ virulence mechanism in which cryptococcal cells collaborate to drive extremely rapid intracellular proliferation and thus overwhelm the host, even in the presence of a fully functional immune response.

Since its recognition as a major threat to human health in the 1980s, research on Cryptococcus has highlighted the extraordinary range of virulence factors used by this organism to drive disease. In particular, its ability to modulate host immunity and to enter the central nervous system by hiding inside macrophages has revealed unique aspects of host–pathogen biology. Intensive ongoing genetic, cell, biological and clinical investigations offer the prospect of us soon learning much more about this enigmatic human pathogen.

The authors would like to thank Dr Ewa Bielska for providing the image for Figure 1 and Dr Jenson Lim for Figure 2. The authors are supported by funding from the Darwin Trust of Edinburgh (P.S.), the Science Without Borders Program – CNPq (R.S.) and the European Research Council (R.C.M.).

PAULA I. SEOANE AND ROBIN C. MAY

Institute of Microbiology and Infection & School of Biosciences, University of Birmingham, Edgbaston, Birmingham B15 2TT, UK

Johnston S. A. & May R. C. (2013). Cryptococcus interactions with macrophages: evasion and manipulation of the phagosome by a fungal pathogen. Cell Microbiol 15, 403–411.