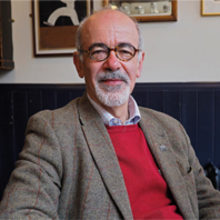 The Microbiology Society has a long-standing history and a role has been created to ensure the knowledge in the Society archives is maintained. The role has been taken up by Gilbert Shama. We asked him about his background and what intriguing items he has found in the archives during the initial stages of his research.

Where are you currently based?

I am currently working in the Department of Chemical Engineering at Loughborough University.

What is your area of specialism?

I am involved in a number of activities; they mainly are concerned with eradicating micro-organisms from various media and environments. I started quite a few years ago with UV light as a means of sterilising liquids, and then extended my research to include the surfaces of solids including foods. More recently I have been investigating the elicitation of hormetic responses in fresh produce as a means of preventing food wastage through fungal spoilage. I’m also working closely with electrical engineers on the application of atmospheric pressure gas plasmas for similar applications to those described above in relation to UV.

Tell us about your education to date

Where did your interest in microbiology come from?

I didn’t study biology at school, but became introduced to microbiology through biochemical engineering which I studied as part of my first degree and, I suppose one could say, became hooked!

What will your role as Honorary Archivist involve?

The Society will be celebrating the 75th year of its foundation in the year 2020 and the post was created principally with this anniversary in mind. I am looking forward to working with the staff of the Society as they prepare for 2020, and also in meeting with Society members and hearing their views as to how the occasion should be marked.

What made you apply for the role of Honorary Archivist?

The prospects for communicating the history of the Society and the achievements of its members to both the current and future generations of microbiologists as well as to the public at large.

What is the most interesting item you have found in the archive so far?

I was examining a photograph at the Society offices of what I believe is an unpublished photograph taken at the International Congress for Microbiology in 1936. I was scanning the sea of faces of the attendees seated round tables at what must have been the Congress Dinner when the face of Alexander Fleming jumped out at me – it was as though I had encountered an old friend!

What are you most looking forward to finding in the archives?

What excites me most about going through archives is simply not knowing what one will come across – coming face to face with the unexpected.

What most excites you about the history of science?

I would say uncovering previously unknown facts but also making novel connections between the past and the present.