Candida : living with a killer fungus 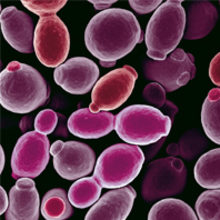 If you are sneezing your way through winter and wondering whether your immune system is functioning well, then realise that it is at least holding at bay a fungus that colonises most of us, and kills more than 50,000 immunologically vulnerable people every year.

Recent medical advances in the treatment of cancer, trauma, organ failure, HIV and other conditions save many people who years ago would not have survived. These are the new group of patients who are vulnerable to attack by killer fungi, including about a half-dozen species of Candida, that profit from any weakness in immunity and health. These species collectively account for the fourth highest burden of human bloodstream infections (around 250,000 each year), of which as many as 40% may not survive. Unfortunately, these organisms do not have a large community of microbiologists backing up our need to know more about them. But we are gradually learning how to hit harder with better drugs, to diagnose earlier and to understand the underpinning immunology of fungal infections.

Candida species are yeast-like fungi, which normally thrive as harmless commensal organisms in microbiota of the mucous membranes of the oral cavity, gastrointestinal tract or urogenital tracts and more rarely on the skin (Fig. 1). Typically, around 50% of us are colonised at any one time without any noticeable clinical symptoms. However, these organisms are also extremely serious opportunistic pathogens that cause infections when the immune system is compromised, immune barriers are breached or the protective bacterial microflora is depleted. In otherwise healthy individuals, Candida species can establish superficial mucosal infections called ‘thrush’ or ‘yeast infections’. However, patients with severely weakened immune systems due to injury, surgical trauma, organ transplantation, long-term antibiotic or chemotherapy treatment, or those with inherited genetic mutations in protective immune signalling pathways, have increased risk of developing more severe forms of disease that can include life-threatening invasive bloodstream or systemic infections. The use of medical implants and central intravenous catheters can also lead to formation of elaborate Candida biofilms, which seed bloodstream infections that are difficult to dislodge and are more resistant to antifungal drugs. Another risk category is those fighting other immunosuppressive diseases, such as HIV/AIDS, which has created a vulnerable worldwide population of millions of people who are susceptible to infections from Candida and other fungi, like Cryptococcus.

FIG. 1. CULTIVATION OF YEAST CELLS OF CANDIDA ALBICANS IN THE LABORATORY. 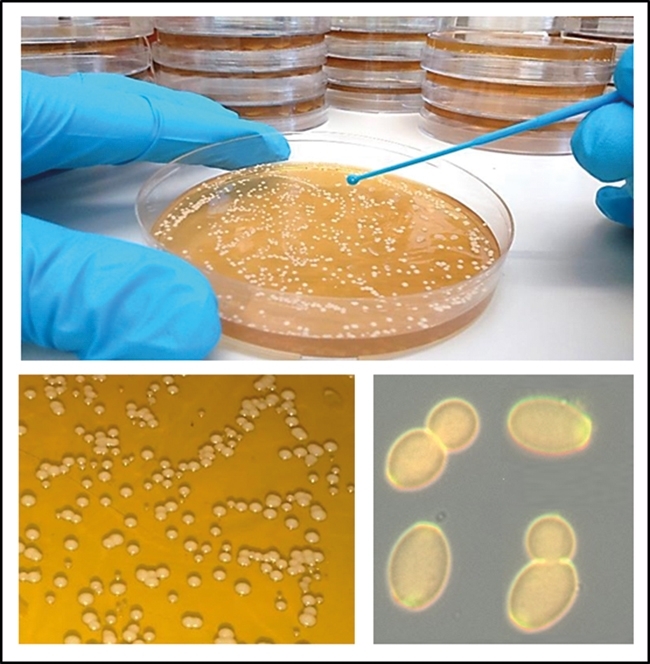 Superficial infections of mucosal surfaces are extremely common, occurring in ~25% (~1.7 billion) of the healthy population globally. Around 50–75% of women in their childbearing years suffer at least one incidence of vulvovaginitis and 5–8% (~100 million) women have at least four thrush episodes annually. A further 10 million cases of oral thrush and 2 million cases of oesophageal are added to the annual disease burden by HIV/AIDS and other mitigating factors. Although less frequent than superficial infections, invasive fungal infections have high mortality rates, often worse than those of bacterial and viral diseases. During these systemic infections, Candida has the potential of colonising almost all organs of the human body, leading to life-threatening invasive organ failure and pathological immuno-inflammation (Fig. 2). Annually, candidaemia causes more than 50,000 deaths and is the fourth most common cause of bloodstream infections. More than 250,000 people worldwide are affected by invasive candidiasis, and mortality (up to 37–44%) remains high despite the availability of antifungal drugs. 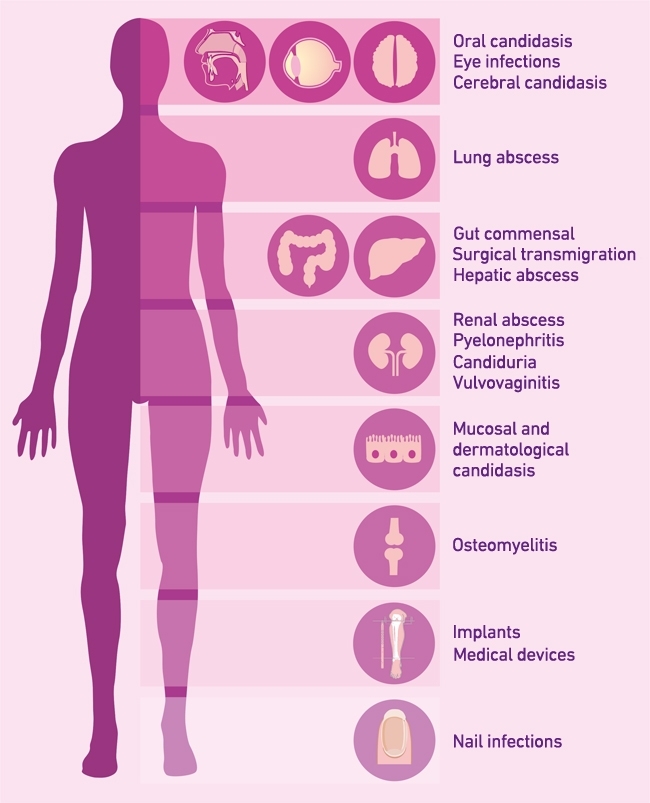 At the time of writing, more than 1,300 papers were published on Candida in 2015 alone. This high research activity in the field is yielding fascinating new insights into these pathogens. Human genomics has revealed mutations in human genes such as dectin-1, CARD9, AIRE, IL-12R, STAT1, STAT3, which contribute to susceptibility to Candida infections. These observations help us understand the signalling pathways that govern antifungal immunity. A major recent discovery has been the first example of a membrane pore-forming toxin of Candida called Ece1 that helps explain why the hyphae of Candida albicans cause tissue damage. We are beginning to learn how Candida in the gut contributes to the immunomodulatory influence of the gut microbiome and how the fungus adapts during human infection and sidesteps immune surveillance. It was shown recently, for example, that Candida albicans generates a specialised GUT form that is adapted for commensal carriage in the intestine. We are also beginning to understand why our immune systems struggle to keep up with Candida infections because its cell wall constantly changes its surface properties and is therefore a moving target for our phagocytic white blood cells. Next generation genome sequencing, and a constantly improving set of genetic tools including CRISPR Cas9, are making our knowledge of the connections between the Candida genotype and (pathogenic) phenotype ever more accessible.

Diagnosing invasive Candida infection is challenging because symptoms are often non-specific. Current methods rely primarily on blood culture, which is slow and of limited sensitivity. PCR, serological and proteomic-based methods have been a valuable addition to diagnostics in reducing sample turnaround time and increasing sensitivity. However, these methods do not always discriminate Candida colonisation and invasion. Because late diagnosis equates to a poor prognosis, the focus on improving diagnostics is a clinical need as important as generating new antifungal drugs. In addition, the development of diagnostic tests which are cheap and portable to low-income countries in field hospital conditions is urgently required.

Disappointingly, the recent introduction of new antifungal therapies has only had a relatively minor impact on the mortality rates associated with invasive candidiasis. This is in part a knock-on effect of suboptimal diagnostic testing together with drug-associated limitations such as emergence of resistance, toxicity, drug–drug interactions and problems in the route of drug administration. At present, the pipeline of new antifungals is being developed by predominately smaller biotechnology companies rather than Big Pharma, and the focus of their work has been mainly, but not exclusively, on improving the efficacy and half-life of already approved classes of antifungal drugs. In 2015, two new antifungals have emerged – an echinocandin (CD101 IV [Biafungin] – under development for Candida) and new triazole (isavuconazole – now licenced by the FDA and in Europe for Aspergillus and Mucor), both with improved clinical characteristics in various patient settings. Of course, it would be extremely valuable to be able to prevent infection through vaccination of vulnerable patients. However, research into fungal vaccines has lagged behind that of other pathogens and there are currently no antifungal vaccines approved for clinical use. A new generation of experimental vaccines based on Candida-specific and pan-fungal cell wall components are beginning clinical trials. Two of these target recurrent vaginal Candida infections (NDV-3 [Novadigm] and PEV-7 [Pevion]), and several others have shown efficacy in pre-clinical animal models of infection. In addition, novel immunotherapies which boost antifungal immune competence may be part of future options in antifungal treatment. As we move forward, addressing these research areas is likely to be of upmost importance if we are to reduce the global burden of fungal infections and make inroads to the rather grim statistics relating to candidiasis and medical mycology in general.