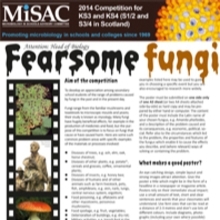 Ten years ago, Moore et al. (2005) concluded that the most likely answer to the question “how much are your children taught about fungi in schools?” was “very little or nothing at all”. They remarked that the word ‘fungus’ did not appear in the then current National Curriculum for England Programme of Study for Science, and although fungi tended to be treated reasonably in the specifications for the GCSE Biology examinations, the references were largely along with bacteria as decomposers without reference to the basic distinction between the two groups.

The situation is a little better today but a feeling of missed opportunities to learn about a group that is of fundamental importance to so much of everyday life remains among the sadly dwindling numbers of professional mycologists as well as by concerned observers.

Much effort has been made by the British Mycological Society (BMS) in attempts to remedy the situation by lobbying educational advisers to examination boards and producing a range of classroom resources and materials, e.g. Fungi 4 Schools. In addition, BMS is a sponsor of the Microbiology in Schools Advisory Committee (MiSAC) whose activities show that whatever the position of formal mycology education, there is an untapped interest and enthusiasm for the subject in schools. The evidence lies in the high level and quality of responses to the MiSAC Annual Competition when a fungal topic is featured.

The annual competition is one of the main activities of MiSAC, an organisation founded in 1969 following a joint initiative by the Society for General Microbiology (now the Microbiology Society) and the Society for Applied Bacteriology (now the Society for Applied Microbiology, SfAM). The other main activities are developing information resources and practical activities, giving talks and workshops, providing advice through a helpline, and serving as a recognised authority on health and safety. MiSAC is a voluntary organisation funded by annual sponsorship from BMS, CLEAPSS, Microbiology Society, National Centre for Biotechnology Education, Quekett Microscopical Society, SfAM and Scottish Schools Education Research Centre.

The competition receives additional special sponsorship for prize money and administrative costs, usually from one of the annual sponsors. There are two entry groups, Key Stage 3 and Key Stage 4 (equivalent to ages 11–14 and 14–16, respectively), which attract entries from throughout the UK and often some from Ireland and British schools in Europe. Each year’s topic is linked to the National Curriculum but the requirements are framed to encourage students to explore beyond its boundaries. The topics range widely over areas such as environmental issues, health care, food production and food safety. Other topics have involved producing a social media profile for a microbe and a requirement to use a microscope. The requirements specify a particular format, e.g. information leaflet, poster or news article, and target group, e.g. classmates or the general public. The requirement for 2016, the 28th competition and funded by SfAM, is to produce a news story for an internet news media site on ‘How microbes work for us’.

Fungal topics in the UK

BMS has funded the following MiSAC competition topics: ‘Fungi: friends and foes’; ‘I’ve got you under my skin: Fungal infections of the human body’; ‘Fungi in your shopping trolley’; ‘Medicines from fungi’; ‘Helpful and harmful fungi’; and ‘Fearsome fungi’. It is encouraging to report that the number and quality of the entries is always on a par with those on other aspects of microbiology.

In view of the theme of this issue of Microbiology Today, it is appropriate to provide a flavour of the student experience by reference to ‘Fearsome fungi’, the topic in 2014. The objective was to produce a poster to inform classmates about one fungus of choice in a specific event of historical importance or more recently newsworthy. As usual, a list of possibilities was provided for guidance. Those who chose an historical event referred mainly to the Irish potato famine (expressly allowed for purposes of the competition), the Witches of Salem and the First World War. Those who focused on a more recent or present day problem referred mostly to poisonous and psychedelic mushrooms, diseases of the skin and lungs, and losses affecting bees, frogs, crops and trees.

While visiting Southeast Asia over several years to conduct mycology research, one of us (M.W.) has taken the opportunity to discuss the teaching of microbiology in schools in Thailand, Malaysia, South Korea, Taiwan and China. This involved meetings with government officials, presenting UK teaching materials including those produced by MiSAC and BMS to teachers and for teacher training, and co-producing a range of microbiology educational resources in some of those countries in collaboration with educational institutes.

One particularly successful approach was to introduce the concept of competitions for students by using the well-established MiSAC model. This work bore fruit first of all in Thailand in the form of competitions on fungal topics for students aged 14–16 in 2014 and 16+ in 2015. They were jointly sponsored by the Institute for the Promotion of Science and Technology Teaching (IPST, part of the Thai Ministry of Education), BMS and MiSAC, of which the latter two provided financial support and organisational expertise, respectively.

The purpose of the competitions was to produce public information posters on ‘Helpful and harmful fungi’ (2014) and ‘Fungi and healthy living’ (2015). The latter topic was particularly interesting to us in the UK in that most entries focused on the Asian tradition of using fungi such as shiitake or Ganoderma lucidum for enhancing health whereas responses to a similar theme in the UK gave most attention to mycoprotein, the normal gut flora and probiotics, although oriental foods were not entirely neglected.

The competitions were arranged to coincide with international mycology conferences held in Bangkok (10th International Mycological Congress in 2014) and in Khon Kaen (Mycology in Southeast Asia in 2015), and attracted entries from all over Thailand. Successful posters were displayed on, and winners participated in, the final day of the conferences where they explained, in English, their choice of approach for the poster and were presented with money awards and certificates by the President of BMS.

The success of the two competitions has been such that IPST intends to make it an annual event for Thai schools. Furthermore, a similar competition, supported by BMS and MiSAC, is currently being organised in China in 2016 to coincide with the International Mycology Meeting in Changchun, Manchuria. 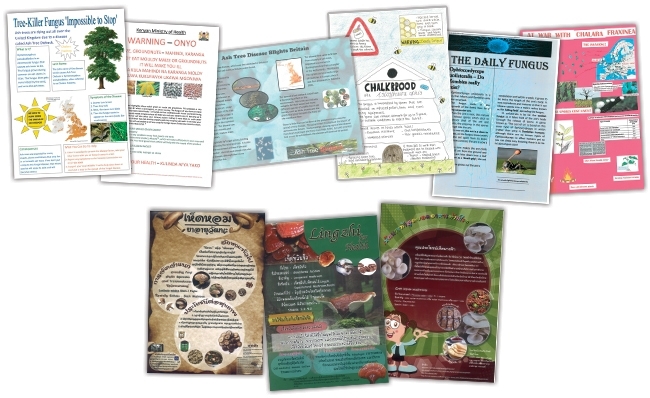