The hidden viruses of the fungal kingdom 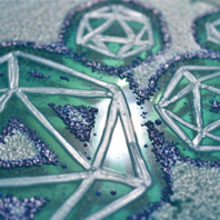 There are countless examples of plant, animal and bacterial viruses that cause severe symptoms of disease, sometimes with considerable socio-economic consequences. Viruses of fungi, otherwise known as ‘mycoviruses’, infect many medically and commercially important fungi, but often do not cause obvious signs of disease.

Mycoviruses may have evolved to minimise their burden upon fungi because their entire life cycle occurs exclusively within their host cell. Specifically, mycoviruses replicate within fungi but are never released from infected cells to the environment. Mycoviruses are transmitted to a new host by cell division or cell-to-cell fusion. Consequently, if a mycovirus were to cause severe disease, this would profoundly limit their own replication and spread, as their survival is inescapably linked to the success of their host. The apparent benign nature of mycoviruses may potentially explain their widespread distribution throughout fungi. However, fungi have not ‘rolled out the welcome mat’, as they mount many potent antiviral defences to limit mycovirus replication and spread. Similarly, mycoviruses can subvert fungal antiviral defences through a variety of fascinating mechanisms. The study of mycoviruses offers many unique scientific and commercial opportunities, including the use of mycoviruses and their toxins to control pathogenic fungi, and as a model system to study the fundamental principles of virus–host interactions.

In contrast to viruses of plants, animals and bacteria that were first described around the beginning of the 19th century, mycoviruses eluded detection by scientists until the 1960s. This was mainly because most fungi infected with mycoviruses do not exhibit any hallmarks of a ‘typical’ virus infection, such as cell lysis or extracellular disease transmission. Mycoviruses of microscopic fungi were first discovered within antibiotic-producing strains of the Penicillium genus. These mycoviruses were only identified because their double-stranded RNA genomes elicited an immune reaction in animals experimentally injected with extracts from infected Penicillium species. Similarly, ‘killer fungi’, that produce antifungal toxins, were described well before the characterisation of the mycoviruses that are responsible for toxin production.

Persistent virus infection requires that a virus replicates efficiently and spreads within a host population. Fungi encode a variety of antiviral mechanisms that target mycoviruses to disrupt these processes, while mycoviruses have evolved countermeasures to subvert them.

One example of a potent antiviral mechanism within fungi is RNA interference (RNAi), which recognises and processes mycovirus double-stranded RNAs, leading to the inhibition of mycovirus replication. Disruption of RNAi within fungi can lead to excessive mycovirus replication, resulting in the dilapidation of fungal colonies. Several mycoviruses are known to interfere with fungal RNAi to prevent the inhibition of their replication. In the absence of an active RNAi system, fungi have been shown to leverage alternative pathways to limit mycovirus infection. For example, within Saccharomyces cerevisiae the SKI genes target mycovirus RNAs for degradation. Mycoviruses counter SKI genes by protecting their RNAs with folded RNA structures, RNA modification or by stealing protective ‘caps’ from host RNAs. ‘Vegetative incompatibility’ is another striking example of how fungi protect themselves from mycoviruses by preventing cell-to-cell fusion between unrelated fungal species. This often creates a line of demarcation between two incompatible fungi, usually due to cell death, blocking mycovirus transmission.

From an evolutionary standpoint, competing virus–host interactions are known to select for the accumulation of mutations that benefit either the host or the virus. For example, if a mycovirus were to steal a fungal protein to aid in its replication, evolution would select for mutations within the fungal protein that would prevent its acquisition by the mycovirus. Faced with an altered fungal protein, compensatory mutations may arise within the mycovirus that again allows the hijack of the fungal protein. This back-and-forth antagonistic evolutionary cycle can be thought of as a biological arms race, which leads to signatures of evolution that can be detected by statistical methods. There is some evidence of arms race dynamics occurring within fungi; however, their relevance to mycovirus infection remains to be investigated.

The budding yeast S. cerevisiae is an important producer of fermented foodstuffs and is chronically infected with several different types of mycoviruses. As a result of infection by mycoviruses, ‘killer’ Saccharomyces yeasts secrete protein toxins that kill competing fungi. In the laboratory, killer strains cultured on solid growth media produce dramatic clear zones free of other yeasts. These antifungal toxins are produced by satellite double-stranded RNAs that are dependent on the Totiviridae family of mycoviruses for their stable maintenance. Satellite RNAs ‘steal’ proteins that are produced by totiviruses and use them for their own replication. Alone, totiviruses have a minimal impact upon S. cerevisiae, but the additional presence of satellite RNAs provides an important example of a beneficial virus system.

Viral killer toxins have been described within many fungi, but there are also examples of killer toxins produced from double-stranded DNA linear plasmids and the genomes of some fungi. Killer toxins can have a very broad host range and kill important human and plant pathogens, but the commercial use of these toxins is often limited due to low environmental stability, narrow host range and potential toxic side effects. However, there has been some success in the production of novel antifungal antibodies and peptides derived from killer toxins and the use of killer fungi as biocontrol agents in agriculture. 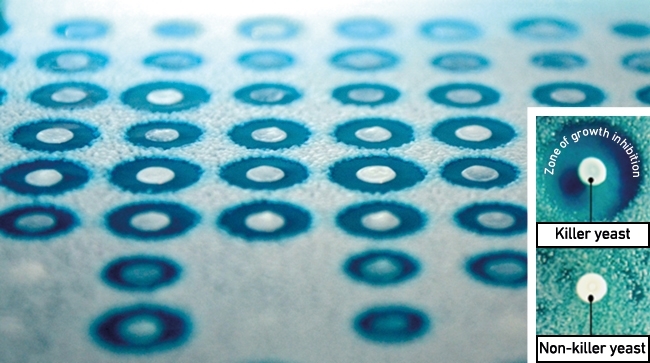 Mycoviruses as an antifungal biocontrol

The broader application of mycovirus-based management of pathogenic fungi is worthy of further research, as there are many examples of mycovirus-dependent hypovirulence in pathogenic fungi of commercial fruits, tubers and cereals. However, mycovirus infection can result in fungal hypervirulence (more able to cause disease), and so a comprehensive understanding of host–virus interactions would avoid potential undesirable outcomes of therapeutic mycovirus infection and increase the utility of current therapies.

There are about 100,000 known fungal species (with an estimated 0.8–5.1 million species in total), but only about 250 mycoviruses have been so far discovered. With the current renewed focus on the development of novel antimicrobial compounds, the untapped diversity of mycoviruses could potentially improve our understanding of the evolution, mechanism and utility of mycovirus-based strategies focused against pathogenic fungi.