HIV and HCV co-infection – does it matter in the era of direct-acting antiviral therapies? 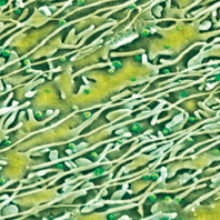 Transmission of the human immunodeficiency virus (HIV) and hepatitis C virus (HCV) occurs within similar populations and therefore dual infection with both viruses is common, affecting more than two million people around the world.

Half of such infections occur in HIV-infected people who inject drugs (PWID), in whom the global HCV seroprevalence is as high as 82%. Iatrogenic infection via infected blood products or medical instruments also occurs frequently in low-income countries (LICs). A notorious example of nosocomial transmission of HIV and HCV affected 418 children admitted to the Al-Fateh Hospital in Benghazi, Libya, in 1998. Foreign healthcare workers were initially blamed for these infections (and threatened with the death penalty) but the onset of the outbreak clearly predated their arrival in the hospital, where transmission had been occurring for many years due to poor medical practices.

Does dual infection with HIV and HCV impact on outcome in infected individuals?

Dual HIV/HCV infection is important because HIV-infected individuals are less likely to clear HCV spontaneously and once chronically infected are at higher risk of progression to cirrhosis and primary hepatocellular carcinoma (HCC). Encouragingly, despite wide differences in sustained virological response (SVR) rates to interferon-based treatments, management of HCV infection using direct-acting antiviral therapies (DAAs) is as efficacious in HIV-positive as HIV-negative individuals, leading some to suggest that HIV-infected patients no longer need to be prioritised as a separate ‘hard-to-treat’ group. However, liver disease, including HCV-related liver disease, remains a leading cause of mortality and morbidity in HIV-infected people and while co-infected patients with optimally managed HIV are less likely to progress rapidly than those who are not maintained on antiretrovirals (ARVs), they are still at greater risk of complication than HCV mono-infected individuals. HIV-infected patients develop HCC at an earlier stage of cirrhosis and at a younger age, and are more likely to develop multi-focal disease. Markers of bacterial translocation, a feature of both HIV and HCV mono-infection, are markedly increased in dual infection. Management of liver transplantation in HIV-infected patients, while feasible, is more challenging due to drug–drug interactions and the risk of infective complications.

Why do co-infected individuals progress more rapidly to liver cirrhosis and cancer?

The mechanism of accelerated progression to cirrhosis and to HCC in HIV/HCV co-infection relates at least in part to the role of the adaptive immune response in control of HCV infection, in particular, the central role of the CD4+ T cell (Fig. 1). The innate immune response to HCV is also altered via direct interactions with both viruses and depletion of innate lymphocyte subsets.

Fig. 1. Mechanisms leading to fibrosis in HCV- and HIV-infected cells. 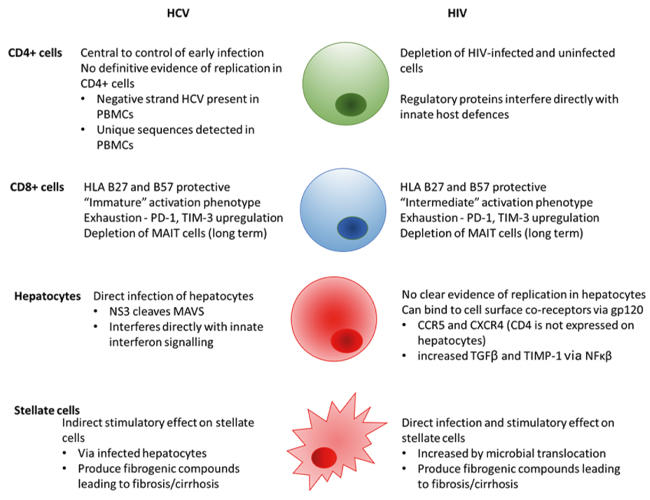 CD4 and CD8 T helper and T cytotoxic cells are critical in the control of HCV infection in infected individuals. In chimpanzees, depletion of either CD4 or CD8 cell subsets is associated with progression to chronicity, and in humans, class I and class II HLA associations with spontaneous clearance highlight the role of antigen presentation to T cells. Curiously, the class I HLA B27 and B57 alleles are protective in both infections, likely via presentation of structurally unrelated antigens. Depletion and loss of function of CD4 cells as a consequence of HIV infection impacts the HCV response both directly and indirectly. In HIV-infected individuals, HCV viral loads are higher than in mono-infected individuals and have been shown to correlate directly with CD4 count. CD4 cells classically maintain CD8 cytotoxic responses; these are impaired in both infections, in HCV infection at a more immature stage of development than HIV. As well as providing help to CD8+ cells, CD4 responses have been shown more recently to exert direct cytolytic effects on infected cells and are also key in the control of bacterial translocation from the gastrointestinal tract, a site where massive depletion of CD4 cells occurs early on in HIV infection. Upregulation of T cell exhaustion markers such as PD-1 and TIM-3 is associated with both HIV and HCV infection and may be increased in dual infection, resulting in a less effective adaptive response to HCV.

Mucosal-associated invariant T (MAIT) cells, characterised by the semi-invariant T cell receptor (TCR) Va7.2-Ja33, recognise vitamin B metabolites from bacterial and fungal pathogens presented via the major histocompatibility complex class I-related molecule, MR1. They express the transcription factors RORγt and PLZF, secrete IL17 and IL22, express CD161 and are highly enriched in the liver where they represent as much as 50% of the lymphocyte population. They may be activated via the TCR or in a non-TCR dependent manner by cytokines. Activation in response to HCV occurs via an IL18-dependent, TCR-independent cytokine pathway.

Importantly, MAIT cells are depleted in HCV infection in peripheral blood and the liver and are associated inversely with lower fibrosis and inflammation scores. Partial restoration of MAIT cell numbers and a decrease in activation occurs during effective antiviral DAA therapy but the response to cognate antigen remains impaired functionally and absolute numbers do not reach the level seen in uninfected controls. In patients infected with HIV, the MAIT cell population is dramatically decreased and this is not replaced following successful ARV therapy. It is very likely therefore that a lack of MAIT cells in the liver may contribute to accelerated fibrosis in co-infected individuals.

Direct effects of HIV and HCV on hepatocytes and stellate cells

Hepatocytes do not support the entry of HIV (due to lack of the CD4+ receptor) but binding of the virus to the CXCR4 and CCR5 co-receptors which are present on hepatocytes may occur via gp120, resulting in an increase in intracellular signalling via NFκβ and an increase in expression of TGF-β1. This may result in accelerated fibrosis and increased replication of HCV within infected hepatocytes in the absence of hepatocyte entry. Expression of profibrotic proteins such as tissue inhibitor of metalloproteinase 1 (TIMP-1) is also increased by NFκβ and may contribute to accelerated fibrosis.

Other cell types such as monocytes or B cells could in theory harbour both viruses, although this has not been shown conclusively either in vitro or in vivo. Within the same cell, multiple interactions between viral proteins that regulate the innate immune response to HIV and HCV could theoretically impact on HCV replication also, but such interactions have not yet been described.

In summary, HIV and HCV co-infection is common and is associated with a higher risk of progression to fibrosis and cancer, an effect only partly attenuated by antiretroviral therapy for HIV. This is likely to be related to immune perturbation of innate and adaptive immune responses in infected individuals. There is a rationale for early treatment of HCV in HIV-infected patients, even in the era of highly effective DAA therapies.

Emma Thomson studied medicine in Glasgow before specialising in infectious diseases and general medicine in London. She carried out a PhD in viral immunology (hepatitis C) at Imperial College London and Oxford University and now runs a research lab at the MRC-University of Glasgow Centre for Virus Research.

I was inspired by reading the Origin of Species and later other books by Charles Darwin (amazed that he was able to draw the first phylogenetic tree without even knowing about the existence of DNA) and The Selfish Gene by Richard Dawkins. I became fascinated by the host–pathogen arms race as an undergraduate. I also wanted to learn a multi-system speciality and was inspired by senior colleagues that aimed to challenge health inequalities. This led me into infectious diseases as a speciality and later into research.

What do you see as your greatest achievement to date?

I had the opportunity to draft the first treatment guidelines for hepatitis C for the World Health Organization in 2014 – it was exciting to be able to contribute in a small way to the plan to eliminate the virus by 2030. I was also really excited when my lab team were able to sequence whole HCV genomes (and other viruses) for the first time using next-generation sequencing.