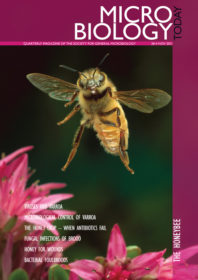 Insect pollinators such as bees – and honeybees in particular – are critical for the pollination of at least 65% of all food crops. But the honeybee population is in decline thanks to a range of pests and pathogens, including viruses, fungi and bacteria. Our understanding of the mechanisms of action of honeybee pathogens is vital if we are to find ways of tackling them to reverse this decline. But the relationship between honeybees and microbes isn’t all negative. The bacterial flora of the honey stomach and honey itself may contain substances that we can use to fight against microbial pathogens that affect the human population, and an insect-pathogenic fungus could provide part of the solution to control the dreaded varroa mite, a vector of many viral diseases in honeybees. This issue also sees the launch of a new section. The ‘Media’ section will feature microbiology in the news, the work of the SGM press office and that of partner organizations we collaborate with to represent microbiology accurately through the media. The section will also include information on new podcasts, videos and blogs from SGM and our members.

Readers will be familiar with media reports about the varroa mite and the toll it is taking on honeybee colonies around the world. But how does this mite inflict damage on the colony, and what do we know about the interactions between the varroa mite and honeybee viruses? These questions are answered by Eugene Ryabov and David Evans.

Biological control of varroa with entomopathogenic fungi: a sustainable solution for a globally important pest? (p. 222)

The threat that the varroa mite poses to honeybees, and the subsequent economic and environmental consequences, cannot be underestimated. But with the development of resistance to chemical varroacides and the limited effectiveness of other treatments, David Chandler, Gill Prince and Judith Pell discuss how we can control this major pest in future using microbiological control.

All of the work in this area started when Tobias Olofsson asked his grandfather Tage Kimblad, a beekeeper for 80 years, to participate in a research project. As a researcher in microbiology, Tobias became interested in investigating why honey has been regarded as a therapeutic agent by many different cultures independently throughout history, from the Maya in Mexico to the Pharaohs in Egypt. Together with his colleague Alejandra Vásquez, he discovered a large battery of beneficial bacteria inside the honey crop, a discovery that has opened up a new research field.

Honeybees, the most important pollinators on the planet, are just like other living creatures; they are vulnerable to microbial attack and sometimes fall victim to a variety of viruses, bacteria and fungi. As Annette Bruun Jensen and José Manuel Flores describe, one of the commonest fungal infections is chalkbrood.

Honey for wounds: an ancient remedy for a modern problem (p. 234)

Rose Cooper asks should the medical profession embrace honey as an alternative antimicrobial agent? Its therapeutic effects have been known for centuries and now modern scientific study has demonstrated just how potent it can be against a range of micro-organisms.

Every beekeeper dreads opening up their hives to be greeted by the symptoms of American or European foulbrood. What causes these diseases, how are they spread and what can be done to control them? Eva Forsgren and Elke Genersch explain.

Beekeepers are continually bombarded with confusing messages on how they should manage varroa. Ian Atherton suggests it’s time for local, governmental and international organizations to co-ordinate a properly thought out and subsidized integrated pest management regime.

Important as they are, honeybees are by no means the only type of bee on which we depend. But who provides a voice for the thousands of other social and solitary bee species? Adam Hart introduces the Bee Guardian Foundation.

This is the first edition of Microshorts written by SGM members, once again highlighting recent microbiology stories.

I’m a Scientist, Get me out of here! is an award-winning online event where students get to meet, talk to and, most importantly, question scientists about their research, their jobs and their lives. SGM Education and Outreach Officer Vicki Symington presents a teacher’s view of the event.

In this issue of Gradline Stacey Munro and Karen McGregor present two scientists’ views of the I’m a Scientist, Get me out of here! event described in Schoolzone. In addition, Stacey and Karen highlight the SGM Vacation Studentship scheme

In this new section, Laura Udakis looks at how SGM has teamed up with the Science Media Centre (SMC) this year to make sure journalists have all the facts before the flu season kicks off. Jonathan Webb, SMC Press Officer, describes the work of SMC, and finally Laura reports on how microbiology leapt into the public eye once more this autumn, courtesy of the SGM Conference in York.

How has SGM been helping to spread the word about ‘dirt’ this summer?

As part of the problem and part of the solution, microbes will play a major role in sustainable food security as Ian Crute describes.