Can the Mesolens help the microbiologist? 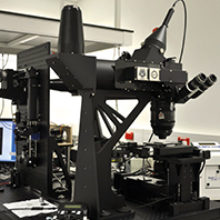 The founders of microbiology, Pasteur and Koch, depended heavily on the optical microscope. Their key work in 1868–1882 coincided with the commercial availability of newly-invented immersion objectives.

Abbe realised that the ability of a lens to resolve fine detail was proportional to a quantity which he called ‘numerical aperture’ (NA) The NA = n sin θ, where n is the refractive index of the fluid (ideally 1.5, which can be achieved if oil is used to fill the space between lens and specimen) and θ is the angle to the optical axis of the extreme ray, i.e. one that is at such a high angle that it is only just captured by the lens. Abbe’s NA is still the main figure of merit in choosing objectives for studying microbes but, even at the highest NA no detail can be seen within the cells of most bacteria. The objective lens forms an image, and the amount of detail in this image is proportional to the NA and inversely proportional to the magnification. If the magnification were too high, the image of a single bacterium might fill the entire field with a smoothly-blurred pattern with little detail.

For more than 100 years, the ratio of magnification to NA has been held at approximately 40:1 for all microscope objectives. This gives an image in which the detail is well-fitted to the human eye. Objectives of low power are designed to have a proportionally low NA, which makes them easy to design and cheap to manufacture. A typical microbiology microscope has an objective of ×100, NA 1.4 for looking at bacteria and a low-power objective, ×4 NA 0.1, for searching for an appropriate area on the slide for study.

With the introduction of 3D microscopes, such as the confocal laser-scanning microscope in the mid-1980s, this rule-of-thumb for designing microscopes was revealed as inadequate, in that the ×4 NA 0.1 lens had very poor discrimination of depth, smearing all detail in depth over a 30–60 µm along the instrument axis (usually referred to as the Z axis), so no useful confocal optical sectioning could occur.

This has led to the abandonment of confocal microscopy for large specimens such as thick brain slices of rodent brain and the introduction of a thin, planar sheet of light to selectively illuminate a narrow section of the specimen, so that 3D information can be obtained from one level only within the large depth of field of the low-magnification lenses. Unfortunately, large specimens are still difficult to image because a basic optical limit (diffraction) prevents the formation of a thin enough sheet over a width of more than a millimetre or two in the XY plane. Also, cameras are now commonly available with an acuity exceeding that of the human eye, so there is now an incentive to improve the low-magnification objectives by increasing the NA. This cannot be done, for fundamental reasons, to the high-NA lenses, which are at a limit set by the nature of the lens materials and those surrounding the specimen. 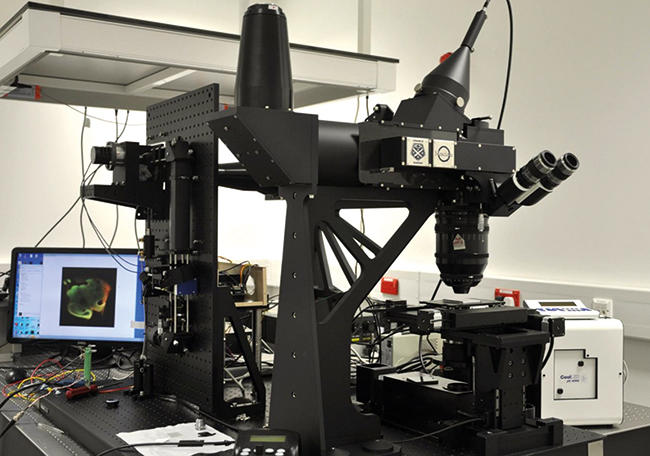 A new type of lens

We and our colleagues have developed a new type of giant lens, the Mesolens, in which the magic ratio is 8:1 rather than 40:1, which is unprecedented for a fully colour-corrected microscope objective. The lens is too large to fit on a standard microscope, so the entire microscope is built around it and the whole setup occupies approximately one cubic metre (Fig. 1). The performance of this lens is such that one can resolve individual bacteria (resolution <1 µm) throughout a volume of more than 100 mm3. The name Mesolens (a registered trademark of Mesolens Ltd) is chosen to signify that the lens is intermediate in properties between a microscope objective and a macroscopic camera lens, having the high resolution of the first and the wide field of the second.

An example of the wide field but detailed image in the Mesolens is demonstrated in Fig. 2, which shows a wide-field epi-fluorescence Mesolens image of a Streptomyces coelicolor (M145) mycelium. Nascent peptidoglycan is stained with FITC-wheat germ agglutinin (green) and nucleoids are stained with propidium iodide (magenta). The insert, achieved by software zooming, shows a magnified region of interest from the Mesolens image, where individual hyphae are clearly resolved and sub-cellular detail can be observed. This level of detail is present across the whole 6 mm diameter field of the Mesolens.

We originally specified and designed the Mesolens for imaging 9–12 day-old rodent embryos, but we expect it to have much broader applications in biomedicine and materials analysis.

Fig. 2. Mesolens image of a Streptomyces coelicolor (M145) mycelium obtained using a high-resolution camera (Vieworks VNP-29MC, giving an effective pixel number of 250 megapixels in each image). Nascent peptidoglycan is stained with FITC-wheat germ agglutinin (green) and nucleoids are stained with a propidium iodide (magenta). Fluorescence excitation was performed using high-brightness light-emitting diodes (CoolLED pE-4000). The insert, achieved by software zooming, shows a magnified region of interest from the Mesolens image, where individual hyphae are clearly resolved and sub-cellular detail can be observed. This level of detail is present across the whole 6 mm diameter field of the Mesolens. Bar, 1 mm. 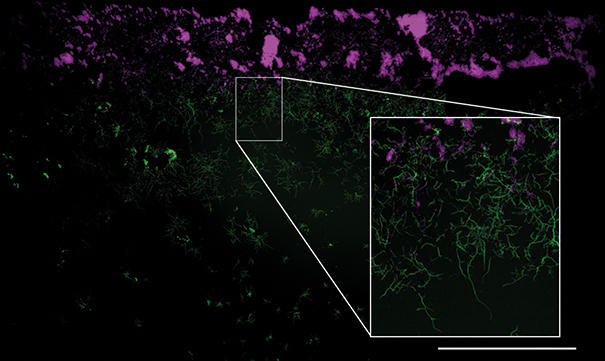 How useful can the huge volume of capture be in microbiology? A single imaged plane comprises of voxels measuring approximately 0.5 × 0.5 by 6 µm for a complete single-channel image (e.g. single fluorescent stain), and a 3D volume imaged at full resolution contains up to 1,000 imaged planes. At first sight it seems that this is so much larger than a single microbe that it can be useful only with multicellular organisms. We believe that it has several potential areas of use:

McConnell G. & others (2016). A novel optical microscope for imaging large embryos and tissue volumes with sub-cellular resolution throughout. eLife 5 e18659.

Gail McConnell is Professor of Biophotonics at the Department of Physics, University of Strathclyde, UK. Her research focuses on the design of new types of optical imaging instrumentation and methods and their application in cell biology.

Brad Amos is a Visiting Professor at the University of Strathclyde, where he collaborates with Gail McConnell’s research group. After a long career in cell motility research and confocal microscope development, he and Esmond Reid founded Mesolens Ltd in 2009 to design and manufacture the imaging system described here.

Liam Rooney is in the second year of his PhD at the Strathclyde Institute of Pharmacy and Biomedical Sciences. His research involves using the Mesolens to study biofilm formation and dynamics, as well as using interference microscopy techniques to shed light on bacterial gliding motility.

Gail: I enjoy the luxury of freedom to work on areas of science that interest me and to have the opportunity to work with others who share my interests. It is very rewarding to build an optical imaging system that can show something that has before been unseen, and share this delight with others, particularly if it helps them to solve problems in their own research. It is also very enjoyable to teach students how to set up and use microscopes and witness their first view of the microscopic world!

Gail: Don’t be afraid to learn new things, especially outside of your own immediate field. I trained as an optical physicist but learning some cell biology and wet chemistry has transformed my research, and has opened up new and exciting collaborative research opportunities.