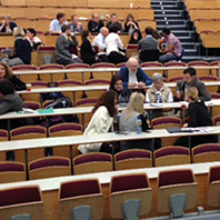 Tackling antimicrobial resistance requires a coordinated ‘One Health’ approach involving human and animal health and environmental stakeholders. Participants at the Society’s Focused Meeting on Antimicrobial Resistance and One Health discussed how to better inform One Health policy with science.

It is important that AMR initiatives and policies are informed by scientific evidence. Research grant applications usually require scientists to consider the potential wider impact of their research, stakeholder engagement, and measurable deliverables. However, scientists and policy-makers often speak a different language and work to different timescales and priorities, which can make it difficult for both groups to communicate effectively with one another. Last year, at the Microbiology Society’s Focused Meeting on Antimicrobial Resistance and One Health at Maynooth University in Ireland, a workshop involving researchers and representatives from funders and government agencies explored barriers and opportunities for translating research into One Health policy. Effective One Health AMR policy requires excellent scientific evidence and surveillance data across humans, animals and the environment. Research on these different components must be equally valued by policy-makers, and be supported with the necessary funding and infrastructure.

Workshop participants called for more international, multidisciplinary funding to support One Health AMR research. They also felt there was often a lack of coordination between research funders to link all three elements of One Health, although there have some positive examples of One Health funding calls, including under the European Joint Programming Initiative on AMR (JPIAMR).

However, when available data on AMR in a country is limited, for example, to just surveillance in humans, it is very difficult for research to promote and inform effective One Health policies. One example is the European Antimicrobial Resistance Surveillance Network (EARS-Net) surveillance data for resistance in hospital-acquired infections. On these maps it is possible to identify countries with specific problems such as carbapenem-resistant Enterobacteriaceae, but it is not possible to identify if these resistant bacteria are present in livestock infections and in the environment via animal waste.

Participants also identified the need for experts across all sectors to better collaborate to agree common methods and standards for monitoring AMR in humans, animals and environments. Recent AMR action plans, including those published by Ireland and the European Commission, set out tackling AMR with a One Health approach. Hopefully, additional funding and coordination will improve surveillance data across all One Health areas, informing better agricultural and environmental policies to address the emergence and transmission of AMR in the food chain, and improved public health policies to minimise the transfer of novel AMR mechanisms into human pathogens.

Participants also felt that the One Health focus of the conference at Maynooth University provided a unique opportunity for knowledge exchange between different sectors and stakeholders and a further need for such multidisciplinary meetings. They identified that different sectors and stakeholders need to better collaborate to develop shared priorities, methods and standards, for example, in how they monitor antibiotic use and conduct surveillance of AMR. We can all understand the commonality of AMR in each sector and learn from each other. Participants discussed common challenges for public health and agriculture, including working with the public and farmers to reduce usage of antibiotics, and the need to develop alternative therapeutics to antibiotics.

Supporting researchers to communicate their science

In addition to securing research funding, and conducting and publishing research, scientists are expected to effectively communicate their research to a wide range of stakeholders, from the public to policy-makers. Participants identified that professional bodies, learned societies and other intermediary groups have an important role to play bringing together the AMR research community’s expertise to highlight funding and capacity needs to governments, and supporting scientists to effectively communicate and translate their research into policy. It is also important to appropriately communicate the risk posed by AMR for health and food security and safety, and the scientific evidence behind this to the public, raise awareness, to inform behaviour change and promote government and industry to take action.

Engage through the Microbiology Society

The Microbiology Society enables members to engage with and inform policy-makers about AMR and other microbiological issues. For example, responding to policy consultations, producing policy briefings and collaborating with the Learned Society Partnership on AMR (LeSPAR). We are always keen to hear from members working on AMR who want to inform policy to maximise the impact of microbiology.

We would like to thank the participants of the policy workshop at the AMR and One Health Focused Meeting.