Climate change: microbes to the rescue? 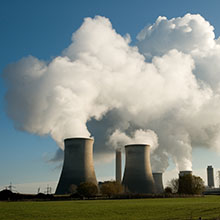 Since the industrial revolution, human activity and the ongoing burning of fossil fuels has drastically increased the concentrations of greenhouse gases. As an example, carbon dioxide (CO2) concentrations, which ranged from 180 to 280 parts per million (ppm) for most of the last hundreds of thousands of years, increased to 400 ppm in the period between 1970 and 2010 and are predicted to rise to up to 700 ppm by the end of the century. Such an increase is leading to an unprecedented climate crisis of global proportions, which includes global warming, sea-level rise, extreme storms and flooding, droughts, wildfires and desertification. The discussion on climate change has been mostly centred on its effect on human populations, particularly on how rising seas might affect urban coastal areas and how warmer weather might affect the sustainability of food production. Some of the discussion has also focused on wider ecological impacts and large-scale ecosystem disruption resulting from the change in oceanic currents or ocean acidification. Microbes form the basis of all life on Earth, yet very little thought has been given to the interactions between microbes and such a global-scale event.

The global impact of microbes

Unknown for a long period of time, the global impact of microbes is now widely recognised. Microbes are the dominant life forms on our planet by far; they also control and condition global-scale geochemical cycles (namely of carbon, nitrogen and sulfur), which are essential to all life on Earth.

The reach and impact of microbes extends from the oceans and continents up to the air that surrounds us. Despite the fact that the atmosphere constitutes the largest fraction of the biosphere, studies on atmospheric microbial diversity and distribution remain surprisingly sparse. The dispersion of microbes through the atmosphere is very relevant from both an epidemiological and an ecological perspective. Furthermore, atmospheric microbes also seem to play a role in climate patterns and change, most notably in bio-precipitation. Bacteria such as Pseudomonas syringae have been shown to act as nucleating centres that are directly implicated in the formation of rain, hail or snow. The exact dynamics of this interaction between airborne microbes and aerosols, clouds and precipitation is slowly being unveiled and promises to provide important new insights into climate, the global impact of microbes and a new range of potential applications. There is still a lot to investigate in this field.

Microbes to the rescue?

Curbing CO2 emissions is seen as the preferred way of limiting climate change. This relies on the development and adoption of new technologies, use of alternative fuels and wider modification of cultural habits. Given that this is a slow-paced approach, it might not be quick enough to avoid climate catastrophe. Several authors thus propose to replace or complement it with mechanisms to capture CO2 as an alternative way of controlling its levels in the atmosphere.

Within capture approaches, geological sequestration is the leading technology and is seen as the most useful for quickly storing large volumes of CO2 by pumping it into the subsoil or under the ocean. However, conventional methods for CO2 capture or sequestration are frequently inefficient, expensive and hazardous and lead to secondary pollution. The use of microbially mediated processes is seen as a suitable alternative and has been gaining increased traction.

Many microbes are able to fix CO2 and convert it into higher-value bioproducts, such as biofuels. There are even some interesting test-pilot studies looking into setting up microbial carbon capture cells combining CO2 capture with biofuel and energy production. On a parallel path, several microbes capture CO2 by accelerating the carbonation process, which converts carbon dioxide into calcium carbonate, usually via a combination of the enzymes carbon anhydrase and urease. This process provides a comparatively clean and more sustainable source of calcium carbonate (CaCO3), when compared with synthetic production, and has been receiving considerable attention given its widening range of applications (which also include civil engineering, art restoration, soil improvement and bioremediation). Such microbially induced calcite production is a relatively common phenomenon but remains poorly understood. It has been reported in a variety of species but, so far, most studies and applications have relied on the use of a handful of species of the genus Bacillus, Sporosarcina and other closely related genera.

The capture of CO2 with sequestration in the form of carbonate biominerals might prove particularly insightful and useful. Biogenic carbonates are increasingly used for producing bio-concrete and could eventually lead to the reduction of regular concrete production. It is worth highlighting that, after water, concrete is the most used material in the world and its production is very energetically costly, making it one of the largest CO2 emission sources.

While climate change is most frequently perceived and discussed as an outcome of the increase in CO2 levels in the atmosphere (due to its high abundance), CO2 is not the only relevant greenhouse gas. Methane, nitrous oxide and some halocarbon gases are also on the top of our concerns given their rising concentrations, global warming potential and atmospheric lifetime. Despite their lower concentrations in the atmosphere, these gases lead to a much more pronounced greenhouse effect than CO2, ranging from 25 times higher values for methane (CH4) to up to more than 10,000 times higher for some halocarbon gases.

Methane is a particularly destructive greenhouse gas, as it is expected to naturally increase with the rise of temperatures (a process known as positive climate feedback). Anthropogenic methane emissions are heavily linked to agriculture, more specifically with livestock. Ruminants are massive producers of methane as part of their regular digestive process: each ruminant produces an average of 250–500 litres of CH4 per day! Our understanding of microbial metabolism and physiology allows us to devise strategies that help us to control this issue, namely by the use of probiotics and food supplements that lead to changes in the gut microbiome of ruminants and reduce methanogenesis.

Likewise, hopes to use microbes to mitigate nitrous oxide (N2O) levels have been boosted by the ongoing discovery of novel groups of bacteria and archaea capable of reducing this compound into harmless nitrogen (N2). There are also some interesting results on microbial degradation of halocarbon gases, although their industrial production and emission are now severely restricted.

Despite being in its infancy, such a potential global-scale use of microbially assisted planetary engineering to tamper with our atmosphere and climate could have a much wider reach. Several authors defend that future colonisation efforts on Mars will require some sort of terraforming, which will most likely rely on the use of microbes. Such global engineering would aim to make the surface and climate of Mars more Earth-like and hospitable to humans.

It is worth noting that this topic raises some additional concerns both from a planetary protection perspective and from an ethical one. If life does exist on Mars, any type of human interference could lead to environmental catastrophe and collapse entire alien ecosystems. Even if there is no life on Mars, many defend that there should be an obligation to preserve its environmental conditions as much as possible.

Microbiology might well provide us with a sustainable solution to solve our current climate crisis, although caution is recommended. We need to increase our understanding of how microbes might be affected by climate change, anchored on community-level studies and mapping of biotic and abiotic interactions. Furthermore, there is an urgent need for more efforts focusing on microbial-based mitigation, with integration of bioprospection, new species discovery and characterisation, as well as the use of genomic-based exploration together with the potential use of genetic and metabolic engineering for improved results.

André Antunes is an Associate Professor and team leader of astrobiology at China’s State Key Laboratory of Lunar and Planetary Sciences at Macau University of Science and Technology (MUST). He is an expert in microbiology of extreme environments, having specialised in deep-sea and high-salinity locations.

I love how microbes are connected with everything! Part of my current research focuses on the most exciting cross-disciplinary fields of microbiology: astrobiology and geomicrobiology. Both of them bridge the divide between very different fields of science, requiring me to be constantly engaged with researchers who have very different approaches and perspectives. This can be quite challenging, but I keep learning completely new things daily!

What’s the best career decision you’ve ever made?

Rather than a single career decision, I would say that being open to new opportunities and avoiding getting too attached to my comfort zone were probably the most influential career options that I have made. I have moved frequently across the globe and had my ups and downs, like everybody else. Looking back on things, I think that all decisions that I made were eventually important in leading me to where I am today.