Impact of climate change on fungi 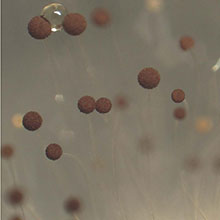 Earth’s climate has gone through different changes and it is now unquestionable that it is warming at an increasing rate. These adverse changes, greatly due to human activities, have seen an increase after the industrial revolution and have been happening for several reasons, such as increasing concentrations of greenhouse gases (water vapour, carbon dioxide, methane and nitrous oxide) and of particulate matter in the atmosphere. Over the last few decades, we’ve been witnessing the warming of the atmosphere and the ocean, the decrease of snow and ice, droughts, and the rise of sea levels and changes in its temperature, salinity and nutrient availability. All of these factors generate a domino effect, impacting all living beings and systems. Even though policy-makers are now aware of the current evolution and thoughtful actions have been designed to reduce negative effects, more efforts are needed to better understand and circumvent all negative outcomes.

Fungi are eukaryotic organisms ubiquitous on Earth. They can convert organic matter into carbon dioxide and small molecules – as decomposers; they can colonise plants, solubilising and delivering phosphorous, nitrogen, micronutrients and water – mycorrhizal; and they can cause disease in other beings – pathogens. Fungi are affected both directly and through the effects of organisms they are associated with. Since fungi play fundamental roles in nutrient cycling and exchange, and regulate key ecosystem processes, it is essential to understand how they are affected by such a large-scale event.

The effect of climate changes on fungi will, directly and indirectly, affect many areas. Here are some examples:

Agriculture. Around 90% of terrestrial plants benefit from being associated with mycorrhizal fungi. Plant-associated fungi play key roles in the plants’ development, growth and health, and help them retrieve nitrogen from the soil. Chemical composition, pH, water content and organic matter are just some of the abiotic factors that characterise soils. These, called edaphic factors, are influenced by climate and influence several organisms such as fungal communities, causing biodiversity changes. Furthermore, abiotic stressors (e.g. increased temperature, salinity or carbon dioxide concentrations and changes in water availability), which increase with climate change, disrupt mycorrhizal associations and can, in turn, influence vital agricultural aspects like irrigation requirements, crop rotations, optimal crop timing and the propensity for crop contamination with fungal phytopathogens.

Current estimations point to a coupling of increase in global temperatures with a future increase in the relative and total abundance of soil-borne potential fungal phytopathogens from the genera Alternaria, Fusarium, Venturia and Phoma. When exposed to high carbon dioxide concentrations and high temperatures, Fusarium verticillioides – a phytopathogen of maize – becomes more resilient and suffers changes in its gene expression and phenotype for the production of toxic secondary metabolites, leading to an increased ability to cause infection. Indeed, contamination with mycotoxins (low-molecular-weight and toxic secondary metabolites) impacts the geographical distribution of many essential crops (e.g. cereals). As an example, studies have shown that maize crops in Kenya will be largely affected in the coming decades with increasing contamination of aflatoxins, a group of carcinogenic mycotoxins. Many phytopathogens can ruin crops and lead to major economic losses. Therefore, agriculture-based economies will also have to change and adapt to survive.

Aflatoxins are commonly produced by Aspergillus spp. and are usually found in milk, eggs, cheese, cereals and nuts. Changes in climate can lead to acute aflatoxicosis and deaths from the consumption of contaminated food crops. Ochratoxin A (OTA), another foodborne mycotoxin, affects cereals, dry beans, peanuts, cheese, coffee, cocoa, dried fruits, grapes and wine. Climate change has been reported to increase fungal colonisation in grapes, which consequently increases the contamination of OTA in both grapes and derived products. OTA is nephrotoxic, with health risks for humans and other animals.

Biodiversity and ecology. Mycorrhizal fungi can also shield plants against extinction, facilitating or retarding the dispersal of plants from unsuitable environments, alleviating the effects of abiotic stressors or enabling these plants to adapt to new climates. Endangered plants might have their own specific mycorrhizal community, and selected fungal inocula could help promote their growth. Plus, with changes in ecological niches, fungal biodiversity will change, as well as its influence on its surroundings.

The mycorrhizal black truffle, Tuber melanosporum, is usually found in regions with a Mediterranean climate. It grows underground, in soils with high limestone content, in a symbiotic relationship with tree roots. While it can develop naturally, a large industry is dependent on its cultivation in chalky soils. However, this Mediterranean habitat has been affected by drought for some time, reducing truffle yields. Therefore, in a trial to find alternative habitats, more suitable than its native one, it was found that T. melanosporum grows well in the northern maritime climate of the British Isles, the farthest north that the species has ever been found. In some cases, when facing harsh droughts, some fungi, such as lichen-forming fungi, black fungi and yeasts have been found to survive on the surface of rocks, especially in drylands. These stable endolithic habitats offer some protection against temperature and radiation (ultraviolet and solar) and some degree of water retention. These fungi can colonise several different types of rock in both hot and cold areas. This attests to their impressive capability to adapt to extreme conditions.

Health. Overall, we have been observing more emerging fungal pathogens related to climate change, and this tendency is expected to continue.

For example, after the 1970s there was a rise in the rate of infection caused by Talaromyces marneffei (previously called Penicillium marneffei) that occurs mainly in immunocompromised hosts. This is a thermally dimorphic fungus, able to grow as filamentous fungi or unicellular yeast-like fungi depending on the habitat’s temperature, is endemic to Southeast Asia and China, and not found in temperate regions. It is considered an emerging pathogen.

Aspergillus flavus, another important pathogen of maize, when exposed to high carbon dioxide concentrations and high temperatures, produces higher amounts of the carcinogenic mycotoxin aflatoxin B1, with an increased risk for human and animal health. In this case, the genes involved in the aflatoxin biosynthesis get activated earlier in the fungal life cycle; because this species is highly resilient to all climate stressors, it has its life cycle altered (higher lag times) when exposed to those stressors. This leads to a higher accumulation of aflatoxin.

Candida auris, a drug-resistant yeast first isolated in 2009 from a human ear, has also been emerging as a cause of disease in many different countries. The widespread use of antifungal drugs tends to contribute to the development of resistant species, but in this case, the resistance and virulence of this species seem to be associated with the adaptation to new climate conditions, and therefore its pathogenicity is directly linked with climate change.

How are fungi affected?

Fungi are very resourceful organisms, and abiotic stressors generated by the climate push them to develop and create their own ways of surviving the new realities. Adaptations have been reported on many levels: genetic, life cycle and sporulation, behavioural and metabolic. In addition to the adaptations described in the sections above, other alterations reported are thickening of walls of spores, allowing a higher resistance to temperature and water changes; melanisation, improving resistance to desiccation; formation of rhizomorphs, structures that allow for an easier way of transporting nutrients and water; appearance of jelly fungi, fungi with a gelatinous texture that allows them to survive periods of dry weather; and formation of sclerotia and other dormant structures, under which fungi can stay for long periods or until suitable conditions are met.

Furthermore, climate changes can alter the structure of fungal communities and may favour fungi over other organisms. One of the reasons for this is the acidification of soils that tends to inhibit certain micro-organisms and favour fungal growth up to certain pH values. This could then have a dramatic effect on the emission and sequestration of carbon dioxide and lead to positive feedback that translates into an acceleration in climate change.

Many predictions have already been made and many studies have been developed to better understand the consequences of climate change; however, there are still many knowledge gaps. We need more studies and research in order to better plan our future actions and adapt to the changes we cannot prevent or avoid. Understanding fungal mechanisms that allow extreme-tolerant and extremophile fungi to thrive and be metabolically active in harsh environments might help us to put in place adaptation measures and better plan our actions on Earth.

Marta Filipa Simões is a postdoctoral fellow of astrobiology. Her research is focused on fungal ecology and biodiversity in environmental analogues to outer-space conditions, bioprospection and application of filamentous fungi, and fungal growth containment and exploitation to our needs in conditions similar to outer-space.

On a typical day in this position, what do you do?

There is no typical day at my work. Most of the time, I start by checking my emails and agenda. Then, from there until the end of the day, many things can happen: lab work, fieldwork and sampling in exotic and extreme locations, meetings, writing, reading and preparing presentations. I usually finish my day by preparing a short to-do list for the next day.

Everything that offers me moments of awe, the huge diversity and amazing morphologies of fungal species. The novelty of all the discoveries I make in science (from my work and other researchers’ work), the people I meet, places I get to visit and explore, and the different cultures and perspectives.