Lyme disease in the UK: the continued rise of an emerging zoonotic infection 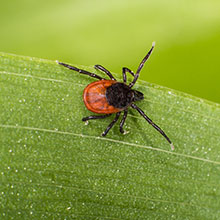 Lyme disease or Lyme borreliosis is a vector-borne zoonotic infection transmitted to humans by the bite of an infected tick. Ticks from the genus Ixodes act as the vector, and the disease is caused by the bacterium Borrelia burgdorferi. It is now the most common tick-borne disease in the northern hemisphere. In the UK, the recorded incidence has been steadily increasing since the first confirmed case was reported in 1986. This reflects a genuine increase, although greater awareness and increased testing are relevant. The reasons for this continued emergence are complex, possibly including climate change, changes in land management and biodiversity, and human interaction with nature.

It is important to understand key contextual factors in order to consider possible drivers. These include the unique nature of the bacterium; the central role of the tick vector; and the complex and intricate dynamics involved in the ecology of Borrelia and ticks, and their animal hosts.

In the UK, epidemiological data refers only to laboratory-confirmed cases, which underestimates the true incidence. In England and Wales, there were 2.7 recorded cases per 100,000 population in 2017 (1,579 cases), with an estimated 2,000–3,000 likely additional cases. Whilst Lyme disease is not common in the UK it is no longer rare, with incidence rates highest in Scotland and southern counties of England. Lyme disease is more common in mainland Europe, particularly Central/Eastern Europe, and the north-eastern USA. Across Europe, data collection methods and surveillance criteria vary, so direct comparisons are difficult. A 2014 review of Western European data found a mean population-weighted incidence of 22/100,000 person-years, with substantial variation between countries. Highly endemic countries such as Slovenia, Germany and Austria, the Baltic coastline of southern Sweden, and some Estonian and Finnish islands may record over 100 cases per 100,000 population per year. In 2018, the average recorded incidence for the north-eastern USA ranged from 2.3/100,000 in Massachusetts to 92/100,000 in Maine.

Following the bite of an infected tick, early localised Lyme disease begins in the skin with a slowly expanding rash called erythema migrans in about 60% of cases. There may be fatigue, headache, malaise and flu-like symptoms. Treatment with antibiotics in the first few weeks and months is vital since early treatment is more effective. If a diagnosis is delayed, late Lyme disease can cause a multi-systemic illness that may involve the nervous system, joints, heart, skin and eyes. Post-treatment, Lyme disease may result in a range of debilitating symptoms, with 12–50% of patients reporting persistent symptoms and significant impairment in quality of life. Interestingly, symptoms may resemble those seen in long COVID, and further research is needed into the cause and treatment.

There are many genospecies of Borrelia, and those which cause Lyme disease belong to the Borrelia burgdorferi sensu lato complex. Three main genospecies are involved, and symptoms may vary accordingly:

Borrelia miyamotoi, discovered in Russia in 2011, is endemic in Europe and the north-eastern USA. It has been identified in UK ticks, with no recorded human cases to date. It causes a Lyme-like illness with symptoms similar to relapsing fever: high fevers, respiratory and gastro-intestinal symptoms but no rash.

The enzootic life cycle of ticks and Borrelia

Ticks are small blood-sucking arthropods that need humidity and shade to survive. They can be found in woods, fields, rough pasture and moorland but may thrive in urban parks and gardens. Ticks are more active from April to October but continue their quest for food during milder winters. The varying seasonal incidence of Lyme disease reflects increased tick activity during warmer months, peaking in June with a smaller peak in September.

There are four stages to a tick’s life cycle: egg, larva, nymph and adult. Ticks feed on the blood of animals and ground-feeding birds and acquire Borrelia whilst feeding on the blood of an infected host. In the UK, in locations where studies have been carried out, 0–16% of ticks were shown to be infected. B. burgdorferi may be transmitted to the next stage during moulting, but not to the eggs. Survival of Borrelia is therefore not only dependent on the tick vector, but also the availability and abundance of wildlife hosts such as mice and ground-feeding birds which act as a natural zoonotic reservoir for the bacteria. Deer play a key role in dispersing ticks over large areas and supporting reproduction, but possess natural immunity to Borrelia, so do not carry the bacteria. In addition, migratory birds may spread ticks and tick-borne diseases over large distances.

B. burgdorferi has evolved as an obligate parasite, managing the difficult passage between tick and warm-blooded host via tightly regulated differential gene transcription, which controls the expression of a range of outer surface proteins necessary for key functions such as survival in the flat, unfed tick, and virulence and immune evasion in the animal host.

Ticks may host diverse microbial communities including pathogens such as Anaplasma, Babesia, Rickettsia and certain viruses. There is a risk of importing foreign tick species on pets and livestock from abroad, potentially introducing non-endemic ticks and newly emerging human and animal diseases.

Climate change may result in changes in temperature, rainfall, humidity, snow cover and vegetation. Studies from Europe show that ticks have spread into higher latitudes and altitudes. Tick surveillance from various countries shows they have become generally more abundant. Micro-climates such as south-facing slopes of mountains may favour tick survival. Evidence suggests that ticks can adapt to survive and thrive in colder, drier conditions. These changes are thought to be related to the effect of climate change, directly on ticks and indirectly on the abundance of their animal hosts, particularly the presence and spread of roe deer.

Changes in biodiversity and land management

Since the main reservoir for Borrelia in nature is small mammals, such as mice, factors which alter their abundance can have a cascading effect on tick density, tick infection rate and risk of Lyme disease. Landscape change and the effect on reservoir host abundance is thought to be a key factor behind the rising incidence of Lyme disease. Green corridors which allow wildlife to move between different areas may favour the spread and increase of tick populations. Studies show that the density of tick populations may be increased in areas adjacent to woodland, particularly deciduous woodland. Any factor, whether man-made or natural, which leads to significant loss of larger predators at the top of the food chain may have a significant impact on the survival of animals upon which ticks feed and reproduce, and small mammals such as mice which form the main reservoir for Borrelia in nature.

There are wide-ranging health benefits from engagement with the natural world and outdoor pursuits which cannot be over-emphasised. Indeed, outdoor exercise has played an essential role in people’s lives during the current COVID-19 pandemic. At the same time, both occupational and leisure activities may increase tick exposure and the risk of Lyme disease.

Because of the enzootic life cycle of ticks and Borrelia, as described above, it follows that it is not possible to eradicate Lyme disease from its natural habitat. However, the public health risk of ticks and Lyme disease can be managed by the following interventions:

Currently, there is no vaccine for Lyme disease licensed for use in humans, though some are in development.

Sandra Pearson is a retired consultant psychiatrist and was medical director of the UK charity Lyme Disease Action until 2020. She co-authored the Royal College of General Practitioners (RCGP) eLearning module and the RCGP Spotlight Project on Lyme disease. She has lived experience of Lyme disease as a carer.

Lyme Disease Action (LDA) is a UK charity which aims to raise awareness of Lyme disease and lobbies for research and improved services. It provides accredited information for the public, patients
and health professionals.

I became involved with Lyme Disease Action after my husband developed severe Lyme disease in 2008, which had a major impact on both our lives. My role as Medical Director enabled me to attend major microbiology conferences such as ECCMID, as well as key European and American tick-borne diseases conferences. I had the great privilege of meeting and speaking with leading researchers and academics in the field. Through reading and attending meetings and conferences, I became fascinated by the advances in science which were beginning to enable a better understanding of Borrelia burgdorferi and Lyme disease.

I think it must be both a challenging and exciting time to be involved in microbiology. Advances in the fields of molecular microbiology and genomics are pushing back the frontiers of science, raising the possibility of new advanced tests, treatments and vaccines for a range of infections. I hope that our understanding of Lyme disease will benefit from such scientific advances, which is of vital importance for patients and clinicians who may be facing challenges in diagnosis and treatment.