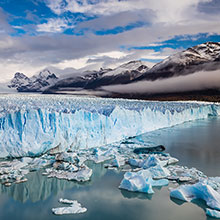 The coldest parts of our planet are the fastest warming. Glacial ice locks away 70% of all fresh water, but if just a little of this ice is lost to the sea it threatens low-lying lands. A wealth of measurements, models and media attention speak to this intertwined fate of climate, ice and coastlines. But glaciologists found themselves unable to explain exactly how phenomena considered purely physical, ranging from rock weathering underneath glaciers to the melting of snow and ice surfaces, worked in the constant cold. Realising, at the turn of this century, that glaciers are ecosystems and microbes thrive from the top to the bottom of glaciers changed everything.

The birth of a glacier starts with a single snowflake. High in the atmosphere, ice-nucleating bacteria and dust catalyse the formation of the snowflakes themselves. Other microbes are washed out from the atmosphere or arrive in wind-blown dust. With a suitably long incubation period of a decade or more, accumulated snow is transformed from delicate crystals to hard glacial ice. This co-culture of microbes and ice crystals results in the entombment of microbes in the ice of glaciers. Globally, this represents a vast pool of microbial biomass almost a hundred times larger than in rainforest soils. But life in this icy jungle persists at a glacial pace, entrained in the flow of ice, sustaining itself in the microscopic voids between ice crystals for millennia. Viable bacteria have been recovered routinely from the deepest ice cores. The genomic diversity of this deep-frozen culture collection has barely been mapped, so our understanding of the adaptations required for long-term survival is limited.

Life beneath thousands of metres of ice seems vibrant in comparison. In the beds of glaciers and ice sheets, where ice rests on rock, life prevails in perennial darkness and in freezing temperatures, with nearly no nutrient availability. Some bacteria consume leftover soil carbon trapped by the last ice age, while other microbes turn to lithotrophy, respiring iron and sulfide weathered from traces of fools’ gold. Others still use the hydrogen released from bedrock ground down by the ice. Crucially, an active methane cycle is present in the dark depths of these subglacial ecosystems. The balance between methanogenic Archaea and methane-oxidizing microbes can result in the net release of methane at the ice margin, further fuelling climate change, for methane is a potent greenhouse gas. In spite of the diversity of habitats and metabolisms within the geological ice cream sundae of crushed rock, ancient carbon, ice and bedrock of subglacial ecosystems, they are poorly understood environments because direct access to the bed of glaciers and ice sheets is challenging. The lakes, rivers and wetlands that form beneath ice sheets are teeming with microbial life. Using strict contamination-preventing precautions, researchers have successfully sampled two subglacial lakes – Whillans and Mercer – of the hundreds found beneath the Antarctic ice. These drilling missions have described ecosystems inhabited by thousands of different kinds of bacteria and active methane cycles within lakes well-connected with the margin. Glacial science awaits the successful, clean sampling of subglacial lakes truly isolated for hundreds of thousands of years to understand if and how life survives within them.

Squashed under its own weight, ice flows. After all, glaciers are essentially frozen rivers. As ice flows to warmer microclimates at lower altitudes, it begins to melt. Afforded plentiful liquid water, dissolved nutrients and intense sunlight in summer, the surfaces of glaciers and ice sheets harbour ecosystems driven by photosynthesis. Sandwiching photosynthetic pigments and products at the interface between glaciers and the Anthropocene atmosphere creates a paradox. As life thrives here by fixing carbon dioxide from the atmosphere, its conversion into coloured biomass hastens the death of glaciers. Ice and snow reflect most solar energy, but dark biomass absorbs this energy, melting underlying ice or snow.

Aristotle first described red-stained snow as a biological phenomenon. We now recognise that this is in fact caused by green algae which accumulate red carotenoid pigments as protection against the harsh effects of the sun on snow. These algae are the charismatic microflora of the glacial ecosystem, colouring swathes of the snow-surface pink. On bare ice, glacier algae face similar challenges from intense solar radiation. Their solution is the concentration of intense brown or purple pigments as sunshades atop their chloroplasts. Glacier algae belong to a group of organisms between the green algae and ancient land plants. It is likely they have been inhabiting glacier surfaces for hundreds of millions of years, but their importance has only been realised in the last decade. The Greenland Ice Sheet, the largest mass of ice outwith Antarctica, is heavily colonised by glacier algae at its southwestern edge – the Dark Zone. Visible from space, we fear this biological darkening is pushing the Greenland Ice Sheet over the edge.

The most elegant ecosystem of all sits within the ice surface: small potholes called cryoconite holes that litter the ice surface, representing remarkably stable microenvironments. Dark debris – cryoconite – coalesces on the ice surface, encouraging melting and resulting in downward growth of the hole until it reaches a depth where the melting rate at the hole-bed matches that of the surface. Coincidentally, this depth is where optimal levels of sunshine reach the cyanobacteria, fuelling intense carbon fixation. Cryoconite forms by filamentous cyanobacteria ensnaring dust particles within their extracellular polysaccharides. Cryoconite granules often exist as lawns the thickness of single granules, increasing the surface exposed to sunlight. The simple experiment of overloading cryoconite holes by spooning in extra cryoconite dramatically alters the shape of the cryoconite hole until the hole bed can accommodate a single granule lawn once again.

Cryoconite holes are essentially photosynthetic micro-reactors in the ice surface. High rates of photosynthesis within the cryoconite granules sustain biodiverse and abundant microbial communities containing bacteria, fungi, protozoa and even tardigrades. In the balmy porous ice surfaces of Arctic or mountain glaciers, nutrients and cells are free to flow between holes, whereas in the deep cold of the Antarctic, cryoconite holes typically survive under thick ice lids for years to decades as self-contained biotic and abiotic islands. Even in the most austere of these glaciers, where katabatic winds scour and polish the perennially frozen blue ice, the surfaces are pockmarked by cryoconite. The most feasible source of microbes in these sub-zero ice oases are cells entrained in the polar ice for millennia. While intense predation of cryoconite bacteria by viruses results in the leakage and recycling of carbon to the extent the cryoconite food web is truncated, these are without doubt the microbial oases of the glacier surface.

Ultimately, all these microbes and the carbon and nutrients they cycle help seed the soils formed as glaciers recede and the rivers and coasts fed by glacial meltwater. As glacier microbiologists, we heed the changes of the coldest parts of our planet and face up to the realities of glacier loss over the next decades. We are sometimes asked if we might be able to engineer these ecosystems to reduce their melting potential. As we learn more about the diversity and evolution of glacier microbes, perhaps the better question is if we can engineer our ecosystems to sustain these enigmatic life forms.

Glacier microbial ecology research by the authors has been supported by NERC MicroMelt (NE/S001034/1), Research Council of Norway BIOICE, and the South African National Research Foundation.

Arwyn Edwards is a Senior Lecturer in Biology and Director of the Aberystwyth University Interdisciplinary Centre for Environmental Microbiology. His research in planetary health microbiology focuses
on the interactions of cold-region microbes with climate. When not in Aberystwyth, he can usually be found sampling microbes in the polar regions. Arwyn has been a member of the Microbiology Society since 2003.

Jarishma Gokul is a Researcher in Microbiomes and Lecturer in the prestigious next Generation of Academics Program (nGAP) at the University of Pretoria, South Africa. Her research to date covers the microbial ecology of polar and temperate terrestrial and marine landscapes, as well as the seed–soil–plant–food–human microbiome nexus. Jarishma has been a member of the Microbiology Society since 2014.

Sara Rassner is a Postdoctoral Research Associate on the NERC-funded project MicroMelt at Aberystwyth University. Her research is focusing on the interplay between microbial community interactions and the surrounding environment, both on glaciers and in other cool places. Sara has been a Microbiology Society member since 2017.

What do find most enjoyable about your work?

Arwyn Edwards: From coronaviruses to cryoconites, microbiologists are working on crucial aspects of some of the greatest challenges facing us as a species and a planet. But we also have the opportunity to train future microbiologists to address these challenges. The balance between the two is compelling.

Arwyn Edwards: In 1995, my Year 7 Science teacher at Ysgol Dyffryn Teifi in Ceredigion got hold of some agar plates and convinced the class to ‘donate’ some microbes. Even though she sealed the plate carefully, this is not an experiment I would repeat in such settings today! However, the diversity of colonies that grew was amazing. It was my first peek at an invisible world which has been fascinating to explore ever since.