Microbiology of coral resilience –with a little help from my friends 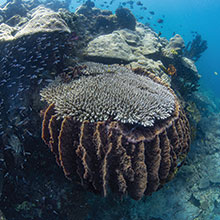 It’s been a long way since I became considered a coral microbiome researcher. And unlike many of my friends and colleagues, I am not a traditional microbial ecologist delving into the field of genomics. Quite the opposite actually. Traditionally, I am a genomicist. I like data, big data, and I like computers. I like systematic, large-scale approaches and figuring out analytical routines that work across a large set of samples or data. But I also like going out to ‘disconnect’, quite literally, from the modern world of tech. Since I was a kid, I have felt drawn to the mystic of the ocean – such a vast place, still less explored than the surface of the moon, with many exciting discoveries to be made! I grew up academically when it actually became feasible to look at all the genes or proteins of an organism at the same time – in parallel – and when genome sequencing was no longer a pipe dream, reserved for a few model organisms we value dearly, but became considered a valuable foundation for many research avenues. Having had my share of work with the fruit fly and the mouse during my Master’s and PhD studies, only as a postdoc I returned to my passion for the ocean by making it part of my scientific career; this, by the way, comprised a considerable chunk of my lifetime, so I knew I’d better do what I love in order to love what I do. This time around, however, I brought an entire arsenal of model system genomics with me to study the vast range of symbiotic interactions occurring in the busiest and most biodiverse marine ecosystems of them all – coral reefs.

If you study coral reefs, you have to pick your choice. Literally 1000s of species flourish in healthy coral reefs – they are teeming with life and in fact feel more like a busy city. This is, after all, a well-justified comparison, since coral reefs constitute the largest biogenic structures on earth. So large that you can actually spot them from the moon. Well, the Great Barrier Reef in Australia that is, which is the largest reef system in the world. Close to a billion people depend on coral reefs for their livelihood, be it as a source of protein, for coastline protection or as a source of income (from tourism for example). For me, it was always clear that my pick is corals, quite literally the foundation species of these ecosystems. To the untrained eye, they might be mistaken for colourful rocks, but they are actual sessile animals that ‘learned’ to live like a plant. This is because they host little plants, i.e. microalgae called Symbiodiniaceae, inside their tissues that provide them with sugars from photosynthesis. The symbiotic relationship is so successful that it covers close to 100% of the coral’s energy needs and provides the basis for corals to build calcium carbonate skeletons. These in turn give rise to the three-dimensional spatial structure of reefs that then provide habitat for the myriad of species one can find.

But the story doesn’t end here. Besides Symbiodiniaceae, coral animals associate with many other organisms, most notably bacteria, but also fungi, other algae, protists, archaea and viruses that all contribute in one way or another to the biology of corals. This is why we speak of coral holobionts to acknowledge that it takes the cooperation of many organisms to make a reef. Coral biologists have understood this for quite some time: that symbiotic relationships with micro-organisms are the building block of success for corals. But it wasn’t until about a decade ago that it was connected to the bigger notion that the metaorganism – the organism of organisms, the sum of the multicellular host and its microbial associates – constitutes the functional biological unit one must consider. Biology at large came to acknowledge that microbes matter, not only in their own right but as symbiotic associates of animals and plants. This we also knew for quite a while. Think about the plant–rhizobia relationship: literally a textbook example of how soil bacteria engage with plant roots to produce nitrogen in return for receiving nutrients. What changed is the notion that pretty much all life is symbiotic: metaorganisms are rather the rule than the exception. Concomitant to the understanding that bacteria extend the capabilities of their host organisms is the notion that these associations are, to a degree, flexible. Hence, one can acquire new traits through association with novel microbes and potentially adapt to a changing environment, notably at a much faster rate than by means of (host) evolution. All that it takes is a microbial changeover.

Which brings us back to coral reefs. Life seems peachy as a coral, but the reality is that corals have faced unprecedented loss over recent decades. We have lost about half of all coral. Part of it is due to local factors, such as overfishing, pollution and coastal development. But the symbiotic relationship between corals and their microalgae is extremely sensitive to increases in water temperatures past their historic summer mean. Extended periods of warming lead to so-called coral bleaching, i.e. the physical whitening of coral animals due to the loss of their colourful symbiotic microalgae. Without their algae, corals lose their source of food and eventually die of starvation. This is a phenomenon that was pretty much unknown before the 1980s, at least with regard to widespread bleaching. Nowadays, climate change is fuelling ocean warming and has led to three global mass coral bleaching events over the last two decades. The fear is that we may be at risk of losing reef ecosystems at large under the ongoing projected warming. Ironically, and devastatingly, even the projected curbing of global warming to under 2 °C may be too warm for many corals to survive. So, we need to do something about it.

It’s understood that bleaching is intimately linked to the microbes that coral associates with, most prominently to the type of Symbiodiniaceae microalgae. Hypothetically, the loss of Symbiodiniaceae during bleaching provides an opportunity to associate with novel, more thermotolerant microalgae, known as the ‘Adaptive Bleaching Hypothesis’. And indeed, microalgal turnover can be observed in the wild. However, such novel associations typically only last for the duration of the thermal anomaly and return back to their original configuration shortly thereafter. Such high ‘symbiont fidelity’ may be explained by the long evolutionary history that both organisms share, which may lead to co-diversification if not co-evolution. In layman terms, the coral and the microalgae have learned to live with their partner’s peculiarities and it may not be so easy to engage in new relationships. The case is different, however, for bacteria. The majority of coral-associated bacteria do not reside intracellularly, but rather tend to be found in the so-called surface mucus layer, which provides protection to the coral tissue, while allowing gas and metabolite exchange – very much like the mucosal surface of our mammalian guts. In this space, association is far less committed, and we now know that the microbiomes of many corals adapt when exposed to thermally stressful environments that can turn bleaching-susceptible into more resilient coral. Such ‘microbiome flexibility’ is fuelling the promise that adapting with microbial help to more strenuous environments may provide an alternate, more rapid route to organismal adaptation. Indeed, most recently, manipulation of coral microbiomes, through the addition of native beneficial bacteria, demonstrated the ability of coral probiotics to mitigate bleaching and their potential as a ‘therapy’ to minimise coral mortality. While I witnessed the increasing deterioration of coral reefs in my own lifetime, it is reassuring to see a potential treatment emerging. Many open questions remain, but one thing is for certain: we are metaorganisms in a bacterial world, providing tremendous yet to be explored opportunities.

Professor of Genetics of Adaptation in Aquatic Systems, Department of Biology, University of Konstanz, Konstanz 78457, Germany

First off, I feel immensely privileged to be able to do the work that I do, interact with so many smart and motivated people and get to know and experience parts of this world that few get to see. Probably what I find the most challenging is how to make an actual real-world difference. Research is gratifying, but we have a responsibility to step out of the ‘ivory tower’ and participate in the societal discussion about what world we want to live in and how a world needs to look like that we (and future generations) can live in. I am challenging myself to find better and more ways to engage in this.

What do you see as your greatest achievement?

I think I am good at enabling people and advancing methods/approaches, really connecting dots of things that are partially there but need some further push to ‘become mainstream’. I am proud of SymPortal (symportal.org) because it standardises how we analyse the microalgae (Symbiodiniaceae) that coral associate with. Similarly, the Coral Bleaching Automated Stress System (CBASS) implements standardised diagnostics for coral bleaching susceptibility and is experiencing increasing popularity. Last, the notion of ‘microbiome flexibility’ provides a framework to interpret the capacity for microbial manipulation to support coral resilience. In all these cases, my main job was providing the intellectual space, academic freedom or financial means to either support incredibly talented people or to connect the lines of existing prior work/research.

Image: Anna Roik. Corals provide the structural and spatial framework of reef ecosystems through their calcium carbonate skeletons, which serves as a habitat for a myriad of species and can resemble the complexity and busyness of big cities..