The increase in global aquaculture and the associated protists: opportunities and threats 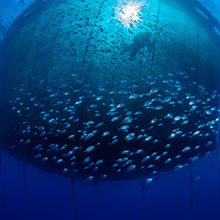 According to the Food and Agriculture Organization (FAO; 2020), the contribution of aquaculture to the global production of finfish, crustaceans, molluscs and other aquatic animals had increased up to 46%, representing 114.5 million tonnes worth $263.6 billion, by 2018 compared with 26% in 2000, and is predicted to double by 2050. Besides aquatic animals, 97% of all aquatic algae come from seaweed farms and microalgal production is rapidly increasing. Among crustaceans, marine shrimps dominate the production and make them an important income source for developing countries in Asia and Latin America. In Europe, fish and molluscs dominate the industry. Atlantic salmon is the most important fish species with the largest proportion of export revenue, grown mainly in Norway and the UK. In the UK, aquaculture production was 197,000 tonnes worth $1.3 billion.

Planktonic protists: the basis of the food web

The term phytoplankton covers a huge range of organisms that form the basis of the food web, including protists e.g. algae, dinoflagellates, diatoms and bacteria such as cyanobacteria. A diversity of microalgae is grown in aquaculture hatcheries as a food source. There can be a fine line between phytoplankton being beneficial or detrimental in aquaculture. Algae such as Chlorella spp. and Chaetoceros spp. can serve as a food source as well as being able to utilise and remove overabundant nutrients, improving the water quality. However, if the same species grow excessively, massive die-off events can lead to oxygen depletion in the system, stressing and killing the farmed organisms. Certain taxa such as the dinoflagellates Gymnodinium and Ceratium can cause harmful algal blooms that lead to oxygen depletion and can release biotoxins. Other algae (including Chlorella) may act directly as pathogens of cultured animal stocks. A diversity of other protists presents a range of health threats to aquaculture, as described in the next section.

A broad diversity of protists is associated with diseases in aquaculture

Neoparamoeba (Paramoeba) species are found in marine environments and despite typically being free-living amoebae, they are known to cause amoebic gill disease (N. perurans) in ray-finned fishes and have also been isolated from diseased sea urchins and crabs (N. invadens, N. pemaquidensis and N. branchiphila). The ichthyosporean (holozoan) Ichthyophonus is associated with cardiac pathology and other tissue tropisms in freshwater and marine fish. Flagellates are also known to be important pathogens. Ichthyobodo necator causes ichthyobodosis on fish skin and gills. The dinoflagellate Amyloodinium ocellatum is an ectoparasite that causes marine velvet disease in both marine and low-salinity brackish waters, whereas Ichthyodinium chabelardi infects the eggs and larvae of several marine fish species. The ciliate Cryptocaryon irritans causes white spot or saltwater ich in many fish that live in temperatures between 15 and 30 °C. Its unrelated (but still ciliate) freshwater counterpart Ichthyophthirius multifiliis, which similarly shows low-host specificity, is a menace to the cultured and ornamental fish trades. Gregarines are widespread apicomplexans, some of which infect shrimp. Two main genera are distinguished, Nematopsis and Cephalolobus, with a third, Paraophioidina, only described in cultured post-larvae of whiteleg shrimp. The ascetosporeans Marteilia, Haplosporidium and Bonamia (Rhizaria) are problematic for both production and trade in marine molluscs.

Many protists are associated with general tissue and organ damage. This is the case for both Microsporidia and the protist-like Myxozoa (which are highly specialised cnidarians and include many parasites of fish and other vertebrates, including Tetracapsuloides bryosalmonae, the causative agent of proliferative kidney disease in salmonids). The microsporidians Desmozoon lepeophtherii and Loma salmonae are associated with proliferative gill disease in several species of salmon and rainbow trout. Interestingly, D. lepeophtherii also infects sea lice, to which fish in aquaculture can be vulnerable to infestations. Nucleospora cyclopteri is associated with plasmocytoid leukaemia in lumpfish; Enterospora nucleophila causes emaciative microsporidiosis of gilthead sea bream; and the microsporidian parasites Enterocytozoon hepatopenaei and Enterospora canceri cause diseases in shrimp and crabs, respectively. Microsporidians are frequently associated with emerging diseases in a wide range of hosts, which is partly explained by their ubiquity and high diversity in many environments, including situations in which aquaculture is being intensified.

Enterocytozoon hepatopenaei (EHP) infects the epithelial cells of the shrimp hepatopancreas and, since its incidental discovery in 2009, has emerged as one of the most impactful pathogens in (sub)tropical shrimp aquaculture. In Thailand alone, economic losses due to EHP have been estimated at >$230 million per year. It is implicated in sub-optimal growth disorders, other syndromic diseases and mortalities in shrimp, the aetiology of which has been associated with EHP’s co-infection with other pathogens, including the Laem-Singh virus. EHP also makes shrimp more susceptible to bacterial (Vibrio) diseases, acute hepatopancreatic necrosis disease (AHPND) and septic hepatopancreatic necrosis. The interaction of apparently ‘primary pathogens’ such as EHP with other host-associated pathogenic agents and micro-organisms is likely a more important factor in pathogenesis and disease susceptibility than previously recognised, which has recently led to the development of the pathobiome concept, acknowledging the interaction of host and environmental factors with the diversity of host-associated symbionts. Many examples of pathobiotic systems remain to be elucidated; a recent example being the diversity of Vibrio species endosymbiotic within (Neo)paramoeba peruans, the causative agent of amoebic gill disease in salmon. In general, the diversity and roles of animal- and plant-associated microeukaryotes is poorly known and the accepted wisdom regarding their role in pathogenicity should often be questioned in the framework of a context-dependent ‘symbiotic continuum’ of pathogenic effects, rather than ‘hard-wired’ host–pathogen relationships.

Fig. 1. Representation of the eukaryotic tree of life, based on recent publications. Supergroups are indicated in bold, and lineages containing microbial parasites/pathogens relevant to aquaculture are indicated by red dots and genus names. Notably, this diversity is distributed across most of the eukaryotic tree, even without aspiring to be comprehensive. We would like to thank Kira More (University of Alberta, Canada) for providing us with the artistic template of the tree. 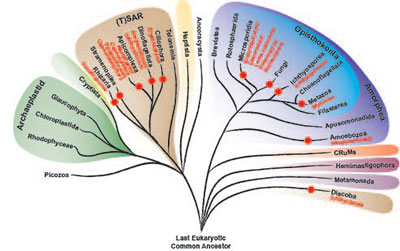 Managing microbial threats in aquaculture should consider the multi-domain nature of pathogenic agents (both impactful ‘notorious’ and emerging pathogens may be viral, bacterial or eukaryotic, as demonstrated by the last 30 years of increasingly intensified and diversified aquaculture) and their interactions in the (often highly modified and unstable) aquaculture ecosystem. Our very incomplete knowledge of the diversity and role of microeukaryotes in these systems frustrates efforts to manage and ameliorate compromised host health in these systems and to design robust diagnostic methods. As exemplified by the recent and rapid emergence of EHP, many more pathogens are endemic to and likely to be favoured by these modified systems. Diagnostic techniques can only target what is known; therefore, rapid characterisation of emerging pathogens is essential, as is an understanding of the phylogenetic diversity from within which these arise.

The diversity and complexity of host-associated microbes present a related challenge to global biosecurity: movements of stock and traded goods can transfer both known and unknown pathogenic agents along with their hosts and associated media. From a more positive perspective, the potential for improved pre- and pro-biotic treatments will be more easily realised when their constituent taxa are better understood and the role of microeukaryotes as feed for cultured stock, for example algae co-cultured in the pond environment or the (potential) role of microeukaryotes in shrimp culture biofloc systems, is ripe for development. Overall, a better understanding of, and ability to optimise, the ecological system within which stock is grown must inevitably focus on the most diverse and abundant organisms in aquaculture systems – i.e. microbial lifeforms – rather than a much narrower focus on a particular disease or other isolated element of a particular system.

Professor of Parasitology, Infection and Microbiology Research Group Leader, School of Health and Life Sciences, University of the West of Scotland, Paisley PA1 2BE, UK

All authors are elected committee members of Protistology-UK, a society that aims to promote the study, teaching and dissemination of all aspects of protistology, from ecological to medical and from sub-cellular to population studies.

Since 2018, Protistology-UK and the Microbiology Society have formed a partnership to bring together and share knowledge between communities for the benefit of their memberships.

More information about the authors and news regarding the society can be found at protistology.org.uk.

Sonja Rueertck: Aquaculture is still one of the fastest-growing food production industries, and protistology is emerging as a major field of study. This is not only due to their critical participation in relevant food webs and feed supply for aquaculture, but also because protist ecology is changing in response to climate change. We have already identified a number of disease-causing protists, but there will likely be an increase in protists’ pathogenic potential and/or their ability to harbour other potential microbial pathogens through parasitism or endosymbiosis.

What advice would you give to someone starting in this field?

Sonja Rueckert: Protistology in aquaculture is a diverse field. Besides gaining knowledge of relevant species and groups of protists, networking with individuals in the industry and understanding what the challenges in aquaculture are is important when starting in this field.