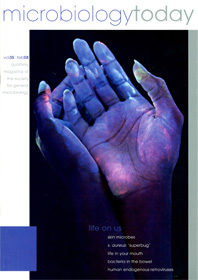 The lead articles of the February 2008 issue of  Microbiology Today are on skin microbes; S. aureus: 'superbug'; life in your mouth; bacteria in the bowel; and human endogenous retroviruses.

Lucy Goodchild  takes a look at some stories that have hit the headlines recently.

Robin Weiss discusses how humans are mobile ecosystems that harbour a wide range of micro-organisms.

Despite the harsh environment in which they live, Mark Farrar and Richard Bojar explain that microbes on the skin are amazingly diverse.

Although S. aureus can be a killer, Simon Foster explains how it is not always harmful and it has a tough fight to survive on our bodies.

Dave Spratt explores how the surfaces of the oral cavity offer a home to a variety of microbial communities.

Gerald Tannock discusses how commensal bacteria in the bowel of young humans play a vital role in determining their future health.

David Griffiths and Cécile Voisset explain how human retroviruses have invaded our germ-line for centuries and now make up ~8% of our genomes.

Hitting puberty is often a stressful and confusing time in a teenager's life, so Gemma Sims offers her insight and advice in 'Microbes and puberty: a teenager's guide', a taster from the larger resource 'What your mum might not know and probably hasn't told you'. Meanwhile Sue Crosthwaite describes her experience at a three-week Summer School at The University of Manchester, an event designed to encourage A-level students in their interest and study of microbiology.

There are a whole range of activities to support early career scientists, of which Jane Westwell gives a few examples particularly relevant to microbiologists. The Society also speaks to Gemma Walton, a postdoc at University of Reading, in a Q&A format.

Lucy Goodchild reports on the Society's successes in 2007 in promoting microbiology to the public, the media, opinion-formers and policy-makers.

Dave Reay writes about how policy-makers around the world can no longer ignore the role played by micro-organisms in climate change.