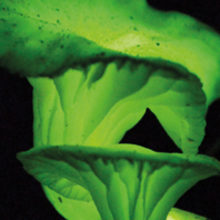 The first historical anecdote describing the phenomenon of mushroom bioluminescence was by Aristotle in the third century BC. The ability for an organism to produce noticeable light in the dark involves a complex duel with its environment. Only recently some clues of ‘how’ and ‘why’ fungi produce light have been revealed.

Found in temperate and tropical locations worldwide are almost 80 species of bioluminescent mushrooms. All are within the order Agaricales, the gilled-mushrooms, from the Basidiomycota phylum. Based on the phylogenetic distribution of this trait it seems that its evolutionary history is complex, with numerous gain and loss of function events. The Mycenaceae and Marasmiaceae families contain the majority of bioluminescent species including such amazing species as Neonothopanus gardneri, Panellus stipticus and Mycena luxaeterna. Often the entire fungal organism (i.e. mushroom and mycelium) is bioluminescent but this is not true of all luminescent species. Only the stipe of M. luxaeterna is luminescent with all other tissues non-luminescent. The Honey Mushroom, Armillaria mellea, also has a non-uniform bioluminescent display with only luminescent mycelium. Another luminescent display variant is P. stipticus. This species is normally non-luminescent, but strains from eastern North America are luminescent. Unlike other bioluminescent systems, which only emit light upon stimulation, fungal luminescence is continuous although the intensity fluctuates.

N. gardneri, first described by George Gardner in 1840, is found in the Coconut Forests (Mata dos Cocais), a transitional biome between the Amazon forest and Caatinga (a desert-like region), of the central and northeastern Brazilian states of Maranhão, Piauí, Tocantins and Goiás. N. gardneri is one of the biggest and brightest known bioluminescent mushrooms, the diameter reaching 10 cm. It grows on decaying fronds still attached to the base of young babassu palms (Attalea speciosa). Since they look like a flower growing on the palm tree, it is locally called ‘flor-de-coco’ (coconut flower). This fungus belongs to the same lineage as Omphalotus olearius, commonly known as the Jack-o’-lantern mushroom. All tissues except the spores are strongly luminescent in nature and the lab. Both dried mushrooms and mycelium cultures are used to generate reproducible light in vitro from aqueous extracts, which is brighter and more easily observed than extracts from other fungal species. 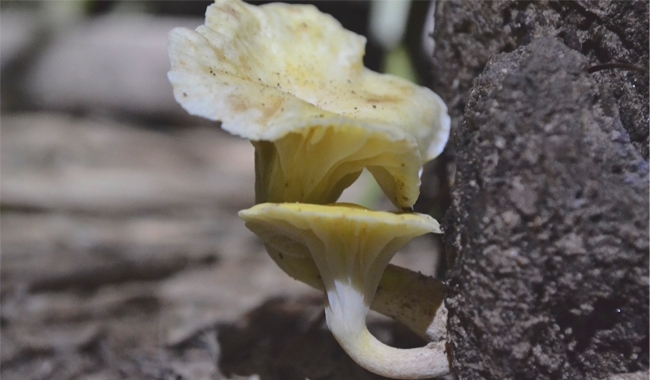 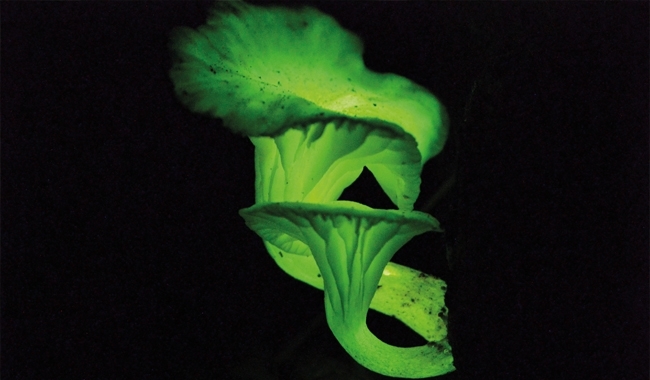 Bioluminescence, the enzymic production of light from living organisms, has evolved independently multiple times with over 40 extant systems. In general, the bioluminescent reaction involves the oxidation of a small molecule substrate, termed luciferin, by an enzyme generically known as luciferase in the presence of molecular oxygen. The oxidation yields an unstable peroxide intermediate, whose decomposition leads to the formation of oxidized luciferin (oxyluciferin) in an excited high-energy molecular state. Light is emitted as the excited oxyluciferin decays to its lower energy ground state. Each independent bioluminescent system has its own unique and non-homologous luciferase enzyme and luciferin substrate, although in some marine bioluminescent systems the same luciferin (coelenterazine) is used and obtained by some organisms through the food chain. Most lineages of life have examples of bioluminescence, notable exceptions being mammals, reptiles and amphibians, and the entire Plantae and Archaea kingdoms.

Historically, there has been controversy whether the abundant green light from fungi was true bioluminescence or due to spontaneous ultraweak photon emission generated from oxidative stress. In 2009, the enzymic nature of fungal bioluminescence was confirmed through the in vitro emission of 533 nm light from cellular extracts. The fungal luciferin can be obtained from the hot aqueous extract of dried mushrooms. The enzymes that react with the luciferin, namely a luciferin-hydroxylase and a luciferase, can be obtained from the crude aqueous protein extract, separated by ultracentrifugation into soluble (hydroxylase) and insoluble/membrane- associated protein fractions (luciferase).

Components of protein fractions, NADH or NADPH, and luciferin are required for light emission in vitro. The first step of light emission is the NAD(P)H-dependent hydroxylation of fungal luciferin precursor followed by the subsequent oxidation of the hydroxylated luciferin by the membrane-associated fungal luciferase. The detailed reaction pathway has yet to be determined, but is likely the same among all bioluminescent fungal lineages as extracts can be crossed among species and still yield light. Given that the quantum yield, the ratio of photon emission per excited molecule, of most luminescent systems is higher than 0.5, it is reasonable to expect the fungal system to consume up to two molecules of NADPH or NADH in the light-emitting steps alone. It is also reasonable to assume that fungi do not spend energy in a haphazard way. Indeed, at least in mycelium cultures of N. gardneri, fungal bioluminescence is ruled by a circadian clock. Cultures trained in a 12 h/12 h light/dark climatic chamber maintain a 24 h period of light intensity fluctuation with peak luminescence around 10 p.m. after transfer to a dark growth chamber. Similarly, the relative activities of the fungal luciferin-hydroxylase, luciferase and luciferin also peak around the same hour.

Why do fungi glow?

It is hypothesised that bioluminescence first evolved in response to the Great Oxygenation Event (2.3 Gya). Oxygen-consuming bioluminescent reactions generate light as an alternative to other oxygen-consuming reactions that generate heat. In most luminescent organisms, this light byproduct was harnessed for some additional ecological function, such as communication, predation, mating, repulsion, etc. It is hypothesised that fungal light emission functions primarily to rid cells of reactive oxygen species produced during respiration and lignin degradation (in the case of fungi). Given that fungal luminescence is diurnally regulated and not solely dependent on growth rate, it is very likely that light emission serves some secondary ecological function as well.

It is hypothesised the light functions ecologically as an attractant of insects, which help in fungal propagule dispersal. Mushrooms are sessile and require help to disperse the spores to colonise substrates in new locations. Some achieve this through the use of winds that can carry lightweight spores, and others must rely on animals when propagules are unable to be carried by wind. This has been observed with other fungi such as the stinkhorn mushroom (genus Phallus), whose foul, carrion-like odour attracts insects that disperse its spore-rich jelly-like gleba. Arthropods are well known to be attracted to light, a street lamp being a common example. Hence, it is reasonable to suspect that night-time transport of propagules by arthropods provides an effective means of dispersal and grants some advantage to fungi, especially in dense forests. 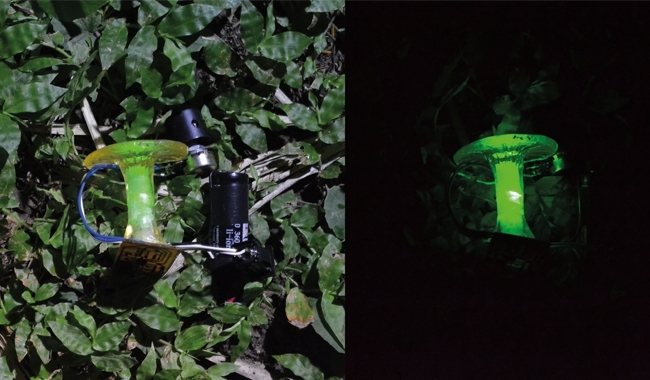 Given this, additional experiments were designed to test whether the light from N. gardneri mushrooms attract insects capable of dispersing spores. Acrylic resin phony mushrooms illuminated by green light-emitting diode (LED) lights were made that resemble typical N. gardneri basidiomes, in effect to trick the insects; non-luminescent plastic ‘mushrooms’ lacked the LED but looked and smelled alike otherwise. If bioluminescence matters to the insects then they should be attracted more to the lit acrylic mushrooms than to the unlit ones. Indeed, when these fake mushrooms were placed in the forest habitat of N. gardneri and covered in a scentless glue, hemipterans (true bugs), dipterans (flies), hymenopterans (wasps and ants) and other coleopterans (beetles) in addition to rove beetles were captured by the LED-lit acrylic mushrooms in greater numbers than the dark acrylic mushrooms. Whether this correlation between peak luminescence and arthropod attraction has evolutionary significance in this ecological niche remains unanswered.

Oliveira, A. G. & others (2012). Evidence that a single bioluminescent system is shared by all known bioluminescent fungal lineages. Photochem Photobiol Sci 11, 848–852.