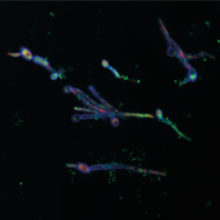 Fungi are important eukaryotic organisms, comprised of more than just mushrooms and moulds, and span beyond environmental saprophytes. Although not all are harmful, from the 100,000 fungal species identified to date, 300 are known to impact human health. These effects can be positive or negative, and this is largely mediated by their interactions with host cells and other resident microbes.

The microbiome is a complex community of micro-organisms living on and within humans. The mycobiome represents the fungi present within the microbiota that play important roles in human health. Each anatomical site has a unique microbial fingerprint that can vary with health. For example, the intestinal mycobiome differs between obese and non-obese individuals, as does the oral mycobiome of HIV-positive patients and healthy individuals.

Candida spp. are the most prevalent fungi identified in the mycobiome and, through competition, can act as a protective barrier against invading pathogens. For instance, adapted Candida albicans can protect mice against Aspergillus fumigatus, Pseudomonas aeruginosa, and Staphylococcus aureus. On the other hand, fungi can also have negative effects. For example, colonisation by Candida and Saccharomycetes is associated with hepatitis B, and the presence of Candida can exacerbate disease severity and delay healing of lesions in ulcerative colitis and Crohn’s disease patients. Furthermore, Candida colonisation is correlated with more severe instances of acute graft-versus-host disease following stem cell transplantation.

Polymicrobial interactions dominate the world around us. Just as humans are social beings, microbes constantly form relationships with other organisms. These can be competitive, where microbes fight for resources and space; or co-operative, where they work together to survive inside the host. These interactions take place in the microbial flora of healthy individuals, and in the context of disease. Many infectious diseases are increasingly recognised as polymicrobial, presenting with aggressive pathologies and increased antimicrobial resistance, leading to poorer patient prognosis.

Most polymicrobial interactions occur within mixed biofilms, i.e. communities of cells ensnared within an extracellular matrix of secreted polymers. For example, the oral cavity hosts a cornucopia of fungal-bacterial interactions, thanks to its moist, nutrient-rich environment. The composition of oral biofilms is relatively similar among healthy individuals, due to the presence of a core microbiome; however, the microbial make-up can vary greatly from one individual to another in cases of disease. It is estimated that around 80% of all microbial infections are in the form of biofilms. Common infection sites include implanted medical devices, burns, surgical wounds and mucosal surfaces, such as the lung epithelium in cystic fibrosis patients. The prolonged physical proximity of cells within biofilms encourages both intra- and inter-species communication.

The interactions between fungi and bacteria can be physical, chemical or metabolic. Fungal hyphae can provide a scaffold-like structure encouraging formation of fungal–bacterial biofilms or provide a means of transport to enable bacterial dissemination into host tissues. Both types of organism undergo quorum sensing (QS), which is the cell-density-dependent release of signalling molecules that regulate gene expression. The most well-studied cross-kingdom QS interactions are those between C. albicans and P. aeruginosa, some of which can directly affect virulence.

Fungi feature prominently in the fight against antimicrobial resistance. There are currently three main classes of antifungals: azoles, polyenes and echinocandins. The most recent antifungals, anidulafungin and posaconazole, were developed in 2006. The classification, in 2018, of Candida auris as the first multi-drug-resistant fungal ‘global outbreak pathogen’ highlights the urgent need for novel antifungal therapies. As most infections are polymicrobial in nature, this has further implications for antimicrobial drug efficacy. For example, Streptococcus mutans has been shown to protect C. albicans biofilm cells from the effects of the antifungal fluconazole, via secretion of polymers that sequester the drug. Conversely, C. albicans can enhance the tolerance of Escherichia coli and S. aureus biofilm cells to the antibiotics ofloxacin and vancomycin, respectively. These co-operative interactions suggest that antibiotic–antifungal combination treatments would be clinically more efficacious in many cases.

Not all polymicrobial interactions involve direct microbe–microbe communication. Relationships between micro- organisms can also be facilitated by host cells. Fungal interactions with the immune system can influence how the host responds to future microbial invasions. For instance, previous sublethal infections with C. albicans can prime the immune system; an interaction mediated by the fungal cell wall component, β-glucan, and the phagocyte surface receptor, Dectin-1. This ‘training’ leads to enhanced leukocyte recruitment, cytokine production and infection clearance when exposed to secondary pathogens, such as P. aeruginosa, or repeated inoculation with C. albicans.

Courtney Kousser is a fourth year PhD student in Dr Rebecca A Hall’s lab. Courtney’s research focuses on the interaction between the deadly fungus, Rhizopus microsporus, and the opportunistic bacterium Pseudomonas aeruginosa within the host. She has been a member of the Microbiology Society since 2016 and won the 2018 Sir Howard Dalton Young Microbiologist of the Year Prize.

Farhana Alam is a second year PhD student working in Dr Rebecca Hall’s lab. Her research, in collaboration with Dr Jessica Blair, focuses on fungal–bacterial polymicrobial biofilms and their effects on antimicrobial resistance.

Rebecca Hall is a current MRC-funded Career Development Award Fellow and Lecturer in Microbial Adaptation at the University of Birmingham. Rebecca is interested in how microbes adapt to the environment of the host and the consequences this adaptation has on disease progression. She has been a member of the Microbiology Society since 2014, and is a member of the Eukaryotic Division.

Farhana: Microbes include a hugely versatile range of organisms. They are integral to the functioning of most ecosystems, yet we are still in our infancy in understanding their impact.

Courtney: Micro-organisms coat every surface around us, on us, and in our bodies. By understanding how microbes function and how they can impact us, we can better learn how to work with them or fight them.

Rebecca: Studying all aspects of microbiology is important to enhance our understanding and to make new discoveries. Microbiology has been at the heart of identifying the basic principles of life for decades. Even small pieces of the puzzle provide clarity to the larger picture, and open new avenues of exploration. At heart, everyone is a microbiologist, they might just not know it.

Farhana: Read widely and don’t limit yourself to your specific research area. There is much to be gained from inter-disciplinary learning; like any other form of life, microbiology does not occur in isolation!

Courtney: Attend conferences, speak to the intimidating Principal Investigator, and step outside of your comfort zone. You’ll gain confidence and become an active, well-rounded member of the community.

Rebecca: One of the best ways to get to know people, and the field, is to go to a conference, to hear lots of excellent science, ask questions and share ideas. Also, the fungal community may be small, but we are mighty, collaborative and enjoy a good dance!