Human noroviruses and gut bacteria: friends, frenemies or both? 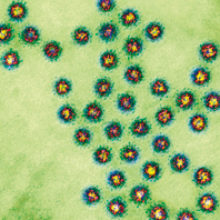 One does not normally use phrases like ‘projectile vomiting’ or ‘explosive diarrhoea’ casually, but in the case of human noroviruses, these terms can often be applied. Norovirus gastroenteritis commonly manifests in the form of vomiting, diarrhoea and abdominal cramping – many times in concert to a degree that would not be forgotten anytime soon.

Conversely, a small portion of people shedding norovirus, anywhere from 5-30%, do not display any symptoms despite shedding virus at nearly the same levels for the same duration. Like many questions surrounding human noroviruses, the specific mechanisms for this are not well understood. Despite being generally self-limiting, human noroviruses are still the fourth leading cause of foodborne death and exact a major public health burden on an annual basis.

Human noroviruses are the leading cause of foodborne illness globally, even though foodborne transmission of noroviruses comprises around 20–30% of all cases. This is no surprise given a number of properties of human noroviruses that makes their control extremely difficult. These viruses are not effectively inactivated by many commercial disinfectants; can survive on surfaces for well over a month; have a very low infectious dose; rapidly evolve to escape host herd immunity; and are asymptomatically and post-symptomatically shed. Although probably most well-known for incapacitating cruise ships, many norovirus outbreaks happen in other settings such as schools, restaurants and long-term care wards. Noroviral illness is so common that (using rough, back-of-the-envelope assumptions) in the US one could fill a little over an Olympic-sized swimming pool of foodborne norovirus diarrhoea monthly. That would be nearly 100,000 32 oz (0.95 l) soda cups per day, in case you were wondering.

The history of human noroviruses as we know them can be traced back to a gastroenteritis outbreak that occurred in an elementary school in Norwalk, Ohio during Halloween in 1968. The agent responsible for the outbreak was not known until 1972, when Dr Albert Kapikian and colleagues reported and visualised noroviruses using immune electron microscopy. Since that time, efforts to cultivate human strains of noroviruses in vitro had generally been unsuccessful. The only way to cultivate human strains of the virus was by feeding it to humans (which can still be done today if a study is being conducted and you are desperate for some cash). This forced researchers in the field to rely on related surrogate viruses, including a norovirus that infects mice. Specifically, the major hurdle in human norovirus cultivation appeared to be the uncoating stage of infection. This is because human norovirus genomic RNA could be transfected into cells and go through one stage of replication; however, upon lysing the cell, the virions just bound the outside of neighbouring cells without uncoating. In terms of binding, epidemiological and feeding studies showed that in some cases infection was related to host blood type. Specifically, the majority of human norovirus strains were shown to bind ‘histo-blood group antigens (HBGAs)’, which are carbohydrates related to blood type that are expressed in a number of tissues in the body, including the intestinal tract. These HBGAs were at least in part suspected of being a co-factor in norovirus infection, but what else was required for in vitro cultivation was unclear.

Score one for yogurt?

A major breakthrough came in 2014. Dr Stephanie Karst, Dr Christiane Wobus, Dr Melissa Jones, Dr Jan Vinje and colleagues released a study demonstrating replication of human noroviruses in a human B cell line when enteric bacteria were included as a co-factor. Prior to this, enteric bacteria had been demonstrated to have HBGA-like carbohydrates on their surface, and one had recently had been shown to bind human noroviruses (Enterobacter cloacae). The report by Karst and colleagues suggested that enteric bacteria or their HBGA-like carbohydrates promoted norovirus replication in these B cells, in part by aiding viral adhesion to cells. The group was able to demonstrate that inclusion of residual enteric bacteria in norovirus-containing stool or specific doses of heat-killed Enterobacter cloacae facilitated replication. Further, the group reported that these enteric bacteria might aid in viral translocation across the epithelial cell layer to get to B cells underneath. Despite this breakthrough, the specific identity of the bacterial proteins or lipids associated with the HBGA-like carbohydrates and the specific effect of norovirus binding on bacteria is still not fully elucidated. A number of studies surveying a broad array of enteric and lactic acid bacteria have demonstrated that numerous norovirus strains bind a number of bacteria to different degrees. Overall, this model has assisted and enabled study of human noroviruses, though with some difficulty in replication. For instance, the use of bacteria has allowed for the study of potential antiviral therapeutics for human norovirus.

Further complicating these findings have been reports that other bacteria may inhibit and inactivate noroviruses. For instance, Dr Changsun Choi and colleagues observed reduction of two human norovirus surrogates during a lactic acid bacterial fermentation, and others have demonstrated antiviral activity of lactic acid bacteria against other enteric viruses (like rotavirus) whose replication has been reported to be enhanced by enteric bacteria. Others have suggested that certain bacteria may reduce viral replication by binding and sequestering potential infectious norovirus particles, thus preventing them from binding and infecting the host cell. Although reports suggesting antiviral effects of certain bacteria on noroviruses are sparse, the issue likely deserves further investigation. 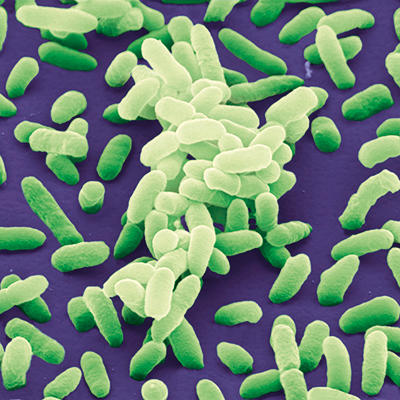 Another major breakthrough in the study of human noroviruses came in 2016. Dr Mary Estes, Dr Robert Atmar and colleagues reported successful replication of human norovirus in stem cell-derived human intestinal enteroids. These enteroids are basically made by collecting stem cells from a host’s small intestine and providing the necessary growth factors to grow a ‘mini-gut’ with a large number of differentiated intestinal epithelial cells. One major finding from this model was that enteric bacteria were not necessary for human norovirus replication for a number of different human norovirus strains. Evidence from the study did suggest that bile acids enhance infection and may be a necessary co-factor for some human norovirus strains, as well as HBGAs. Further, the study suggested that it was epithelial cells that were being infected and not B cells. Replication was observed in these epithelial cells taken from all three major portions of the small intestine, suggesting that there was no specific localisation of replication in the small intestine. However, the possibility that bacteria may cause localisation of norovirus replication and/or enhance infection still remains a possibility.

All of these interesting developments leave more questions than answers, with numerous areas ripe for investigation. Is infection only occurring in the epithelial layer or could it also be occurring in B cells? What specific bacterial proteins or lipids are responsible for binding to human norovirus? Is there another mechanism through which these bacteria aid infection beyond aiding attachment or aggregation? Are there certain bacteria that may act to inhibit human norovirus infection? What host factors affect this transkingdom interaction? If there is one definitive conclusion that can be drawn from these exciting developments, it is that more research is needed.

That is really difficult to answer! I feel like I have been unbelievably lucky to end up with amazing mentors and peers throughout my career. Deciding to go into food science and microbiology would be the best, as both communities are full of incredible people – I feel lucky to be a part of these scientific communities!

What is the most enjoyable part of your job?

So many things are enjoyable. I would have to say the daily interaction with the fantastic people in our field as well as getting to work on such interesting topics. Also poop jokes.