Modelling virus infections of the skin in 3D 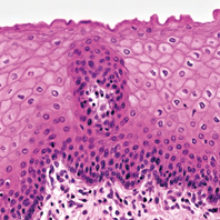 Using organotypic raft cultures to study the replication cycle of epithelial tropic viruses has given us revealing insights into the infection strategies and pathogenesis of clinically important viruses.

When we think of skin, we usually have in mind the skin covering the outside of our bodies, but our body cavities (e.g. anogenital tract, oesophagus) and some organs (e.g. tonsil) are also lined by skin or to be more precise – stratified squamous epithelium. Made up of multiple layers and constantly renewed throughout our lives, through a tightly regulated balance between cell proliferation and cell differentiation, our squamous epithelium performs many functions, but one of its major roles is to act as a barrier to micro-organism invasion.

The lower layer of the epithelium is referred to as the ‘basal’ cell layer and contains proliferating cells, including self-renewing stem cells, whereas the upper or ‘suprabasal’ layers are made up of differentiating cells (Fig. 1). Keratinocytes are the major constituent cells of squamous epithelium, but other cell types present include local antigen-presenting Langerhans cells and γδ T cells, both involved in immunological surveillance, mechanoreceptor Merkel cells, and melanocytes which give pigmentation and act to block UV irradiation.

The underneath of the epithelium is separated from the dermis, which harbours specialised structures such as hair follicles, sweat and sebaceous glands, and nerve endings by the basal lamina – a highly specialised extracellular matrix structure. Nourishment of the epithelium comes from the basal side by diffusion of nutrients and factors from the underlying dermis. At the onset of differentiation, the basal cells become detached from the basal lamina, stop proliferating and begin differentiation. As they travel upwards they become more differentiated until in skin they form a keratinised, highly differentiated layer that is continually sloughed off, or in ‘wet’ mucosa (e.g. the uterine cervix), a non-keratinised superficial layer – this process takes about two weeks to complete (Fig. 1).

Recapitulating the complex process of epithelial differentiation in a laboratory as a way of making ‘skin’ for treating burns was the ‘Holy Grail’ in skin research for many decades. One of the most important discoveries was being able to isolate and grow keratinocytes from skin on a feeder layer of mouse fibroblasts for several successive generations – the next big step was to get them to differentiate to form a physiological replica of the epithelium. Since squamous epithelia are surface tissues with their upper regions exposed to the outer/inner environment and nourished from the basal side, the isolated keratinocytes are grown on a plug of collagen (a scaffold) and the structure lifted to the air–medium surface supported by a metal grid or cell culture plastic insert (although originally the collagen plugs were floated on the media surface, probably leading to the ‘raft’ terminology), so that the underside of the plug is in contact with the tissue culture medium (Fig. 2). The collagen plug is embedded with fibroblasts (isolated from dermis or a mouse fibroblast cell line) and acts as a dermal equivalent mimicking to some degree the mesenchymal–epithelial interactions that occur in vivo. After about two weeks in organotypic raft culture the keratinocytes have formed into 3D structures of full thickness and fully differentiated epithelium, and accurately mimic the physiology of squamous epithelium.

Viruses that replicate in the skin

Even though the epithelium is a barrier to infection, a number of clinically important viruses replicate in our epithelia including both alpha- and gammaherpesviruses, human papillomaviruses (HPV), Merkel cell polyomavirus (MCPyV), and poxviruses. Notably, many of these viruses have been designated by the World Health Organization as carcinogens because infections are at risk of developing into cancer. For some viruses the keratinocyte is the target cell for their replication cycle, but skin keratinocytes might also act as the entry portal of various pathogenic arboviruses following a mosquito bite. For others there is some uncertainty surrounding the nature of target cells in the epithelium, and an example is MCPyV which causes aggressive and often lethal Merkel cell carcinoma (MCC), which are located in the basal layer of epithelia. Dermal fibroblasts have been shown to support productive MCPyV replication and are therefore proposed as the target cell, although no viral DNA has been detected in the dermis adjacent to virus-positive MCC – the debate is ongoing.

The alphaherpesviruses varicella zoster virus (VSV), which causes chicken pox, and the herpes simplex viruses (HSV) 1 and 2 associated with oral and genital herpes, enter the host via infection of the differentiating squamous epithelial cells and subsequently establish lifelong latency in the dorsal root ganglions. Reactivation of these viruses (VSV – shingles, HSV – recurrent genital herpes) can be problematic for the host and a high burden on healthcare facilities. Primary skin keratinocytes infected with virus following lifting to the air–liquid interface in organotypic raft culture supported replication and spread of these viruses. The 3D models have been used as a platform for screening of antivirals and several compounds that reduced replication and spread of these alphaherpesviruses have been identified.

The gammaherpesvirus Epstein–Barr Virus (EBV) is a common infection that establishes lifelong latency in B lymphocytes. EBV infection in the young is often asymptomatic but if infection is delayed until adolescence, can often manifest as infectious mononucleosis or glandular fever. Establishment of lifelong latency may lead to EBV-associated lymphoid and epithelial cancers. The route of infection of B cells was thought to occur by oral transmission via epithelial cells in the oropharynx, but evidence that EBV could undergo productive replication in epithelia was slight and infection studies using epithelial cells grown in monolayer cell culture only supported a latent EBV infection. Breakthrough came when primary oral keratinocytes grown as 3D rafts were efficiently infected with EBV and the virus underwent a full productive cycle. This EBV infection model showed that the infection of epithelial cells led to the efficient production of new progeny and this tropism was an integral part of EBV spread in the oropharynx. Likewise, a better understanding of the transmission of another herpesvirus, Kaposi sarcoma-associated herpes virus (KSHV), was gained from growing virus-infected tonsil keratinocytes in organotypic raft culture. KSHV is a significant pathogen in the immunocompromised, especially those infected with HIV, and infection is associated with Kaposi sarcoma and several other malignancies. Infected saliva was known to be the route of transmission but the source of the virus in the saliva was unclear. In the rafts, the KSHV lytic cycle was only initiated upon differentiation of the latently infected tonsil cells and newly assembled infectious particles accumulated in the mature epithelial regions; thus infected tonsils could shed new progeny into saliva.

The intimate relationship between human papillomaviruses and epithelial differentiation

The use of epithelium equivalents has been a revolutionary advancement in the study of HPV biology. HPV replication is restricted to keratinocytes and the production of infectious particles is exquisitely dependent upon their differentiation. Infection with the majority of HPV types (there are lots of them) results in benign warty lesions that are subsequently cleared by immune activation. But a small number of HPV types that infect the squamous epithelia of genital and oropharyngeal tracts are the cause of the majority of cervical cancers along with a substantial proportion of other anogenital and oropharyngeal cancers. The virus infects basal keratinocytes and proceeds to manipulate the keratinocyte as it moves up through the layers creating an environment conducive to the productive cycle of the virus.

The virus is dependent on the host cell to replicate and pushes the otherwise postmitotic differentiating keratinocytes back into cell cycle acquiring access to the cellular DNA synthesis machinery. Once the viral genome has been amplified, the delay in differentiation is lifted and the final stages of capsid production and virus assembly take place in the mature regions of the epithelium. This productive cycle can be recapitulated fully in keratinocytes isolated from anogenital and oropharyngeal tissues that harbour the circular HPV genome and grown in organotypic raft culture (Fig. 3). Significant insights into the molecular biology of the HPV life cycle and pathogenesis have come from the use of the 3D culture system.

The continuing development of organotypic raft cultures to enable high-throughput screening modalities will enhance the 3D epithelial models of virus infection and replication as platforms for screening antivirals and testing novel therapeutic compounds. Advancement in understanding viral pathogenesis will come from the incorporation of increasingly complex cellular components, e.g. immune cells, into the 3D models to more accurately mimic the site of virus replication.

Sally Roberts has built a research portfolio studying the molecular biology of human papillomaviruses and a centrepiece of her research is the use of physiological 3D epithelial models of the virus life cycle and virus-driven carcinogenesis. Sally is an associate editor of Virology Journal, and was a past member of the Microbiology Society’s Virology Division.

Joanna Parish has studied the molecular biology of HPV for over 20 years and has unravelled mechanisms of HPV genome replication, persistence and epigenetic control of virus transcription utilising 3D epithelial models of HPV infection. Joanna is an Editor of the Microbiology Society publication Journal of General Virology, and was a past member of the Microbiology Society’s Virology Division.

Sally: Over 15% of human cancers are known to have an infectious aetiology and there still may be more associations to discover. Studying these infectious agents not only helps us understand oncogenesis and aids the design of effective vaccine strategies, but also enlightens our knowledge of the basic molecular and cell biology of our cells.

Joanna: I have the privilege of working with some of the best academic minds to answer our own important questions about how viruses manipulate cells to cause cancer. My scientific networks are built from those working within my research group (undergraduates, graduates, postdoctoral scientists) to my local, national and international collaborations. I find this ‘team science’ approach rewarding on many levels.