The intestinal microbiota in health and disease

Humans coexist with more than 100 trillion micro-organisms, including bacteria, fungi, archaea, viruses and protozoa that reside in multiple sites of the body, including the skin, lungs and reproductive tract. Those with the highest density and diversity are found in the gastrointestinal (GI) tract (the intestinal microbiota) and make up the microbiome.

The collective genome of all the micro-organisms that reside in and on the human body encodes approximately 3.3 million genes, which is 100-fold greater than the human genome. Whereas approximately 99.9% of genes within the human genomes of two unrelated humans are identical, only 10–20% of genes within the microbiome are shared by two unrelated humans. This emphasises the importance of the microbiome in defining humans as individuals.

How do we acquire our microbiome?

Microbial colonisation begins during and soon after birth, with the mother being the principal source of microbial pioneers. Depending on mode of delivery, the infant’s initial intestinal microbiota will either resemble their mother’s vaginal microbiota, rich in Lactobacillus, or their mothers skin microbiota, rich in Streptococcus. Post-partum, the intestinal microbiota of the infant rapidly changes, increasing in diversity during the first two years, in association with infant feeding. Breast milk, which harbours hundreds of species of bacteria, provides infants with a source of beneficial and health promoting (probiotic) bacteria including Bifidobacteria and Lactobacilli. By contrast, formula-fed infants have a distinct intestinal microbiota, with fewer probiotic bacteria. Upon introduction of solid food, the intestinal microbiome starts to resemble that of an adult, becoming enriched in genes associated with vitamin biosynthesis and polysaccharide degradation.

How do we study the microbiome?

The intestinal microbiome makes an important contribution to maintaining human health, with alterations in its make-up and/or function (microbial dysbiosis) being associated with numerous diseases. However, to identify dysbiosis we first need to define a healthy intestinal microbiome. The development of DNA sequencing technologies has significantly advanced and accelerated our understanding of the intestinal (faecal) microbiota and, in particular, bacterial taxonomy using 16S rRNA based sequencing and the functional capability of the microbiota using whole-genome shotgun sequencing. These culture-independent sequencing methods achieve proportionate analysis of microbial abundances within a complex community of microbes, and the identification of ratios of bacterial families and genera. However, care must be taken when collecting, transporting, storing and processing (faecal) samples to preserve baseline microbial abundances. Some investigators have argued that this analysis should be combined with quantitative microbiome profiling, as microbial load can vary substantially between different samples from the same individual, and between individuals.

What influences the composition of a healthy microbiome?

Difficulties in defining a healthy intestinal microbiome extend beyond limitations of experimental techniques. Both the composition and the temporal stability of the intestinal microbiome are personalised and individual. Performing longitudinal studies on large cohorts, combined with data compilation of environmental, behavioural, genetic and anthropometric measures, enables the dynamics of the microbiota and major covariates of microbiome composition to be identified. Several large-scale microbiome projects, including the Human Microbiome Project, the Flemish Gut Flora Project, the Dutch LLDeep, and the American Gut Project, have identified major covariates that include age, gender, stool frequency and consistency, drug intake and dietary factors such as sugar intake. Among medications, proton pump inhibitors have a strong effect on the gut microbiome, as do antibiotics, metformin, statins and laxatives. Antibiotic-associated changes in the microbiome can extend well beyond course completion. Of note, these covariates together explain less than 20% of variation seen in healthy individuals’ microbial compositions.

How does the intestinal microbiome promote health?

The major contribution of the intestinal microbiota to maintaining human health is digestion and the processing of food and complex plant-based polysaccharides (fibre). The colon can be considered a large fermentation vessel in which microbes process dietary fibre and resistant starch to generate short-chain fatty acids (SCFAs). SCFAs are an important source of energy for intestinal epithelial cells and they promote local hormone and neurotransmitter production which influences GI motility and appetite control. The microbiome also provides its host with a source of essential vitamins and minerals, such as folates, vitamins K, B2 and B12, and biotin.

The microbiome promotes the development of both the immune and enteric nervous systems. Mice deficient in key microbial recognition receptors (i.e. toll-like receptors; TLRs) have reduced numbers of enteric neurons and experience defective intestinal motility. Sterile, germ-free mice are severely immunocompromised with defective development of gut-associated lymphoid tissues and antibody production, in addition to neurological and central nervous system (CNS) deficits. Microbial colonisation in early life promotes the development of the innate immune system and immune tolerance and contributes to host defence against pathogen infection through competitive exclusion and the production of antimicrobial proteins.

In addition to its local effects on intestinal health, the intestinal microbiome has an impact on other organ systems, including the brain, via the bidirectional gut–brain axis, which involves neural pathways as well as immune and endocrine mechanisms. The intestinal microbiome can exploit this axis to influence signalling within the CNS and modulates host behaviour via modification of autonomic sensorimotor connections, influencing the enteric neuroendocrine system by immune activation. Different bacteria within the microbiome are a source of immunomodulators and regulators of endocrine hormone action and can catabolise diet-derived amino acids to synthesise various neurotransmitters including GABA, serotonin, histamine and L-DOPA. Therefore, the microbiome can have an impact on motor control, learning, memory and emotion (primarily stress and depression). If microbiome alterations result in a loss of homeostasis of these systems, then diseases affecting mental health could ensue. 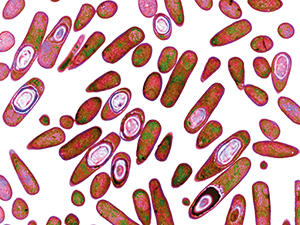 How does the microbiome influence disease?

Intestinal microbial dysbiosis and reduced diversity of bacterial, and increasingly viral, populations is associated with disorders affecting the GI-tract, liver, vasculature, lungs, joints and the brain. However, the majority of human microbiome–disease studies carried out to date are observational and associative providing limited insight into functional causation: cause vs effect of intestinal dysbiosis and disease aetiology is poorly understood. Animal studies can be utilised to explore intestinal dysbiosis and disease pathogenesis. For example, transplanting human faeces from obese patients into germ-free mice resulted in them becoming obese. However, differences in GI anatomy and physiology and in the microbiota of mice versus humans, in addition to obvious differences in lifestyle and behaviour, make it difficult to translate findings from animal studies directly to humans. Relating functionality of bacterial genus/species to the abundance alteration in disease states is another way of exploring intestinal dysbiosis on disease progression. For example, Faecalibacterium prausnitzii is a resident intestinal bacterium that possesses anti-inflammatory properties and is less abundant in patients with inflammatory bowel disease (IBD).

How do we treat microbial dysbiosis to restore health?

Targeting the intestinal microbiome as a therapeutic intervention strategy may be of benefit in diseases associated with intestinal microbial dysbiosis. Three approaches can be considered. First, administration of probiotic micro-organisms. Second, the consumption of prebiotics such as fructans, inulin, fructo-oligosaccharides, galacto-oligosaccharides and lactulose that support the growth of beneficial microbes. Third, wholesale microbiota replacement by faecal microbiota transplantation (FMT). FMT has proven to be a very effective treatment and cure for recalcitrant Clostridium difficile infection (rCDI) and is becoming an established treatment option within the NHS for rCDI. Beyond its use in treating chronic GI infections, several FMT clinical trials are underway exploring its potential use in other disease including IBD, irritable bowel syndrome and myalgic encephalomyelitis.

In summary, humans have evolved with their microbiome, establishing a mutualistic relationship in which the microbiome, in return for being provided a ‘home’, plays a central role in maintaining life-long health. Further research is now needed to define the nature and molecular basis of microbe–host interactions in the GI-tract and elsewhere, using complimentary culture-dependent and -independent approaches and technologies. Appropriate in vivo pre-clinical studies with subsequent human studies and clinical trials can then lead to the development of evidence-based interventions that target the microbiome to promote, maintain or restore health.

Obata Y, Pachnis V. The Effect of Microbiota and the Immune System on the Development and Organization of the Enteric Nervous System. Gastroenterology 2016;151:836.

Katharine Seton attained her bachelor’s degree in Biomedical Sciences at Newcastle University in 2016. She then moved to Norfolk to undertake a PhD. Her research aims to determine whether there is an abnormal immune response to the microbiota in myalgic encephalomyelitis/chronic fatigue syndrome (ME/CFS) patients.

Simon Carding is Professor of Mucosal Immunology at the University of East Anglia and leader of the Gut Biology Research Programme at the the Quadram Institute. His research focuses on understanding how gut microbes communicate with their host and the role that this cross-talk plays in establishing and maintaining health, and in diseases affecting the gut and other parts of the body, including the brain.

What do you see as your greatest achievement to date?

Katharine: Looking back, I believe my greatest achievement to date is having been driven and focused enough to complete an undergraduate degree, then undertaking a PhD, despite having myalgic encephalomyelitis/chronic fatigue syndrome (ME/CFS). In high school, I completed my GCSEs while attending school part-time and pursuing a career in academia seemed unattainable. It feels like a huge achievement to have gotten this far in my research career.

Simon: Having the opportunity to work with and mentor some very talented scientists and seeing them go on to establish successful careers both within and outside of science.

Katharine: As part of my PhD ‘Defining autoimmune aspects of Myalgic Encephalomyelitis/Chronic Fatigue Syndrome (ME/CFS)’, I am undertaking a human study which involves collecting samples from severe, housebound patients. Interaction with these patients is the most rewarding part of my job, as it enables me to appreciate first-hand the impact my research could have.

Simon: Working in an exciting and dynamic area of biomedical research that is never boring and is both challenging and rewarding.