Where bacterial metabolism and virulence intersect 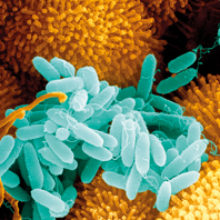 ‘We are what we eat’, and so are the bacteria that live on us. If bacteria do not have the building blocks or metabolic pathways and capacity to create their healthy cell, they will be disadvantaged when it comes to establishing an infection.

For example, an incomplete peptidoglycan or lipoppolysaccharide (in Gram-negative bacteria) would leave them weakened and more susceptible to harsh environments, the immune system or antimicrobials. Metabolism provides these building blocks, thereby contributing to pathogenicity via boosting cell fitness. Metabolism also generates the substrates (amino acids, sugars, etc.) for virulence factors (which are defined as macromolecules that contribute to infection severity).

It has long been known that bacteria produce macromolecules to scavenge for key molecules required for metabolism, such as iron. If acquisition or utilisation of these resources is impaired, so is their pathogenicity. This may be linked to survival in a certain niche, e.g. blood, or to accomplish a key stage in infection: for example, biofilm formation. Similarly, regulators integrated into nutrient acquisition also control virulence factors, such as the sigma factor linked to metabolism of nitrogen, RpoN or Fur (the ferric uptake regulator). Conversely, virulence regulators also exert regulatory control over metabolic pathways, e.g. EfpR in the plant pathogen Ralstonia solonacearum or regulators encoded on the Salmonella pathogenicity island 13 (SP-13). In these ways, virulence and metabolism are intimately linked, and this feeds into the ‘survival of the fittest’ theories of evolution.

Metabolic pathways can be co-opted as a virulence strategy

LuxS is a metabolic enzyme, central to the activated methyl cycle that converts S-ribosyl homocysteine to homocysteine, releasing 4,5-dihydroxy-2,3-pentadione (DPD). DPD cyclises spontaneously to generate autoinducer 2 (AI-2), that can serve as a temporally-released metabolite. Some bacteria do solely this, and uptake AI-2 in times of need to feed it back into metabolism. When luxS is disrupted, there is a reduction in fitness which can affect pathogenicity, for example, by curbing biofilm formation. Other bacteria have been able to exploit the AI-2 to count their population size, and use it to trigger a specific regulatory response when the population density reaches a critical size: i.e. quorum sensing (QS). If the QS regulon encompasses virulence factors, pathogenicity will be affected directly. 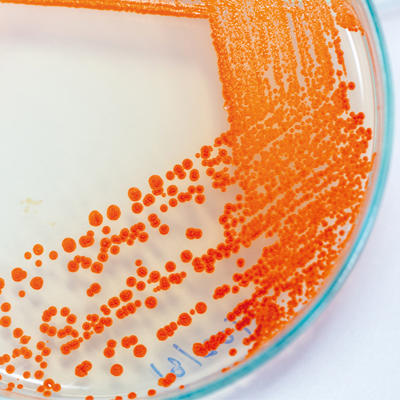 On the opposite side of the coin, the production of virulence factors draws on metabolism, and this fitness cost can impair pathogenicity. For example, capsule production and glucose metabolism collide in dictating virulence of Serratia marcescens. Unlike AI-2, other QS signal molecules (QSSMs) do not feed back into metabolism as directly, but are produced by dedicated synthases, with the goal of interacting with cognate regulators, e.g. N-acyl homoserine lactones (AHLs) and alkyl quinolones (AQs). QS dictates that QSSMs accumulate, thus their production is a drain on the metabolic pathways that are specific to the generation of the substrates from which they originate. The feeder metabolic pathways include amino acid and fatty acid synthesis, and when depleted there is a fitness burden that impacts upon virulence. This impact is serious enough for cheating bacteria (QS responders that do not make QSSMs) to exist in populations.

Not every bacterium plays fairly, leading to heterogeneity in populations that enables bacteria to progress infections under adverse conditions, e.g. non-producing cheaters benefit from the production of virulence factors made by other bacteria, but have a reserve in their metabolic bank if environmental conditions change. Likewise, relatively metabolically inert cells, such as persisters, are maintained to enable survival when slow growth is an advantage, where nutrients are scarce, for example, such as in the depths of a biofilm, or during the onslaught of antimicrobials.

Some pathogens have evolved to make the best of heterogeneous metabolisms in a population by cross-feeding. Cross-feeding is evident within the complex biofilm communities of plaque in the oral cavity where Streptococcus gondii depends on the keystone pathogen Porphyromonas ginivalis generating 4-aminobenzoate/para-amino benzoic acid (pABA) for folate biosynthesis. Marvin Whiteley’s group demonstrated this co-dependence extended beyond nutrient provision to the promotion of respiratory growth of a pathogen by a commensal that enhanced virulence. This is likely to have implications in polymicrobial infections such as those found in wounds.

Some virulence factors can provide nutrients that provide a fitness advantage. For example, the surface-tethered aminopeptidase autotransporter of Pseudomonas aeruginosa, AaaA, can generate arginine locally that can be metabolised by the bacteria, and could be a strategy to survive in environments with limited oxygen, such as within a biofilm microcolony.

A metabolic switch can turn a commensal into a pathogen

The nasopharyngeal commensal Streptococcus pneumoniae colonises 65% of individuals. Bacteria from this reservoir can invade the lungs to cause pneumonia, the blood to cause bacteremia, the central nervous system to cause meningitis or ascend the eustachian tube to the middle ear and cause otitis media. Virulence factor switches, for capsule serotype for example, contribute to infection progression by enabling pathogens to survive in different niches. Minhas et al. reported that altering uptake and utilisation of the trisaccharide raffinose may be the ultimate determinant controlling whether a S. pneumoniae infection is established in the blood or the ear, with clinical isolates from the blood utilising raffinose more efficiently. Interestingly, this highlights how differential carbohydrate metabolism not only alters virulence, but can even impact on the disease caused. Whether the underlying mechanism of the raffinose uptake is linked directly to metabolic status of the bacteria is not entirely clear. It is possible that different host niches have altered sugar availability which influences the need to metabolise raffinose and gain a fitness advantage. It is also possible that depleting the raffinose concentration may alter aggregation and biofilm potential as a virulence strategy.

A metabolic pathogenic strategy that disadvantages the microflora

Salmonella Typhimurium uses one pathogenicity island (SPI-1) to encode a type 3 secretion system (T3SS-1) to promote inflammation in the intestinal tract. The inflammation initiates production of tetrathionate and ethanolamine which can be utilised by the S. Typhimurium to trigger rapid expansion of the pathogen at the expense of the commensals.

The interplay between virulence and metabolism is complex, and searching the literature for relevant information is plagued by non-specific terms. However, it is apparent that the two are linked, although it is difficult to define the boundaries between the two. Is a metabolic enzyme/regulator that provides a cell with a fitness advantage during an infection a virulence factor? Is a virulence factor that provides a metabolite better defined as a metabolic pathway component? Current technology platforms are developing fast, and ultimately we will be able to analyse the metabolome and virulence factors simultaneously in single cells in a population. This may perhaps be possible in real time using secondary ion mass spectrometry (SIMS) imaging such as ORBI-SIMS and Nano-SIMS, and Raman coupled to confocal microscopy or fluorescence in situ hybridisation (FISH) which will help us decipher these conundrums.

Davis KM, Isberg RR. One for All, but Not All for One: Social Behavior during Bacterial Diseases. Trends Microbiol 2019;27:64–74.

Kim Hardie studied for a BSc in Biological Sciences, before completing a PhD investigating Escherichia coli haemolysin. She has since worked in postdoctoral positions at the University of Victoria, Canada, and the Institut Pasteur, Paris. Her research at the University of Nottingham has focused on autotransporters, quorum sensing, biofilms and AMR complements, and she holds governance roles within the Microbiology Society and Royal Society of Biology.

What does a typical week involve for you?

A typical week is working 8:00–18:00 on a mixture of research supervision meetings, lectures and workshops for students. It also involves pastoral support and mentoring, interactions with external academics and also far too much admin. Most evenings involve an hour or so on the computer and spending time with my two daughters and husband. For a treat, I cook something special, go to the gym, knit or read a novel. Most weeks involve at least one IT annoyance and if I’m lucky there will be a trip somewhere to examine, plan research, hear science or get involved with external governance.

The fascination to understand how bacteria, which are so small and single-celled, can do almost everything a whole organism can do. Microbiology is pure systems biology without even trying, and the ideal component of multidisciplinary science. Most importantly, bacteria do not bleed, so they don’t make me squeamish, and they are easier to grow than plants.