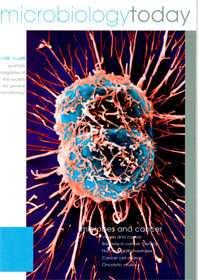 The lead articles of the August 2005 issue of Microbiology Today are on viruses and cancer; bacteria in cancer therapy; human papillomaviruses; cancer cell division; and oncolytic viruses.

An introduction to viruses and cancer (p. 110)

Cancer is a major killer. Dorothy Crawford discusses how viruses are involved in 10-20% of all human cases of this disease.

Papillomaviruses cause a range of cancers, but as Julie Burns and Norman Maitland reveal, help is at hand in the form of effective vaccines.

Pieter Gouws reports on the effect of PCR inhibitors in complex food samples.

Iain Hagan and Paul Nurse discuss how, in the fight against cancer, microbes are showing the way to our understanding of the control of cell division.

Microbiology in the Regions report (p. 127)

Mike Challen and John Thomas report on the Basidio conference in April, which focused on the biology of basidiomycete fungi.

Many scientists fled the Nazis in the run up to WWII. Michael Carlile talks about how two of them made great contributions to UK microbiology.

Discover the new resources created and events organised by the Society. Dariel Burdass reflects on the latest MISAC competition, entitled Fungi in your shopping basket.

The Society, represented by Dariel Burdass and Janet Hurst, brought microbiology to the RHS Chelsea Flower Show this year, where gardening enthusiasts were keen to learn more. Sue Assinder reports on the 7th Wrexham Science Festival in March.

We are sad to announce the deaths of former President Ernest Frederick Gale FRS and former Council member Carlos Hormaeche.

Howard Gest questions if astrobiology is really a science - does it involve micro-organisms?