A matter of taste: using microbes to influence flavour production 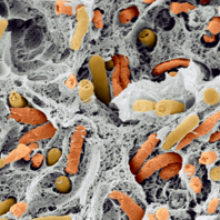 Flavour is a major component of the sensory characteristics of food and drink, and is integral to the choice of what we consume. The development of flavour is a multifaceted process as it depends on the combination of ingredients used in a product and how our sensory perception of these delivers our flavour experience.

Flavour components can include non-volatile compounds which are detected by taste and aroma volatiles which are detected by smell; the combination of these develop the full flavour experience. Some of these compounds are intrinsic to the key ingredients but, for certain food products, the involvement of micro-organisms is essential in producing their characteristic flavours and can deliver complexity and variety.

The diversity of products that involve micro-organisms in their production is high. Obvious everyday examples such a bread, yogurt, cheese, salami, wine and beer are well recognised as fermented products, as are products such as kimchi, sauerkraut and kefir, but chocolate, coffee, tea and olives also require the involvement of micro-organisms in their production. Internationally there are many fermented dairy, cereal, meat and vegetable products eaten as an everyday staple, many of which are indigenous to that country and produced traditionally at the household level by natural fermentation. Typical examples of this are ogi, a naturally fermented maize or sorghum product from Nigeria, gari, a fermented cassava product made across West Africa, and Pliek U, a naturally fermented grated coconut which is usually used as food seasoning in Aceh, Indonesia. Micro-organisms change the texture and nutritional properties of the base material and are a major contributor to the development of flavour. There are some foods which are just micro-organisms: well-known brands of mycoprotein and yeast extract are household names.

Flavour compounds develop when micro-organisms grow and their enzymes break down the components of the basal materials such as carbohydrates, proteins and lipids. The end products of metabolism can be elements such as amino acids, fatty acids and nucleotides, which impart particular flavour characteristics. For example, hydrophobic amino acids (e.g. phenylalanine, leucine, isoleucine, methionine) produced by the action of proteolytic enzymes on the milk protein casein result in bitterness. However, further metabolism of these can result in a diversity of flavour/aroma compounds: these can be sulphurous/cabbagey as produced from the conversion of phenylalanine to methanethiol; sweet honey-like, which results when phenylacetic acid is produced from phenylalanine; and fruity/banana/malty characteristics produced by the conversion of leucine to isovaleric acid, 3-methyl-1-butanol or 3-methyl butanal, respectively. The breakdown of sugars (e.g. lactose) typically results in organic acid end products which produce sour notes but also alcohols and diacetyl, which gives a buttery aroma, or acetoin which gives a fruity flavour. Methyl ketones and their associated secondary alcohols are produced from fatty acids and give ‘blue notes’ to cheeses. All of these characteristics have been described in blue cheeses and while individually they may not always sound appealing, in combination, these give products their desired characteristics. For example, the production of the three volatile sulphur compounds methanethiol, dimethyl disulphide and dimethyl trisulphide are related to a desirable flavour in Cheddar cheese.

The composition of the microbial population

Which flavour/aroma compounds are produced and in what quantities is thus dependent not only on the composition of the food but also on the composition of the microbial population. Each micro-organism produces characteristic end products of metabolism, but these may then be used in turn by other micro-organisms, which results in further end products. The conditions of production determine the extent to which particular groups will continue to metabolise and produce their associated end products. In natural fermentations, the fermentation relies on the indigenous micro-organisms introduced by the components, but this can result in poor product quality or even production failure if the right species are not present to impart a particular desirable characteristic. ‘Back slopping’ (using a fermented product as an inoculum) can overcome this but can also perpetuate undesirable groups. The use of commercially produced starter cultures with known metabolic characteristics to initiate fermentations is widespread, and bacteria, yeasts and moulds are widely used in the food and beverage fermentation industries. These make a more uniform product but may not always be the key species influencing flavour generation.

Lactic acid bacteria such as Lactococcus lactis and Lactobacillus are an important group of bacteria used in the dairy, fermented meat and fermented vegetable industries. These produce lactic acid as an end product from glucose but, depending on the subspecies of L. lactis or species of Lactobacillus, other end products contributing to flavour can arise such as ethanol, diacetyl and acetoin. In some products, specific species are used together to produce desirable product characteristics. In yogurt, Streptococcus thermophilus and Lactobacillus bulgaricus are inoculated together. Both produce lactic acid, but together this is improved in comparison to each alone as the Lactobacillus liberates valine through proteolysis, which stimulates growth of the streptococci, and the Streptococcus produces formate needed by the lactobacilli. Acetaldehyde and diacetyl are the important flavour volatiles produced giving the typical yogurt flavour, with the Lactobacillus being the primary producer of the former. The absence of an enzyme (alcohol dehydrogenase) in both species, which would convert the acetaldehyde to ethanol, means the final product is yogurt flavoured rather than being alcoholic! 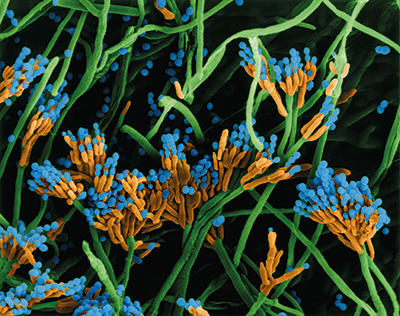 In fermented meats like salami, Staphylococcus carnosus and Staphylococcus xylosus are often added with the lactic acid-producing starter culture. Unusually, these organisms are not very acid tolerant and so do not grow once the pH starts to drop. However, the enzymes they produce are more tolerant and so essentially the bacteria act as bags of enzymes which contribute to fat and protein breakdown, and hence the production of flavour compounds.

The other main groups important in flavour production are yeasts and moulds. Yeasts are of course well known for their alcohol production, but the proteolytic and lipolytic activities of particular species produce a range of flavour compounds. The yeast Yarrowia lipolytica breaks down tributyrin, resulting in butanoic acid which has a cheese-like odour, and this is believed to be an important part of the flavour development in a number of cheese varieties. Moulds similarly have proteolytic and lipolytic activity which impart particular characteristics; Penicillium roqueforti gives the ‘blue’ flavour characteristics to cheeses like Stilton and Roquefort.

Cheeses are a good example of a product where the development of sensory characteristics is very dependent on the balance of micro-organisms present. Following the initial fermentation by a starter culture, cheeses undergo a ripening period, the length of which varies with cheese variety. It is during this period that cheeses become complex dynamic ecosystems with the growth of a variety of different micro-organisms contributing to the product’s flavour development. For example, in Stilton cheese, Lactococcus lactis and P. roqueforti are the two starters added by the manufacturer but the final microbiota of a mature cheese after 12 weeks contains many other bacteria and yeasts, some of which have been shown to influence flavour characteristics. As indicated above, Penicillium is added to allow development of typical blue cheese flavours, mainly through the production of methyl ketones. In model cheese studies using controlled flora composition, the inclusion of Y. lipolytica with P. roqueforti has been shown to increase the development of blue cheese aroma through an increased production of ketones, in comparison to using P. roqueforti alone, and resulted in sensory characteristics equivalent to a mature cheese which the mould alone did not. This may result from the yeast’s highly lipolytic activity releasing free fatty acids which the mould could then convert to ketones. Thus, the full product characteristics desired by the consumer may rely on this yeast being present. However, this is a species which is present only through chance introduction during processing and hence its presence could be variable from batch to batch, leading to variability in the product.

Many micro-organisms are thus beneficial in contributing to the production of flavour characteristics in many products we consume. However, it should always be remembered that context is key; diacetyl production in dairy products is desirable: in beer it is an off-flavour! One producer’s starter culture is another’s spoilage agent. That well-known yeast extract product effect!

Christine Dodd joined the University of Nottingham in 1985 as a postdoctoral researcher and was awarded the Chair in Food Microbiology in 2007. She works on various areas in food microbiology including transfer of pathogens and antimicrobial resistance in the food chain and the contribution of non-starter micro-organisms to food fermentations.

Dewi Yunita has worked in Syiah Kuala University, Banda Aceh, Indonesia since 2006. She completed her MRes (2008–2010) and PhD (2011–2016) at the University of Nottingham, UK. Her PhD research was about microbial dynamics of raw-milk cheese ripening. Now, her research projects focus on fermentation of coconut, cacao and coffee beans.

Christine: My advice to new research students would be to join one or more of the learned societies associated with microbiology, and to engage in the opportunities for receiving funding, attending conferences and networking which being a member affords.

Dewi: I strongly agree with Christine for this question. That’s what I did when I was a student at the University of Nottingham. I got funding from this Society when I attended a conference in Torino, Italy in 2013. Thanks! Subscribing or following societies on social media is also important to keep us up-to-date with any news or hot issues related to microbiology around the world.

On a typical day (week) in your position, what do you do?

Christine: I am now working only one day a week for the university, and so my day is very structured to delivering the teaching needed for that day, preparing lectures for the following week and getting updates on my shared research.

Dewi: I work five days a week full time for Syiah Kuala University as a head of the Food and Industrial Microbiology Laboratory. My main duties are teaching, conducting research and delivering knowledge to community services. Currently, I am involved in organising committees for the Annual International Conference of the University. I am also one of the editors of a scientific journal for the students.