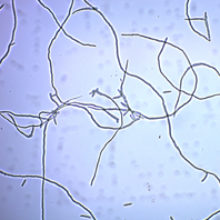 Global consumption of protein is driving many of the major changes that we see in land use throughout the globe. We now produce somewhere between four to five times more meat than we did just 50 years ago, and in order to feed livestock, production of protein-rich pulses, such as soy, have also grown by about 10-fold in the same time, to a current high of 300 million tonnes per year.

As well as being responsible for about 14% of total human-associated greenhouse gas emissions, animals are responsible for 40% of global methane production and 65% of nitrous oxide. The inevitable conclusion, re-iterated only a couple of months ago by the United Nations’ Food and Agriculture Organization (FAO) director general José Graziano da Silva, is that we must reduce meat consumption and in turn reduce global demand for animals and animal feed. Only 65 years ago, the FAO were grappling with the opposite problem, an impending predicted global shortage of protein foods and the spectre of malnutrition. Ironically, the solution proposed then, may be the same as it is now: alternative low-carbon protein derived from fungi.

The development of mycoprotein is a fascinating story; having decided that there was a need for a protein source, the British company Rank Hovis McDougall (RHM) set about screening thousands of strains of fungus for their suitability for growth on glucose, finally hitting upon Fusarium venenatum. After 15 years of research, partnering with Imperial Chemical Industries (ICI) to scale fermentation, approval was given in 1984 by the UK Government for sale as a food by the newly formed Marlow Foods. The total investment was over £1 billion in current terms and progressed even after a few false starts had to be abandoned. Mycoprotein was first sold under the brand name Quorn™ in 1985, in the form of a savoury pie by Sainsbury’s. The company is now worth over £500 million (part of the Filipino company Monde Nissin), sells Quorn™ in 19 countries and aims to be a billion dollar business within 10 years.

At the same time as Quorn™ was being developed, RHM and ICI were also developing another single-celled protein for animal feed, Pruteen™. Pruteen™ was made from Methylophilus methylotrophus, an aerobic organism that was fed methanol in one of the largest fermenters that has ever been built, at over 1,500 tons working volume. The 80-metre high fermenter dominated the skyline at Billingham in Teesside, along with the associated cooling tower for a few years in the mid 1980s, before being demolished as the rise in oil prices and increased efficiency of traditional farming made it uncompetitive.

Throughout its history, the development of Quorn™ has always drawn heavily on microbiologists in the university sector. Perhaps the most fundamental insights into the biology of F. venenatum have been gained through the work of Marilyn Weibe, Geoff Robson, Steve Oliver and Tony Trinci in the 1990s, while in Manchester. Moving into the post-genomic era, work is now taking place at National Institute of Agricultural Botany (NIAB), University of Nottingham and Northumbria University into the growth and metabolism of F. venenatum at the molecular level, in research supported by Biotechnology and Biological Sciences Research Council (BBSRC), Innovate UK (NIAB), and Marlow Foods directly (University of Nottingham and Northumbria University).

The towers containing the Quorn™ fermenters stand over 40 m high, and the fermenters themselves are over 30 m high within the towers. The fermentation process is a pressure cycle airlift, where the entire circulation is caused by the differential density between the aerated medium in the main body of the fermenter and the higher density, unaerated medium in a return pipe. No impellers are used, making these 150,000 l fermenters remarkably energy efficient. The medium used is a minimal salts medium using high purity – almost research grade – salts, pure glucose and ammonia fed in through the airline. Small amounts of biotin and choline are added to aid growth and morphology. The fermentations are continuous, running for about a month before the accumulation of short, hyperbranched mutants affects the quality to the point that the process must be stopped and restarted. The broth is heat treated as it leaves the fermenter to reduce the RNA content. It is then pasteurised and the liquid is removed by centrifugation, leaving a paste that resembles bread dough.

The paste from the fermentation is mixed with a protein (usually egg white) to align the hyphae and cross link them. Flavourings are also included at this stage. The mixed paste is then heated to set the dough into a solid billet, which is then cooled, cut into shapes or minced and then frozen. The freezing allows ice crystals to form that force the hyphae into bundles that closely resemble the fibres seen in muscle. 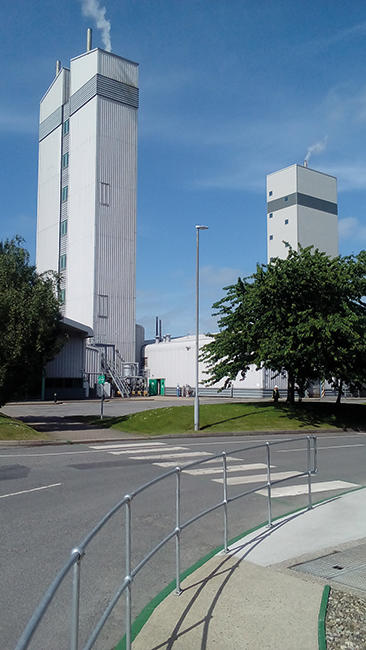 There are a number of different greenhouse gases, but greenhouse gas footprints tend to be expressed as carbon dioxide equivalent (CO2e); this is known as the carbon footprint. Mycoprotein production produces 1.14 kg CO2e per kg, a finished product e.g. Quorn Mince™ = 1.72 kg CO2e per kg at the factory gate. This is lower than the most intensively produced broiler chicken (at 2.4 kg CO2e) and is clearly below the lower end of the spectrum of animal-derived protein sources (beef can be anywhere between 12 and 60 kg CO2e depending upon how and where it is produced).  The water footprint of mycoprotein is around one tenth of that of beef and around half that of chicken, taking about 2,000 kg to produce 1 kg of protein. This is still high in comparison to plant-based protein and work is underway to reduce this significantly, through reuse of water in production.

Feed conversion ratios are also favourable, with under 2 kg of wheat needed to produce 1 kg of mycoprotein – in comparison to beef (taking 12– 24 kg). Because of the fermentation process, Quorn™ contains more protein than there was in the original grain, unlike animal proteins which can only concentrate what was in the grain (with some losses).

Over the years, a significant amount of work has been done on the health benefits of Quorn™ mycoprotein. Research has shown that it aids satiety, can help control blood sugar levels by increasing sensitivity to insulin and can reduce blood lipids. It has been shown to aid gut health and current research indicates that it is a good source of anabolic protein.

Some of the key future targets for production of mycoprotein aim to turn the production process into a more cyclical one, utilising waste water and reusing some of the waste streams (such as the ‘broth’ left over from fermentation). These waste sources have the potential to be of some value, as well as reducing the ecological footprint of mycoprotein.

One key target for future research is the use of alternative carbon sources. Currently, production relies on wheat-derived glucose, which is plentiful in the UK. However, looking beyond this into other sources of carbohydrate, there may be opportunities to develop new recipes for fermentation using either plentiful carbon sources or indeed other waste streams such as lignocellulose. The diversity harboured within the population of F. venenatum has not yet been explored and may offer some significant potential for novel bioprocesses that are not present within the current production strain. Ongoing BBSRC-funded research at NIAB is beginning to explore some aspects of this challenge.

Finally, if fermentations could be carried on for longer, the overall energy required to produce mycoprotein would decrease. Some ongoing work at NIAB is investigating the genetic basis of a ‘colonial variant’– a short-branched mutation of the production strain that arises during fermentation. This is one of the primary barriers to continuous production. Understanding the genetic basis of the means by which this arises may allow work-arounds to be designed into the production process, allowing operational costs to be lowered.

Taken together, the evidence suggests that with the combination of shifting dietary habits in the under-25s towards a flexitarian or vegetarian diet, the lower carbon and water footprints and the huge potential to further refine production, mycoprotein could well be a part of the transition to a more sustainable and circular economy and, while never replacing the role of animals in our diet, it may offer a palatable, clean and green alternative for many.

This article is dedicated to Geoff Robson, who passed away suddenly in May 2018. Our condolences are with his family, his many colleagues and friends.

Richard Harrison leads the Genetics, Genomics and Breeding department at NIAB EMR and is supported by BBSRC through BB/P020364/1.

Richard: Microbiology is a fascinating and diverse area of research, which can lead in many different directions, so it’s very hard to give specific advice. If you are interested in gaining an enhanced microbiology ‘experience’ at the undergraduate level, try to combine microbiology and molecular biology modules with some more quantitative modules, such as metabolic modelling and informatics, and try not to specialise only on human-associated microbes. If you’re looking for PhDs in the area of industrial biotechnology with microbes, again try to select an institution with a great track record (University of Nottingham, Imperial College London and The University of Manchester are all strong in this area) at which you can learn both the molecular biology skills and the modelling/informatics that’s needed for most cutting-edge research. Joining a society often allows you to mingle with relevant industries as well as other academics; after all, two-thirds of postgraduates go into industry.

Richard: By far the most rewarding parts of the job are discovering new biological phenomena (and sharing them with the research community) and getting work out into practice. Both these elements of my work are what keep me going, despite the struggles of the funding cycles and the general daily grind. I am a firm believer in the fact that you can do high-quality curiosity-driven research with the dual aim of getting work into practice and advancing the field. If you can manage both simultaneously, then it’s twice the reward!

The towers containing the Quorn™ fermenters, two in the tower on the left and one in the right. Marlow Foods Ltd.