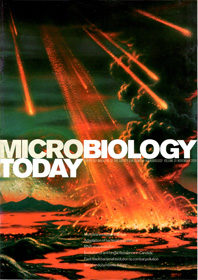 The lead articles of the November 2004 issue of Microbiology Today are on microbial evolution in action; adaptation of bacterial populations; RNA virus evolution; evolution of anti-fungal resistance in Candida; fast-track bacterial evolution to combat pollution; and serial endosymbiotic theory.

Richard Lenski describes his own research into E.coli populations and puts the other articles into context.

Bacterial populations adapt - genetically, by natural selection - even in the lab! (p. 160)

Microbes are constantly adapting to their environment. In this thought-provokin article, Paul Rainey describes the results of his studies on cultures of Pseudomonoas fluorescens which confound many preconceptions commonly held by microbiologists.

RNA viruses are characterised by a remarkable capacity to adapt to new environments, new seleection pressures and new hosts when opportunity arises. Peter Simmonds describes the evolutionary activities of these amazing life-forms.

The evolution of antifungal resistance in Candida species (p. 166)

The problems of antifungal resistance are different from those of antibacterial resistance. Frank Odds describes aspects of the evolution of resistance to antifungals by Candida albicans, a major opportunistic pathogen.

Bacteria can evolve incredibly fast to degrade new synthetic compounds such as dyes or solvents. Peter Williams explains the role of catabolic plasmids in this process.

Distinguished evolution expert and writer Lynn Margulis discusses the serial endosymbiotic theory of the transition from bacteria to eukaryotes.

The Society speaks to Tracy Palmer about a job in a research institute. Faye Jones reports about the Sense About Science event in September.

Editor Gavin Thomas describes some of the available resources to support the teaching of evolution. Dariel Burdass gives a timeline of the evolution of microbes.

The public is constantly confused by the mixed messages they receive from scientists about controversial issues. Tracey Brown argues that if the practice of peer review was promoted and understood, then people would find it much easier to reach a balanced judgement.