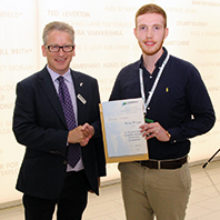 Each year the Society hosts a Showcase event before our Annual General Meeting for members of our Early Career Microbiologists’ Forum Executive Committee, Society Champions, Young Microbiologist of the Year finalists and Annual Conference poster prize winners. The event provides an opportunity for the Society to acknowledge the excellent work of our early career members and aid their professional development.

This year the Showcase presented a speed networking session which gave our guests the opportunity to network with exceptional professionals from a wide variety of backgrounds, who started their career with an undergraduate degree in microbiology.

The opportunity to network is a key benefit of membership of the Society. The speed networking session gave our early career members the chance to delve into the career paths of other microbiologists who have gone on to work in a number of industries. These guests were: Reagan Blyth, Director of Service Modelling, Research and Innovation, Pennine Care NHS Foundation Trust; Ariel Blocker, Reader in Microbiology, University of Bristol; David Grainger, Professor at the University of Birmingham; Jo Marchant, award-winning freelance journalist; and Peter Cotgreave, Chief Executive at the Microbiology Society.

Guests were then invited to view posters from the Annual Conference poster prize winners during lunch before proceeding to the Sir Howard Dalton Young Microbiologist of the Year (YMOY) Competition finals. 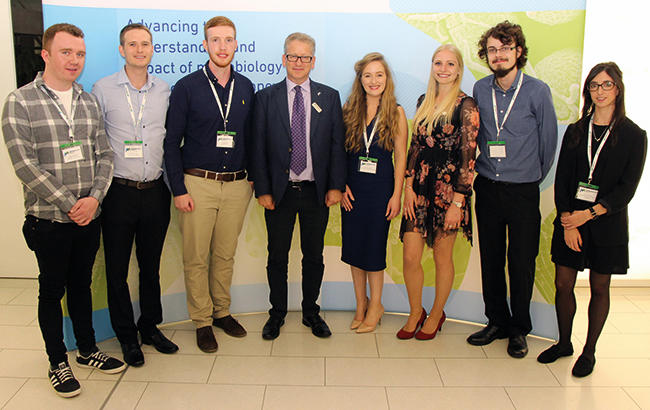 From over 600 abstracts at the Annual Conference alone, the finalists were narrowed down to seven outstanding early career microbiologists who presented their research to members and a judging panel made up of representatives from our four Divisions. The quality of all seven presentations was outstanding, and the winners were announced at a reception at the Royal College of General Practitioners that night. Congratulations to Daniel Hurdiss, from the University of Leeds, for his first prize presentation ‘High-resolution cryo-EM as a tool to study virion assembly and cellular entry of BK polyomavirus, a major cause of kidney transplant rejection’, and to second and third prize winners Andrew O’Connor, University College Dublin, and Rebecca Hall, University of York.

On winning first place, Daniel said: ‘I feel honoured to have been chosen as the winner of this year’s YMOY competition, especially given the calibre of the other finalists. It’s a nice feeling to present your work to an audience with such a broad scientific background and receive this kind of recognition in return. I’d like to thank the Microbiology Society, not only for this prestigious award but for their support to present at the Annual Conferences over the last few years. Without these opportunities, I wouldn’t be the confident public speaker I am today.’

Brexit is perhaps the most important political event to affect the UK science community in living memory. But while Brexit is big for science, science is only one small element of Brexit, which is set to be a massive, unwieldy and uncharted long-term process. At the AGM we included a debate on the topic to provide a forum for attendees.

What has been clear from discussions with members is that the Microbiology Society cannot just ignore Brexit. Our job is to support your careers in microbiology by connecting and empowering communities, and if this process will have an impact on your working lives, the Society must find constructive ways of helping.

So at the Annual General Meeting, Maggie Smith, the General Secretary, chaired a discussion about the process of Brexit and how it might affect the lives of microbiologists. Importantly, this does not just mean in the UK but also members in Ireland, where the Society has a strong and vibrant membership who may be affected by Brexit in different ways from their British colleagues. We were joined for the discussion by two people intimately involved in influencing how the Brexit process will affect science. Professor Graeme Reid, Chair of the Campaign for Science & Engineering, is a member of the Government’s High Level Forum on Science and Brexit. Professor Nick Talbot, a mycologist from the University of Exeter, sits on the Russell Group’s Europe Advisory Group, which is in direct contact with the Brexit negotiators both from the UK side and the EU side.

What emerged from the discussion is that while there is no doubt that the scientific community did not want Brexit, we have to find the most constructive ways to get the best possible outcome for UK research and development now that it is happening. And there is some hope in the fact that the UK Government has published a paper expressing a desire for “an ambitious science and innovation agreement with the EU”. While the document may seem a little thin and vague to scientists used to hard evidence and detailed argument, our guests reminded us that we are not the main audience. In a wide and sometimes acrimonious political process, the mere existence of a document saying these positive words is reason to hope and to engage.

There was a strong sense from the discussion that we will have the biggest impact where we make common cause with other communities who have common interests, not just the British research community. Examples include the City of London, the veterinary community, and importantly our colleagues in other EU countries. When the House of Lords surveyed what the other 27 EU member states were saying about Brexit, only one – Ireland – said it was worried about research collaboration. But we know that our collaborators in many European countries are nervous about the impact of the UK being left out of future projects. One thing we can do is ask them to make sure their own politicians know this.

The Society’s Policy Committee will now build on the discussion and work out what the Society can do in a practical way to maximise the chances of the most positive outcomes for the membership. One part of that process will be to identify those groups and communities with whom we might make common cause. It would be enormously helpful if members could let us know of areas where your work intersects with other communities who might want to join forces and work together to help get the best Brexit deal for science and for microbiology.