Managing the myths – the CSI effect in forensic science 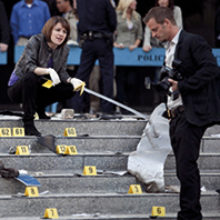 The tall, athletic man arrives at the crime scene with his beautiful, intelligent female lab assistant. Her hair flows and her heels are precarious. She waves a magic fluorescent stick and hey presto, it’s a complete match! The DNA found on the victim’s neck is a 100% match with that of the prime suspect, the victim’s husband. They immediately interview the suspect at the scene and manage to get a confession, not only to that bloody murder, but to ten others… “So you want to find another victim?” They drive off in their black, ‘top-of-the-range’ off-roader, with the suspect in the back seat, to visit the next gory scene.

Get the picture? Yes, far removed from anything we have ever experienced as forensic scientists at home or abroad. Unlike the CSI portrayal of scientists examining crime scenes in designer top, jeans and shades, personal protective equipment must always be worn at a scene. In the real world, disposable coveralls, gloves, mask, mob cap or hood, and booties are worn. Not glamorous, but they minimise contamination by the scientist (who might otherwise inadvertently deposit their own DNA and trace evidence), and protect the scientist from the risks of infected body fluids and other hazardous materials at the scene. However, such misrepresentations are perhaps relatively trivial when one considers the other ways in which televised crime dramas can influence public perception of forensic science.

With a rapid rise of interest in crime dramas all across the world, there runs the risk of false expectation amongst the general population as to what forensic science can actually deliver. In adversarial systems such as in the USA and the UK, where juries are key to the process of deciding guilt, it is vitally important that when an expert witness presents his/her evidence in court, that there is an understanding of what is truly meant by the data presented and what is meant by the expert opinions conveyed.

Forensic science is the application of science to both criminal and civil law. In the context of criminal investigation, it is governed by the legal standards of admissible evidence and criminal procedure. 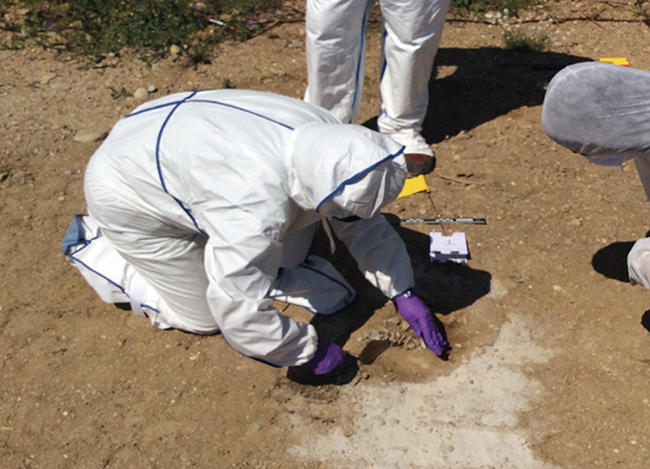 In addition to the on-the-scene and lab roles, forensic scientists also testify as expert witnesses in both criminal and civil cases and can work for either the prosecution or the defence. Theoretically, any subject can be ‘forensic’, although the main evidence types used are: biology (identification and attribution of body fluids and blood pattern analysis); chemistry (analysis and comparison of trace material such as glass and paint, and comparison of footwear marks); fibre and hair identification and comparison; analysis of illicit drugs of abuse; toxicology (the detection and analysis of toxic substances in body fluids and tissues); and fingerprints. The investigation of serious crimes, such as murders and rapes, can also involve the wider complementary forensic ‘ologies’ such as pedology (study of soil science), geology (study of the Earth’s structure and surface), taphonomy (study of decay and fossilisation), palynology (study of pollen grains and spores), and entomology (study of insects). Bacteriology and virology can also have their increasingly important part to play. Forensic microbiology has recently emerged as a separate discipline, using a range of tools from specific culture methodology to whole genome sequencing (molecular techniques used for detecting the microbes’ genetic material).

Just a few centuries ago, the very idea that living matter, invisible to the naked eye, even existed was almost science fiction. Today, microbiology is at the forefront of human health and counter-terrorism. Forensic microbiologists study genes, pathogens and contagions in a never-ending fight to keep people safe and to track-down those who could bring harm. Forensic microbiology is the study of micro-organisms in a forensic context and can be used in order to determine the path of an outbreak, the identity of a criminal, or the origin of a particular strain of biological weapon or contagion. Forensic microbiologists also work below the visible world to find biological markers hidden in the DNA of all living matter. These markers, known as ‘microsatellites’, identify patterns in DNA that help in many ways, from establishing the person responsible for a sexual offence to establishing the direct link between two seemingly dissimilar outbreaks of food poisoning in different parts of the world.

Very little scientific evidence is categorical, and only very rarely can forensic science identify evidential material with absolute certainty, or can compare and ‘match’ two samples to the exclusion of all other possibilities. Unless a particular object splits apart at the scene, with one half remaining behind and the other half transferred to the perpetrator, there will be uncertainty associated with any comparison and inference about the source of the item.

Whilst CSI programmes typically focus on evidence recovery at the crime scene and the subsequent analytical identification and unique ‘match’ to a comparison sample, in the real forensic world the evidential material is frequently minute, decomposed or damaged. All of which limit the capacity to undertake unlimited analyses, consequently the information gleaned from analysis is frequently incomplete, or the ‘match’ to the comparison reference sample from the suspect is limited because only a few attributes or characteristics are available for comparison. In turn, this requires a subsequent interpretation phase rarely featured in the television programmes, addressing the question ‘how likely is it that I would see these characteristics if this sample was not X?’, or ‘how likely is it that these samples would correspond in these specific attributes by chance if the samples in fact originate from different source materials?’

When trace evidence appears to have been transferred between a suspect and a victim, the forensic scientist has to consider the possibility that the trace evidence was in fact transferred indirectly, via an intermediary surface (‘secondary transfer’), or even via multiple indirect transfers (for example, ‘tertiary’ transfer). This can have significant implications – for example, the presence of a suspect’s DNA on the underwear of a victim of indecent assault may sound incriminating. However, a plausible explanation may be that it originated from DNA transferred legitimately when the suspect shook hands with the victim earlier in the evening at a social event. This DNA may have then been later transferred from the victim’s hands to her underwear when she visited the bathroom. After trace evidence has been transferred, there is the issue of persistence. For example, it is unusual for the clothing of a suspect, or their vehicle, to be seized immediately after a crime has been committed. In that time, at least some of the fibres transferred to the suspect’s clothing from the victim will have been lost during wear. The vehicle will have visited multiple places since the crime, during which some of the soil from the crime scene may have been lost from the wheel arches, for example, and additional biological debris from subsequent journeys will have been deposited on top of any remaining material of interest. Additionally, the impacts of rainfall, heat, freeze–thaw, degradation by organisms, amongst other factors, can all affect the material trace evidence that had originally come from the crime scene. 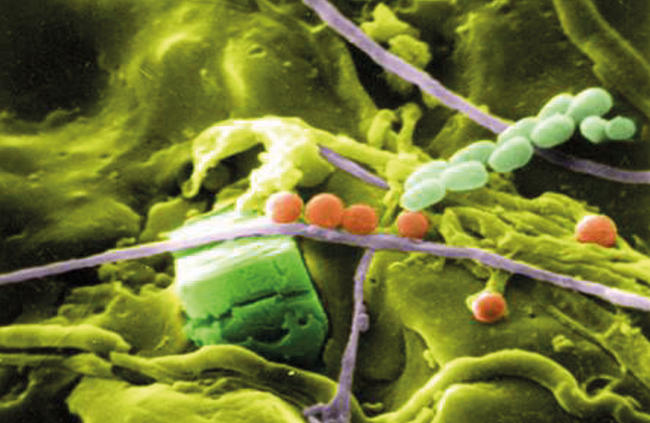 Not many of the CSI programmes feature court, as that is usually a long, slow process, and not generally exciting viewing for the general public. As a result, the exposure of the public to forensic science is mainly from the dramatic crime scene reconstruction, often using a TV studio’s replica crime lab, where results are obtained instantly. However, in reality, all methods usually take a long time to carry out carefully according to structured protocols. Results are rarely unequivocal, and the evaluation of those findings in the context of the case circumstances is frequently open to multiple interpretations, all of which should be appropriately assessed and communicated effectively by the expert witness at court.

In adversarial legal systems such as in the UK and US this requires the forensic scientist to present their findings, and their interpretation of those findings, to a jury of members of the public. In countries with an inquisitorial legal system, for example Germany, criminal evidence is presented to a judge or panel of judges. However, presenting scientific evidence in court to a jury of laypersons brings its own array of challenges. Take, for example, the use of microbiology in the investigation of crime. If the object of interest is far smaller than can be seen by the naked eye, it is even more difficult for the layperson to visualise than a blood spot or a mud stain. The forensic scientist must therefore first explain to a jury of diverse educational backgrounds the fundamental nature of the microscopic evidence type, at a level that the jury understands, before moving on to more abstract issues such as transfer and persistence of the particular evidence type. In explaining the significance of the forensic evidence, the forensic scientist is often required to try to convey concepts such as frequency and probability to a lay jury – perhaps no wonder the CSI programmes steer clear of the court arena!

Presentation of forensic evidence to juries in court is now frequently an exercise in expectation management; juries expect an array of forensic techniques to have been utilised in every case, regardless of cost to the public purse, and their expectations of forensic outcomes are informed (or frequently misinformed…) by CSI programmes.

The forensic scientist might explain to the jury that he/she would not have expected to find blood spatter on an offender’s clothing given the alleged case circumstances, however, nowadays the manner in which that interpretation is presented has to be sufficiently persuasive to counter the jury members’ pre-conceived views on what blood spatter would have been produced, influenced by what they have seen on their favourite CSI programme! 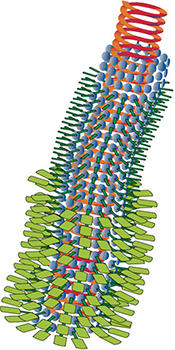 So, while new forensic tools are becoming progressively available, we need to exercise caution in their use and in communication of their outcomes to both the investigator in the intelligence phase of an operation and to the lawyers and juries in court. Care, caution and clarity are key rules of a forensic scientist whether at the crime scene, lab or court, while our fictional counterparts seem to take speed, style and certainty as their mantra.

If forensic scientists can work more closely with crime authors and TV production companies, providing clear plausible science, while still allowing for artistic licence, then the people who serve on juries and judges would be better placed to make the judgments required at activity level in court, thus improving the outcome of our criminal justice systems. Thankfully, responsible crime writers are already striving to make this happen.

Images: The fiction – a scene from the TV series CSI: NY. Lindsay Monroe-Messer (Anna Belknap) talks to Danny Messer (Carmine Giovinazzo) while investigating the remains of a food truck explosion. Getty Images. The reality – at a crime scene recovering evidence in full personal protective equipment. Lorna Dawson. False-colour SEM image of a soil showin clays, bacteria and fungi spatially located from a soil smear. James Hutton Institute. Computer-generated image of a virus from a berry, which could be used to infer contact with a particular plant. James Hutton Institute.