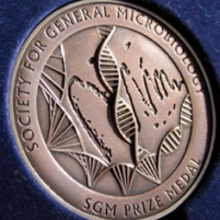 Sir David Baulcombe, Royal Society Research Professor and Regius Professor of Botany at the University of Cambridge, has been awarded the 2015 Prize Medal. This award is presented annually to an outstanding microbiologist who is a global leader in his or her field and whose work has had a far-reaching impact beyond the discipline of microbiology.

Sir David is awarded the Prize for his discovery of siRNAs in plants, which has led to huge advances in the field of medicine. Highly regarded by the science community, he was made a fellow of the Royal Society in 2001 and received their 2006 Royal Medal. Sir David received his knighthood for services to plant science in 2009 and has also been awarded the 2014 Gruber Prize in Genetics.

Sir David heads the RNA Silencing and Disease Resistance Research Group at the University of Cambridge working on small RNA silencing and epigenetics.

The 2015 Fleming Prize has been awarded to Mike Brockhurst, Professor of Evolutionary Biology at the University of York, in recognition of his exceptional research on the evolutionary biology of microbes.

Mike currently has nine competitive grants running either as principal supervisor or as joint principals. He is a coordinator on two research networks and collaborates widely both nationally and internationally, having been a member of the organising committees for two international conferences and been invited to give plenary talks at four international meetings.

Robin Weiss, Emeritus Professor of Viral Oncology at University College London has been awarded the 2015 Marjory Stephenson Prize. Robin was awarded the Prize for his outstanding contribution to microbiology through his pioneering work on retroviruses, particularly endogenous retroviruses and the identification of CD4 as a co-receptor for HIV-1, HIV-2 and SIV.

Robin also co-developed the HIV diagnostic antibody test (Wellcozyme) that was adopted for screening blood donations throughout the UK and in many European and British Commonwealth countries. He also assisted in the work that showed that “Slim” disease in Africa was actually AIDS and was associated with HIV infection, thus confirming the suspected pandemic of AIDS in Africa.

During his career, Robin has been Director of the Institute of Cancer Research, managed an international HIV vaccine discovery consortium and co-authored over 180 publications. He was also President of the Microbiology Society between 2006 and 2009.

His laboratory continues to address the immune response to HIV and why no successful vaccine to HIV has yet been developed. Their research is funded by the Medical Research Council, the European Union and the Bill & Melinda Gates Foundation.

George Lomonossoff, John Innes Centre, Norwich, has been awarded the 2015 Unilever Colworth Prize. The Prize, awarded to a researcher who has demonstrated outstanding contribution to translational microbiology, recognises George’s work developing the CPMV-HT protein expression system, which allows plants to become “bioreactors”, capable of producing molecules like antibodies or vaccines. George has had a distinguished career in the area of plant virology and in 2012, George was co-awarded the BBSRC’s Innovator of the Year Prize, for his work on the system.

In addition to promotion of his work to scientific audiences, George also engages with members of the public through talks at schools, Friends of John Innes (FoJIC) events and a variety of other BBSRC-sponsored events. He also engages productively with commercial organisations to ensure his research achieves maximum impact.

The 2015 Peter Wildy Prize has been awarded to Simon Park from the University of Surrey, in recognition of his outstanding work in the area of scientific communication. Simon uses a highly imaginative approach to science communication, using methods usually confined to creative arts practice to attract large numbers of the public to engage in various concepts of microbiology. Projects include a Wellcome Trust- funded initiative in collaboration with artist Anne Brodie, in which Park explores the communication and light-producing properties of bioluminescent bacteria outside of the usual confines of pure scientific practice. One of the outcomes of this project was the "Bioluminescent Photobooth", which is a darkened and portable booth into which people enter to have photographic portraits taken using only the ethereal light generated by the bioluminescent bacterium.

Dr Parks’ own research is directed towards applying the techniques of molecular genetics and functional genomics to problems of specific relevance to food safety.

Nominations for the 2016 Prize Lectures and the 2017 Prize Medal are now open.

Click here for full details on the process and criteria. Nominations should be sent to [email protected] and submitted no later than 30 April 2015.