Ant brains manipulated by a fungus 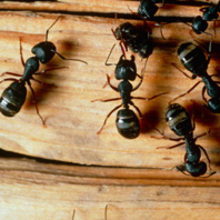 There can be few things more frightening than the thought of an alien organism taking over your brain and directing your behaviour for its own purposes, yet this is the fate of carpenter ants that have been infected by Cordyceps fungi. These so called "zombie ants" and their parasitic masters have been the inspiration for Hollywood movies and video games, not only because of the bizarre actions the ants are made to perform, but due to the grotesque structures that grow out of them.

There are about 400 species of fungi in the genus Cordyceps, many of which parasitise insects and other arthropods. Medicinal properties have been attributed to compounds produced by some of them and they have attracted particular attention due to the bizarre forms that their fruiting bodies grow into when they emerge from the dead bodies of their hosts. Some of those with particular mind-bending abilities have now been placed in the genus Ophiocordyceps, the most studied being Ophiocordyceps unilateralis. This species was first recognised in 1859 by Alfred Russel Wallace, the biogeographer and conceiver, along with Charles Darwin, of the theory of evolution through natural selection. O. unilateralis is now known to be a large species complex with members distributed throughout tropical rainforests worldwide; indeed four new species were recently described infecting carpenter ants in Minas Gerais, Brazil.

The behaviour of zombie ants

Ants encounter the spores of O. unilateralis when walking along their foraging trails. Enzymes, secreted by the fungal spore, help it to penetrate through the hard outer skeleton of the ant and the fungal hyphae then grow inside its body, eventually taking over its nervous system. Infected ants leave their nests and trails in the tree canopy, wander around and twitch convulsively until their movements cause them to fall to the ground. In the leaf litter they search for areas within a very specific range of temperature and humidity then, at a particular time of day, they begin to climb up stems to reach the underside of leaves at a particular height from the forest floor. Here they bite into the central vein of a leaf and their mandibles (jaws) clamp down and enter a state of lockjaw caused by the atrophy of the mandibular muscles. They cannot release themselves from the bite, which is known as the "bite of death" and remain hanging underneath the leaf when dead. Interestingly, David Hughes and colleagues at Penn State University’s Genomics Institute have identified a compound produced by the Cordyceps fungus that causes this muscle atrophy. 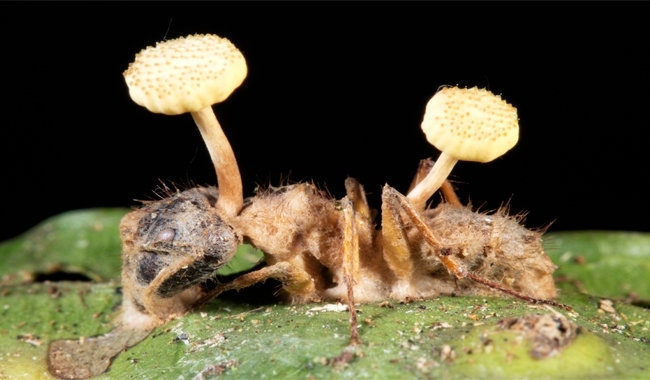 Although the ant is dead, the fungus continues to grow inside the cadaver. Eventually, out of the back of the head of the ant a long tube slowly emerges. This is the stalk of the fruiting body of the fungus. The tip of the tube swells and fills with fungal spores that are then shed into the path of new foraging ants below. The release of spores in the specific environment that the fungus dictated the ant to select is essential for spore dispersal. Recent investigations have shown that when cadavers of ants infected with a similar species of Cordyceps are placed in an ant’s nest they are rapidly removed before spores can be produced and infect the nest mates. Furthermore, the fungus cannot complete its development if infected cadavers were placed in an empty nest. Clearly, the humidity, temperature and elevated position of the leaf selected for the ant’s death bite is highly adaptive as it provides the ideal environment for the fungus to continue growing and gives its spores a better chance of dispersal to areas where they will encounter more ants.

The mechanism behind manipulation

The woods of South Carolina, USA, are also home to a species of the O. unilateralis complex that has recently been investigated. This species causes carpenter ants to die gripping onto the underside of twigs rather than leaves, as do their Brazilian relatives. Only two of the four species of carpenter ant in this area of woodland are naturally infected with the fungus, although it will grow in all four ants when injected into them in the laboratory. When each species was injected they were all killed by the fungus (one too quickly for further investigations). After death, fruiting bodies grew out of the back of the two species of ants that were found naturally infected in the forest. However, no such tube emerged from the third species (the one that was not infected in the wild) even though fungal spores were found inside its cadaver. The behaviour of the ants also differed. The two ant species infected with the fungus in the wild climbed up and bit into the twigs provided in their cage, hanging there before they died, but the other species did not exhibit this behaviour. It would seem that the fungus could only manipulate the behaviour of the two naturally infected species and only grew properly in the ant it had co-evolved with.

To determine whether the fungus could distinguish between its natural hosts and a novel ant, and therefore secrete different molecules into the ants, the investigators grew the fungus in culture with the brains of each of the four different ant species. They collected and analysed the substances secreted by the fungus and found that it responded by secreting a specific set of metabolites in response to each brain type, suggesting it could recognise the different signals given off by each one. Altogether the secretion of 73 compounds was significantly increased in response to one ant brain alone.

One of the molecules secreted by the fungus was identified as guanidinobutyric acid. This molecule is known to be involved in the transport of compounds across the blood–brain barrier and has been involved in convulsions and epileptic discharges in rodents. A putative identification of a sphingosine was also made. The research group then tried to mimic the action of the fungus on the behaviour of the ant by injecting various dilutions and combinations of these two metabolites into uninfected ants. Unfortunately, these attempts were fruitless and they concluded that multiple compounds in the fungus secretome are probably involved in manipulating host behaviour. It is likely that more candidate manipulation molecules will be identified in the future when the fungus metabolome is better annotated.

Meanwhile, it is not surprising that manipulation signals may be multiple as the behavioural changes that the ant exhibits are actually a complex series of behaviours that occur in a specific sequence. They are remarkably reminiscent of behavioural changes induced in shrimps when infected with the immature stages of a spiny headed worm. The shrimps are induced to swim upwards and grip vegetation floating on the surface, the muscles of their pincers undergoing a tetanus-like reaction, and they stay there until accidentally eaten by the next host in the parasite’s life cycle.

This study of one species of Cordyceps fungus demonstrates how specific these interactions can be. The fungus responds differently to chemicals from the brains of different ant species and only some of these brains will stimulate the fungus to produce the chemicals that create zombie ants that aid the fungus to disseminate its spores.

This article is based on a blog posted by BugBitten.