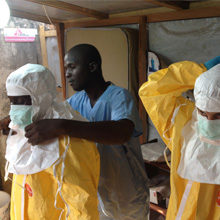 Ebola virus disease (EVD) is a viral haemorrhagic fever caused by infection with Ebola virus, a member of the Filoviridae family. EVD is a zoonosis, a disease transmitted to humans from animals, with a natural reservoir probably in fruit bats.

The virus is usually introduced to humans through close contact with blood, secretions, organs or other bodily fluids of infected animals such as fruit bats, monkeys and antelope. The incubation period of EVD ranges from 2 to 21 days and cases are infectious only after they start showing symptoms. These are a sudden onset of fever, fatigue, muscle pain, headache and sore throat, followed by vomiting, diarrhoea, rash, and in many cases, internal and external bleeding.

Ebola spreads through human-to-human transmission via direct contact through broken skin or mucous membranes with the blood, secretions, organs or other bodily fluids of infected people, and with surfaces and materials like contaminated bedding and clothing. Healthcare workers can get infected while treating patients when infection control precautions are not practiced strictly. Burial ceremonies in which mourners have direct contact with the body of the deceased person can also play a role in the transmission of Ebola. People remain infectious as long as their blood and body fluids, including semen and breast milk, contain the virus.

The lack of previous exposure to the virus facilitates rapid spread. Between March and November 2014, there have been over 17,000 cases and 6,000 deaths from EVD across affected countries in West Africa, mainly Liberia, Guinea and Sierra Leone. The case fatality in this outbreak is estimated at around 50% but the figures are likely to be underestimates as it is likely that not all cases nor all EVD deaths are identified and reported. There is no treatment, apart from supportive care to replenish lost fluids and blood, and currently (Dec 2014) no vaccine is available.

Control measures include case management, surveillance and contact tracing, efficient laboratory services, safe burials and community engagement. Raising awareness of risk factors and protective measures that individuals can take is key to reducing human transmission in local communities. Within healthcare settings, standard precautions such as hand hygiene, respiratory hygiene, use of personal protective equipment, safe injection practices and safe burial practices are required when caring for patients, regardless of their presumed diagnosis. Healthcare workers caring for patients with suspected or confirmed EVD need to take extra precautions to prevent contact with infective material. Laboratory workers are also at risk and samples should be handled by trained staff and processed in suitably equipped laboratories.

It took several months for the current outbreak to be recognised as a public health emergency of international concern. Preparedness is key – where there is risk of cases being imported into unaffected countries, with adequate levels of preparedness, the disease can be contained before it develops into large outbreaks, as demonstrated in Nigeria and Senegal. The other neighbouring African countries have now been prioritised for technical assistance on preparedness from specialist international teams. Away from Africa, several countries are also undergoing preparedness checks and exercises to test levels of readiness to respond if necessary. Enhanced screening at key UK ports is expected to ensure that travellers arriving from infected countries know the symptoms and how to access healthcare services rapidly. In October, several USA states announced quarantining measures for healthcare workers returning to the USA from West Africa to ensure the safety of the local population in the wake of a doctor returning from Guinea to New York developing the disease. However, restrictive measures such as these only serve to discourage volunteering in West Africa at a time when international help is most needed.

In response to the call for international aid, the UK Government is assisting in preventative, healthcare and humanitarian efforts, through provision of financial support, troops and staff deployment. However, Médecins Sans Frontières warns that the international response to the Ebola crisis has been slow and uneven leaving local people, national governments and non-governmental organisations to do most of the practical, hands-on work.

Consequences of the outbreak

The scale of the outbreak has put a huge strain on the already weak healthcare infrastructure in these countries and is crippling communities with a devastating impact on the local economy, education, food security and livelihoods. The focus on Ebola has led to a shift of attention away from ongoing healthcare issues and treatable diseases such as diarrhoea, respiratory infections and malaria which contribute to significant morbidity and mortality. Fear of contracting the disease from other patients is preventing people from seeking healthcare but existing medical facilities are also overwhelmed and under-resourced, many health facilities are closed and some are no longer dealing with non-Ebola cases.

Testing for three experimental Ebola treatments is expected to begin soon in West Africa. These are: brincidofovir, an antiviral developed for use against cytomegalovirus or adenovirus infections; favipiravir, developed for use against influenza; and convalescent whole blood and plasma treatment, giving antibody-containing blood or plasma from Ebola survivors to infected patients to boost survival chances.

Efficacy trials of Ebola vaccines have also been proposed. Two recombinant vector vaccines, ChAd3-ZEBOV (US National Institutes of Health and GlaxoSmithKline) and rVSV-Ebov (Public Health Agency of Canada and NewLink) are currently undergoing phase 1 trials. It is a hoped that a new vaccine becomes available by mid-2015.