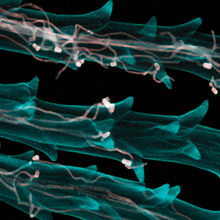 Mind-altering microbes as a concept has provided a wealth of dystopian imagery that has often been explored in science fiction. Richard Matheson’s novel I Am Legend (1954) describes an epidemic of human vampires that emerge as a result of a mind-altering viral infection. The idea of mind-altering fictional microbes that can change human behaviour (often with negative consequences!) was often exploited in the network TV show The X-Files (1993–2002) and on the big screen in Danny Boyle’s film 28 Days Later (2002). As is often the case with science fiction, it offers us new and engaging perspectives on scientific facts.

This edition of Microbiology Today provides a fascinating overview of some of the factual microbes that demonstrate mind-altering properties. These microbes have not confined themselves to “altering” human minds but have demonstrated their prowess throughout the animal kingdom.

Dietmar Steverding and Kevin Tyler describe how the common protozoan parasite Toxoplasma gondii, which can infect any warm-blooded animal, resides silently in the brains of billions of humans worldwide. For a long time, T. gondii was considered to be harmless but recent evidence suggests that it modulates neurotransmitter levels, changing personality and behaviour to increase its opportunity for onward transmission.

Paul Nicholson describes how a small fungus, Claviceps purpurea, infects a large number of plant species, including many cereals. This fungus produces a wide range of chemical poisons called alkaloids to keep it safe during the winter period and it is the ingestion of this fungus and the chemical poisons that cause a disease called ergot in humans. This disease was a scourge throughout the centuries and is associated with migraines, manic dancing and convulsions, as well as massive loss of life.

The antics of "zombie ants" and their parasitic masters the Cordyceps fungi have also been the inspiration for Hollywood movies and video games, not only because of the bizarre actions the carpenter ants are made to perform, but due to the grotesque structures that grow out of them. These ants are also the inspiration for Hilary Hurd’s article that outlines this parasitic relationship. Ants are not the only host for behaviour-changing parasites, tiny hymenoptera parasitic wasps are parasitoids that use viral particles to manipulate the behaviour of other species. Julien Varaldi details how these parasitoids inject their eggs into caterpillar hosts along with tiny circular viral particles. These viral particles are then actively transcribed and translated by the caterpillar cell machinery. The consequence of this phenomenon is that the parasitoid’s eggs circumvent the caterpillar’s immune system and the "viral" genes manipulate the caterpillar to create the newly hatched parasitic wasp.

Finally, we have an article written by Roman Stilling, Timothy Dinan and John Cryan who explore the recent advances in studying the effect of microbial colonisation on host physiology, metabolism and even host behaviour: are we as hosts not only dependent but also manipulated by our age-old microbial companions?

Richard Preston’s 1994 non-fiction book The Hot Zone, escalated public fears of bizarre, highly contagious viruses such as Ebola. These fears were stocked by a further flurry of non-fiction books that detail the tragic outcomes of microbial infections. The film Outbreak (Wolfgang Petersen, 1995) also graphically illustrated human bodies bleeding out from a highly infectious Ebola-like virus. Without doubt, these vivid, frightening illustrations of viral infections have been in the background of public consciousness as the most recent Ebola outbreak has been reported in the media. Veena Rodrigues and Anne Swift have provided the Comment for this edition. It provides a factual account of the recent outbreak and its impact on the countries most affected by this deadly infection.

Let’s hope that by the time this edition arrives and spring is round the corner the news from western Africa is more positive. We are exquisitely aware that this deadly virus has engendered a concerted, worldwide, humanitarian effort and an intense scientific will to focus research activity on beating this disease: Ebola, an example of a mind-altering microbe indeed!