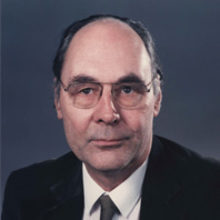 After obtaining a first class degree in Chemistry from Balliol College, Oxford he began his microbiological research studying bacterial resistance to sulfonamide drugs under the supervision of D. D. Woods. He then moved to the Chemical Research Laboratory at Teddington working with K. R. Butlin on sulfate-reducing bacteria. There his most startling and influential finding was that these, strictly anaerobic, bacteria contained cytochrome c3. Cytochromes had previously been thought to be confined to aerobic organisms.

In 1958, when Butlin’s group was disbanded, John moved to the Microbial Research Establishment at Porton, to study fundamental aspects of the survival of bacteria.

In 1962 he took leave-of-absence in the USA for seven months. On his way home he met Joseph Chatt FRS in New York. Chatt was Director-designate of a new Agricultural Research Council-funded unit for the study of biological nitrogen fixation. Bacterial growth experiments indicated that the metal molybdenum might be involved and Chatt, a distinguished inorganic chemist, would direct chemical attempts to emulate the process. John agreed to act as Assistant Director and to lead the complementary biological studies. Initially, these focused on the biochemistry, microbiology and physiology of free-living nitrogen-fixers. However, in 1969 Postgate put a student, Ray Dixon, onto the study of the genetics of nitrogen fixation. They managed to transfer the genes encoding the nitrogen-fixing ability to Escherichia coli that had never had that ability. The promise of the genetic approach led to an expansion of the Unit’s programme and in 1980 John became the Director.

John was made a Fellow of the Royal Society in 1977 and received many other awards. He retired in 1987, published over 200 research publications, and many more "popular" articles and several books. These included A Plain Man’s Guide to Jazz and Microbes and Man, first published in 1969, widely translated, and remaining in print in its 4th edition.

He lost his wife Mary in 2008 but leaves three daughters and seven grandchildren.

Head of the Nitrogen Fixation Laboratory from 1987 until 2000.