The Master Puppeteer? The impact of microbes on brain and behaviour 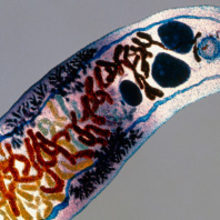 Parasitism is often acknowledged as one of the greatest accelerators of evolution, which has lead to the so-called "Red Queen Hypothesis" to describe rapid host–parasite co-evolution. Among the many outcomes of this evolutionary arms race are fascinating examples of host behaviour manipulation in order to increase parasite fitness. Researchers find a growing variety of parasites in all domains of life that depend on altering host behaviour for completion of their complex life cycles. Well-known examples are the small liver fluke Dicrocoelium dendriticum, directing ants to climb grass blades in order to enhance transmission to a ruminant host, or the Gordian worm Paragordius tricuspidatus, forcing infected grasshoppers to search for water, where the worm can reproduce. In addition, we also know behavioural manipulation as symptoms of mammalian diseases such as rabies, which induces aggression and water avoidance behaviour, or toxoplasmosis, best known for inducing attraction of rodents towards cat urine scent, which is also implicated in schizophrenia.

However, other forms of symbiosis (especially mutualism) have long been neglected with respect to their potential to manipulate host behaviour. With a rising interest in microbiome research they now emerge to be just as important – although their influence is subtler.

Much of the research demonstrating a role for the microbiota in behaviour modulation stems from rodent studies. At the centre of many of these studies are germ-free animals that have been raised without microbiota. But also behavioural studies on animals with either defined infections, antibiotic treatment or administration of probiotic bacteria have been carried out and the most commonly reported phenotype was altered anxiety-related behaviour.

There is now an increasing number of studies focusing on the positive behavioural effects of various bacterial strains, mostly Bifidobacterium, Lactobacillus and Bacteroides species but also transient commensals such as Mycobacterium vaccae.

In almost all studies the authors also reported biochemical and molecular changes in the brain. Specifically germ-free mice have an exaggerated stress response coupled with gene expression changes in different brain regions. In addition, alterations in neurotransmitter signalling, including neurotransmitters and associated metabolites and receptors, have been described.

Moreover, an increasing number of studies in animal models of stress, anxiety and depression also implicate a role for the microbiota in psychopathology, including irritable bowel syndrome (IBS) and also autism spectrum and other neurodevelopmental disorders.

In contrast to this considerable wealth of data and tight correlations, to date no closed chain of molecular events or mechanisms links the presence or absence of a certain microbe to a specific host behavioural output. The exact details of routes of communication between gut-dwelling microbes and the brain are poorly understood and must be a priority of future advancements in this area. Clearly important is the autonomic nervous system, especially the vagus nerve, as it was shown that some of the effects were absent in vagotomised animals. Another interface for microbe–host interactions is the immune system that is severely underdeveloped in germ-free animals but plays an important role during brain development. Finally, bacterial metabolites that are secreted into the gut lumen and taken up by the host could lead to changes in host brain physiology. The microbiota is not only capable of producing a range of neurotransmitters and neuroendocrine compounds (hormones), but is also the major source for short-chain fatty acids, which can regulate host metabolism and gene expression.

The gut microbiota is a directly tractable target (e.g. via diet) to develop new "psychobiotic"-based strategies for therapy in neuropsychiatric and neurological disease. However, solid mechanistic evidence, illuminating the black box between the gut lumen, brain and behaviour is needed to drive the field forward. 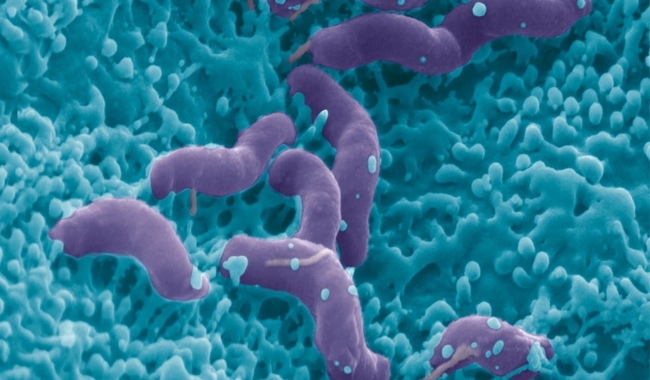 Many of the findings described above have resulted in dramatic headlines in the media and may lead to the impression that our decisions and emotions – good or bad – are driven by our ever-present microbiome.

Speculations are rising that, for example, feeding behaviour of the host might be manipulated by the special interests of particular microbes to influence what nutrients will be available in the gut. Also, we have previously argued that the microbiota may promote social behaviour and group living to more easily spread to new hosts and thereby reproduce more efficiently.

However, in many cases it turns out to be challenging to determine where a given micro-organism is located on what appears to be a mutualism–parasitism spectrum (Fig. 1). In contrast to the unambiguous parasitic manipulations, classification of host–microbe interactions is complicated by the need to define benefits and disadvantages for either side. As such, it is highly debatable whether strict commensalism, where only one partner benefits, while the other has neither advantages nor disadvantages, actually exists. Also, in apparently mutualistic relationships, many cases are not clear-cut. Here, both species are required to mutually benefit from one another. For example, the gut microbiota benefits from a constant supply of nutrients, while the host benefits from increased nutrient availability through microbial enzymic activity (e.g. digestion of fibre). But, since these advantages of the relationship may have compensated possible disadvantages during evolution, negative side effects of the association may be masked or not recognised as detrimental in retrospect today.

FIG. 1. THE EFFECT OF MICROBES ON BRAIN AND BEHAVIOUR. ALTHOUGH SOME WELL-KNOWN EXAMPLES OF PARASITES EVIDENTLY MANIPULATE HOST BEHAVIOUR IN THEIR OWN FAVOUR (SEE EXAMPLES ON LEFT OF FIGURE), IT IS UNCLEAR WHERE ON THE PARASITISM-MUTUALISM SPECTRUM OUR MICROBIOTA SHOULD BE PLACED DUE TO THEIR LONG-SHARED HISTORY OF CO-EVOLUTION. HOWEVER, IT IS CLEAR THAT THE MICROBIOTA CAN ALSO AFFECT BRAIN FUNCTION AND BEHAVIOUR. UNDERSTANDING THE MECHANISMS OF THESE INTERACTIONS AND PLACING THEM IN AN EVOLUTIONARY CONTEXT IS AN IMPORTANT ENDEAVOUR FOR SCIENTISTS WORKING IN THIS FIELD TODAY. 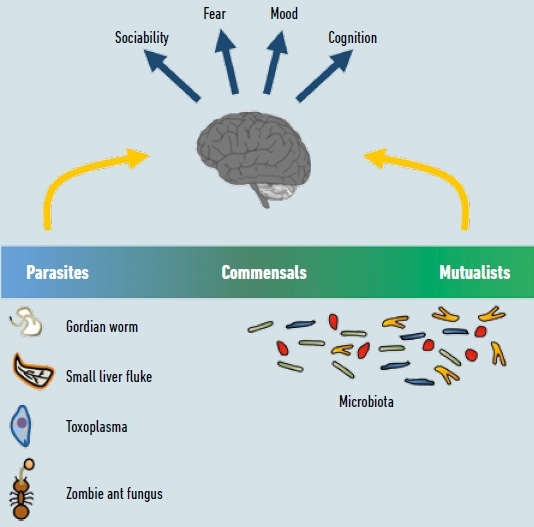 In addition, changes in the environment may revise the nature of an association. Evidence for a strong dependency on environmental conditions determining how a particular microbe is associated with the host comes from a recent study on Helicobacter pylori, which exhibits differing degrees of virulence in independent human populations. Thus, a causal timeline of symbiosis is hard to reconstruct in retrospect and even what appears as obligate mutualism today may not have started as mutually beneficial. Finally, the microbiome is a diverse ecosystem and what’s good for one bacterium may not be good for another.

In summary, the answer to why a "normal", healthy microbiota should influence behaviour may be a lot less spectacular than the term "manipulation" would suggest. The problem is that we tend to think about this matter as a unidirectional process and impose intentions on the bacteria. Furthermore, we tend to forget that all eukaryotic evolution has always occurred in the presence of microbes. Animals have never lived, and could never live, develop and evolve "germ-free" outside artificial laboratory isolators. From this perspective the question is just the wrong question to ask and there is probably no satisfactory answer to it, because the microbiome just became part of multicellular bodies while these formed and now shares a long history of co-evolution. Given this tight association, we cannot simply imply opposing intentions for the microbiota and the host. This new understanding of the microbiome has led to formulation of the hologenome theory of evolution that views the host and its microbiome as one integrated unit, the holobiont.

The question of who controls who therefore has no answer. While there are certainly microbes that harm us and may even not only influence but actively manipulate our behaviour, consciously or unconsciously, there is little reason to be worried about the intentions of the throngs of symbiotic bacteria living in our guts and body cavities.

Yet, to understand who we really are as a species and also to find new therapies for neuropsychiatric conditions, it is key to understand the cues and influences the microbes set on our nervous system, both during development and throughout life, and which mechanisms and pathways they use.