Viruses as the raw material for eukaryote evolution: lessons from parasitic wasps 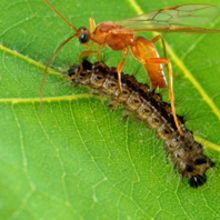 In the minds of most of us (including researchers), viruses are associated with illness. They are expected to debilitate, in one way or other, the host they infect. This is true for many viruses and a recent, sinister example of the Ebola epidemic in West Africa entrenches this view.

Yet, human beings, and all organisms that produce a placenta, wouldn’t have this property if a common ancestor had not captured some retroviral genes. Nowadays, these ancestral viral proteins that are encoded by these genes are crucial and participate in the formation of the placenta. This "domestication" of ancient viral genes (syncitins) likely gave an evolutionary advantage to these lineages. This illustrates that not all interactions with viruses have a negative impact on the host, or at least, the host may ultimately take benefit from this interaction on a long-term evolutionary scale. Recent sequencing of genomes revealed that all types of viruses (not only retroviruses that naturally integrate into their host’s genome) do integrate on some occasions into the chromosomes of their hosts. If these integration events occur in germline cells then they can be vertically transmitted (from parent to offspring) and may provide new genetic material for host evolution. On some occasions, such endogenous viral elements (EVEs) may give rise to evolutionary novelty.

Thanks to a virus, insects instigated gene therapy 100 million years ago

Gene therapy is the use of nucleic acid to treat a disease by delivering it into a patient’s cells. As you would expect, this therapeutic method requires a vector to deliver the nucleic acid into the cells. The DNA is usually packed into an engineered virus that serves as a vector, to get the DNA into the cells, and incorporated into the target chromosome. The first human attempt of gene therapy dates back to 1990. One hundred million years before, when primates still didn’t exist, this technique had already taken place in tiny parasitic wasps. These insects, called parasitoids, have a special way of life in the sense that they lay their eggs into the body of other insects, in this case caterpillars. They then develop as a true parasite inside the cavity of the caterpillar until they pierce the skin and emerge from their, now nearly dead, host to metamorphose and give rise to an adult wasp. This lifecycle has been said to have inspired Ridley Scott when he wrote the scenario of his famous 1979 movie Alien.

Most parasitoids are hymenoptera wasps and represent a huge diversity of species. For instance, the microgastroid complex whose ancestor instigated gene therapy 100 million years ago encompasses several thousands of species. Nowadays, when a female of this group (microgastroid complex) parasitises a host, she injects her eggs and also some viral particles. These viral particles contain different circular molecules of double-stranded (ds) DNA. This special genomic structure inspired their names, polydnaviruses. Thanks to the viral particles, these packed dsDNA molecules are delivered into various cells of the caterpillar where they are then actively transcribed and translated by the caterpillar cell machinery. The consequence of this phenomenon is that the caterpillar can no longer eliminate its parasite (the wasp egg) though encapsulation, which is the typical immune response of insects against foreign bodies. Furthermore, the expression of those “viral” genes manipulates the development of the caterpillar to create its parasite. 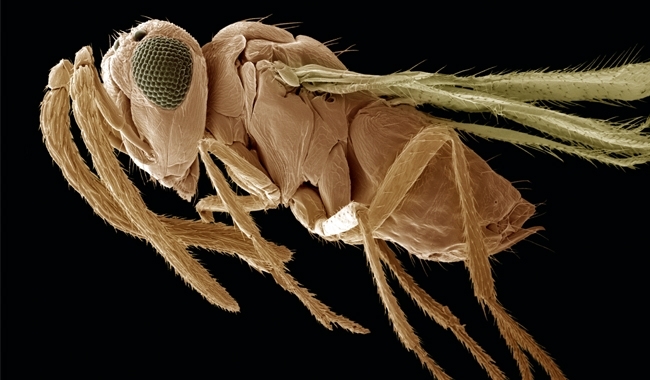 The evolutionary origin of these polydnaviruses has been elusive. When researchers obtained the first sequencing data on the circular dsDNA molecules packed within the viral particles, they were surprised to observe that these had nothing to do with viral DNA, but instead showed all typical properties of eukaryotic DNA. For instance, most of them contain several exons while viral genes typically contain only one. However, the link with viruses was made when they studied the way the "virus-like" particles are produced. Polydnaviruses are produced in the calyx of the reproductive apparatus of females, which is a region at the base of the ovaries. By studying the expression of genes during the production of these particles, it became clear that many had a viral origin: 29 genes resembling nudivirus genes were highly expressed and involved in the production of particles. However, as previously mentioned, no nudiviral genes are packed inside the particles. The hypothesis is that eukaryotic genes, important for parasitism success, gradually replaced the viral genes packed within the particles. Thus polydnaviruses are a kind of chimeric organelle composed of proteins of viral origin responsible for the production of the particles and DNA encoding eukaryotic virulence factors that are incorporated into the particles and expressed in the caterpillar. And this invention gave rise to the diversification of this clade leading to more than 12,000 species of wasps. All of them are totally dependant on this hybrid organelle for development.

A diversity of interactions

Another fascinating example of a peculiar virus–wasp interaction has been described in a parasitoid-attacking fruitfly larva. This wasp (Leptopilina boulardi) lays its eggs into fruit fly larvae (Drosophila) and the offspring then develops as a parasite until it emerges from its host. No more than a single parasitoid can develop in one Drosophila host. One would therefore expect that parasitoid females would not lay their eggs in already parasitised hosts, thus avoiding a highly risky competition for their offspring. Accordingly, some females are able to discriminate between parasitised and unparasitised larvae and refuse to lay in previously parasitised larvae. However, some females readily decide to lay an additional egg into an already parasitised host, a behaviour called superparasitism. This puzzling behaviour is inherited through the maternal lineage. When "superparasitising" females laid eggs into larvae already parasitised by "normal non-superparasitising" females, it was observed that the offspring of normal females also adopted the "superparasitising" behaviour at the adult stage. This indicated that the "superparasitism" behaviour was transmitted contagiously within the superparasitised Drosophila larva. Electron microscopy and molecular work revealed that this "superparasitism" behaviour was in fact induced by a virus, later called LbFV, that manipulates the behaviour of the wasp toward its own benefit. The virus imposes the superparasitism behaviour on its host and thereby increases its own spread through horizontal transmission. The effect of the virus seems very much limited to this behaviour, with no noticeable effect on the wasp’s survival.

Although viruses are classically viewed as pathogenic entities, reducing the survival of their hosts, studies in the parasitoid wasp clearly demonstrate that the interactions may be more subtle, like in the case of the behaviour-manipulating heritable virus of L. boulardi. They may have a strong positive effect on long-term evolution, like in the polydnavirus example. Finally, it is now known that the domestication of viruses has occurred repeatedly and independently in parasitoid wasps. Each of them led to slightly different outcomes but the general picture remains the same: the integrated virus allows the wasp to efficiently circumvent the immune response of its host. This indicates that wasps and viruses have had intimate interactions for millions of years and that viruses have greatly contributed to their present diversity and distribution. One remaining question is what type of interaction did the ancestral wasps have with the ancestral polydnaviruses? One may speculate that the ancestor of polydnaviruses first evolved vertical transmission (from mother to offspring) like LbFV, thus selecting for reduced virulence. Possibly, it may also have benefited from the same behavioural manipulation that LbFV induces to spread and maintain in wasp populations, thus increasing the stability of the association and the opportunities of genetic exchanges between the wasp and the virus. Future genome sequencing programmes of these wasp and their associated viruses will likely shed light on the processes at play.