The unexpected influence of microbiology on the disposal of radioactive waste 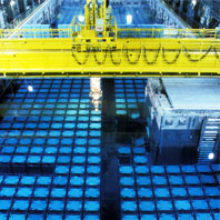 The safe disposal of radioactive waste in repositories constructed deep underground might not sound like a topic that requires much input from microbiologists, but a surprising amount of work has been carried out around the world on how micro-organisms might be beneficial or harmful for the safe containment of such waste.

The UK has a legacy of radioactive waste from activities such as power generation, medical applications, defence and research. This material is currently securely stored at sites around the UK. The UK Government, and those of many other countries, have identified that the best and safest approach to long-term management of this waste, in particular, higher-activity waste, is through ‘geological disposal’: placing the waste in carefully engineered chambers deep underground. This repository will be constructed between 200 m and 1,000 m below the surface, in a geological setting that has been carefully selected for its ability to contain the waste for hundreds of thousands of years, and will isolate waste until harmful radionuclides have decayed sufficiently. The repository itself will be highly engineered and contain multiple barriers (the last of which is the mass of rock between it and the surface), designed to limit any release of radionuclides. The UK Government published a White Paper in 2014 setting out how it will implement geological disposal and is currently undertaking a national exercise collating information about the different types of rocks that occur to depths of about 1,000 m beneath England, Wales and Northern Ireland.

So, what is the relevance of microbiology to the disposal of radioactive waste? The conventional view used to be that the subsurface was inhospitable to life below a depth of more than a few metres, but as microbiologists have searched deeper, they have continued to find signs of life. Micro-organisms are now known to persist to several km below the surface – for example, bacteria have been found living 3,200 m below the surface in the Witwatersrand Basin, South Africa. However, it is generally true that as you go deeper, microbial number and activity declines. At the proposed depth of a repository, microbial activity will typically be low. This decline relates to a number of factors, including the consumption of oxygen and easily available organic carbon sources near the surface, and the availability of physical space in rocks.

Work at underground research laboratories in rock types under consideration for hosting a repository often reveals a sparse but diverse microbial community. Certain clay formations, identified as suitable rock types, present a particularly challenging environment for micro-organisms: the pore space is much smaller than the size of a typical bacterial cell, water is not freely available, and any organic carbon tends to be either inaccessible, or unavailable to micro-organisms, or both. Researchers from other European countries, working on their own disposal plans, have identified viable, though largely dormant, communities of micro-organisms in clay formations that could be suitable for a disposal facility, for example, the Boom Clay at Moll in Belgium or the Opalinus Clay at Mont Terri in Switzerland. Research in other suitable rock types, such as at the Äspö Hard Rock Laboratory in Sweden, has identified a metabolically active microbial community in water flowing in fractures in the rock. Microbial metabolism in these subsurface environments is often driven by hydrogen-consuming autotrophs. These in turn can provide the organic matter to support other micro-organisms such as fermenters and heterotrophic sulfate-reducing bacteria.

Potential impacts of micro-organisms around a repository

Based on this research, we can expect that the rock surrounding any proposed repository is likely to be able to maintain micro-organisms. The excavation of a repository will dramatically change the environment, temporarily introducing an oxygenated atmosphere and a variety of nutrients associated with contamination and waste that any construction operation brings. This is likely to alter the microbial community in diversity, activity and biomass. Once a repository has been filled, it will be sealed, trapping any micro-organisms that have been introduced, along with materials used in construction that could act as nutrient sources for micro-organisms. Extensive lists of these materials have been drawn up describing potential substrates that micro-organisms could utilise, including rubber from tyres, diesel, hydraulic oils, fibres from clothing and organic material from explosives. Following closure, any micro-organisms will have to endure a number of stresses including high radiation, high temperatures and exposure to hyperalkaline conditions, but again research points to the remarkable ability of microbes to survive these stresses. The challenges are to understand what microbial activity might be supported in this extreme and inaccessible environment, to understand how this may change over the lifetime of the repository, and to understand what the potential positive or negative impacts might be. This often requires complex, high pressure experiments (see figure).

Metal waste containers are selected to resist corrosion; however, over the long periods of a repository lifetime, they, and waste metals, may corrode, producing hydrogen. This hydrogen is then available for certain groups of micro-organisms to use. Sulfate-reducing bacteria are a particular concern in this respect as they consume hydrogen and produce hydrogen sulfide that can accelerate the corrosion process. However, there are also potential benefits from such a microbial ecosystem. Post-closure, microbial metabolism will produce carbon dioxide and in an anoxic environment, methanogens could combine hydrogen and carbon dioxide to form methane, reducing the overall volume of gas and gas pressure generated within the repository, thus reducing risk.

In many proposed repository designs, swelling clays will be used as part of the multi-barrier system. Blocks or pellets of this clay packed into the disposal facility will become saturated by groundwater, causing the clay to swell to fill the voids in the repository, creating a further barrier to the escape of radionuclides. This clay itself contains micro-organisms, especially spore-forming, sulfate-reducing bacteria, which survive the industrial processing of the blocks and pellets. Microbial reduction of iron within clay minerals has been demonstrated and alters the structure of clays, reducing their swelling capacity and potentially reducing the ability of the clay to act as an effective barrier.

Micro-organisms could be beneficial in other ways. For example, the ability of a wide range of micro-organisms to reduce uranium is known from lab and field studies. The reduction of soluble U (VI) to insoluble U (IV) retards uranium transport and has been suggested as a method of bioremediation in contaminated soils. Micro-organisms could perform the same reactions around a repository, retarding the movement of radionuclides. Uranium is also mobile when it forms soluble complexes with some organic molecules that will occur as breakdown products of intermediate-level waste. Microbes have been identified that consume these molecules, further reducing the mobility of complexed uranium. This is another example of microbial activity that could be beneficial around a repository.

The complex processes that will occur following the closure of a radioactive waste repository, the long timescales involved and its inaccessible nature make research challenging. However, close collaboration between scientists and organisations tasked with managing and disposing of radioactive waste have, over many years, significantly advanced our understanding. For the UK, this means that there is a strong science base to draw on when considering our own repository. As far as microbes are concerned, the key processes are now understood, though research will be required to understand site- and repository-specific factors that may influence microbial activity.

For general background on the UK plans for geological disposal of radioactive waste: https://www.gov.uk/government/news/geological-disposal-understanding-our-work

Simon Gregory has taken a circuitous route through neuroscience, human population genetics and aquaculture to get to where he is now. He leads the geomicrobiology research at the British Geological Survey. His current research interest include microbial aspects of radioactive waste disposal, carbon capture and storage, biomining and shale gas extraction.

Megan Barnett discovered her interest in microbiology while studying fossil biofilms for her geology degree dissertation. She went on to gain a PhD from Cranfield University, looking at adapting instrumentation for microbial detection and identification in the field. Megan has worked at the BGS since 2015 on deep and surface microbiology.

What do you find most enjoyable about your job?

Simon: I enjoy the fact that I work with a lot of experts in other disciplines (mineralogists, petrologists, geochemists, rock mechanics, etc.) who bring a different point of view to the table. It truly is a multidisciplinary task to understand geomicrobiological processes, and I am constantly learning new things from them.

Simon: Only a very foolish person would be prepared to offer predictions in any area of science, but what I would like to see is continued effort to develop robust ecology theories that can be applied to microbiology. Doing this will allow us to understand the mechanisms of how microbes interact with the environment and to better predict what the impact of those interactions will be in a vast range of natural and engineered environments and at a range of scales, from site-specific locations such as a geological disposal facility to global biogeochemical processes.