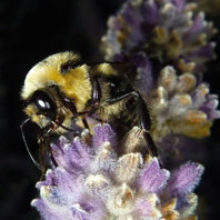 It is time to reduce the environmental footprint of insect pest control. Bacteria are the ideal tools for developing ‘smart’ precision bio-insecticides and preventing disease transmission by insects.

Despite the current US President’s denials, there is incontrovertible evidence that human activity has negatively impacted our environment. Changes in the abundance, diversity and distribution of invertebrates (and insects in particular) are being brought about by climate change, intensive agriculture, pollution and habitat loss. The windscreen ‘splatometer’ test – a crude gauge of the flying insect populations on our roads – suggests that insects are declining precipitously. As the great majority of insects are beneficial in some way (such as pollinators, Fig. 1) and integral to ecosystems, we should all be concerned. Other species have proven more adaptable, but these include the ‘undesirables’: species such as the western flower thrips (WFT), an agricultural pest that has surged outwards from the USA into every cultivated continent of the world in just six decades. Aedes aegypti, a mosquito vector of arboviruses such as Zika, has also spread across continents in the same period (Fig. 2).

Our attempts to increase yields of crops and control insect vectors of disease through the use of conventional chemical pesticides have undoubtedly been met with fantastic short-term successes. However, evolution never stands still and the use of each new insecticide eventually selects for resistance in the target insect population. Moreover, many of these chemicals indiscriminately kill non-target species including beneficial pollinators and aquatic larvae in surface waters polluted with insecticide-contaminated run-off. Many regulatory agencies have exercised prudence by imposing reductions or bans on certain pesticides (e.g. neonicotinoids, now notorious), rather than gambling on the expedient evolution of resistance in non-target species. But how will farmers fill this pesticide vacuum, if – as it must - agricultural output is to continue to increase? One increasingly mainstream alternative is integrated pest management (IPM) schemes that rely on biological control agents such as predatory insects, nematodes, insect-pathogenic fungi and the bacterium Bacillus thuringiensis. These may have a smaller environmental footprint, but may be less easy to apply in an effective manner by inexperienced farmers, with consequences for productivity.

Release of modified insects as a population control measure

Smart measures to control pest insect populations should have little or no impact on the other flora and fauna. For example, an understanding for how bacterial symbionts can impact the biology of their insect hosts has led to a control strategy that limits the transmission of dengue virus. This intervention is urgently needed as dengue fever outbreaks now affect almost 2.5 billion people globally. Strains of the endosymbiont Wolbachia isolated from fruit flies are used to infect A. aegypti mosquitoes. The bacteria modify the breeding success of these mosquitoes so that the infected insects, once released into the environment, become dominant in the population. Moreover, the bacteria effectively reduce the mosquito’s viral load and this diminishes their ability to transmit the virus (at least for now – another mosquito species, A. albopictus that naturally harbours Wolbachia, is very effective at virus transmission). This highly targeted intervention to control insect-vectored disease is believed to have little or no impact on other animals or plants. It requires the breeding and release of huge numbers of modified insects, an expense that can be justified because of the protection afforded to humans. Although screwworms – which are livestock parasites – have been controlled for decades via the mass release of radiation-sterilised male insects, the costs associated with equivalent targeted insect releases cannot be justified for protecting arable crops, fruit and forestry because of their relatively low value and high acreage. Alternative ‘smart’ measures are needed to support the productivity of non-animal based agricultural systems.

Fig. 2. The mosquito Aedes aegypti during a blood meal. 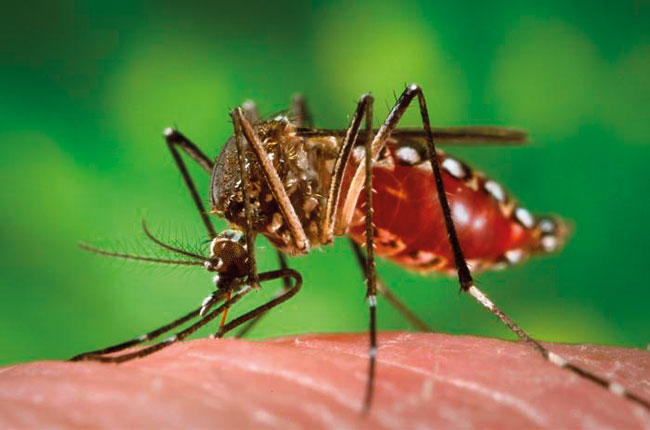 The soil bacterium Bacillus thuringiensis (Bt) produces endotoxins during sporulation that have specific toxicity to several insect species. The inactive crystal protein is enzymatically converted to an active toxin inside an insect’s gut. Bt spore and crystal preparations have been used for a century to control crop and disease pests, and in the last two decades, Bt toxin genes have been expressed in transgenic crops (Fig. 3). Notable successes are Bt cotton varieties that resist pests like bollworms, and Bt corn, which controls the European corn borer, corn rootworm and corn earworm. Taken as a percentage of total farmed acreage, transgenic Bt varieties represented more than three quarters of all US corn and cotton crops by 2013. Farmers report substantial improvements in productivity concomitant with reduced insecticide usage, and a Chinese study indicates that these conditions allow populations of beneficial insects (such as ladybirds and lacewings) to recover, while suppressing aphids and other pests. However, the rapid and extensive adoption of these GM crops, if not cautiously managed, can drive (and already has driven) the evolution of Bt toxin resistance in target species.

While it is generally accepted that Bt crops have little effect on non-target insects, another genetically modified (GM) crop variety has been developed that offers potentially still greater insecticidal precision. Maize has been engineered to produce double-stranded (ds) RNA that, once ingested by a pest insect, can induce RNA interference of an essential insect gene. By this mechanism, the western corn rootworm is killed by the very crop upon which it feeds (Fig. 3). The specific sequence of the dsRNA is such that it should target the pest gene and not orthologs (genes of same or similar function) in non-pest species. Indeed, safety tests show that the dsRNA has no adverse effects on a battery of non-target organisms. It is also encouraging that there are no reports of insects evolving resistance to these plant-based RNAi-based biocides.

Transgenic Bt and dsRNA crops work best against insects that feed exclusively on one crop species. But many pests are polyphagous – they can feed on a variety of plants. In this situation, plant-based biocides are unlikely to offer much protection to other crops in the vicinity, and it is hardly feasible to engineer every species of vulnerable crop with a pest-specific biocide.

One polyphagous insect of global importance is the diminutive but highly destructive WFT, which not only feeds on an enormous range of plants, but also transmits tospoviruses – plant pathogens with a broad host range. An approach to deliver sustainable biocidal RNA interference to this insect involves engineering a symbiotic bacterium related to Pantoea to continuously produce dsRNA from within its niche in the insect’s gut (Fig. 3). The dsRNA targets an essential WFT gene, with lethal consequences. The technology, symbiont-mediated RNAi (SMR), is in the early stages of development, but offers two-tier specificity – combining the specificity of symbionts for their host with the sequence-specificity of RNAi. Because symbiotic insect bacteria have co-evolved with their hosts and typically exhibit genome reductions that render them ill-equipped to survive elsewhere, GM versions of these symbionts are likely to have little or no impact on other species.

SMR can be utilised in other ways, such as reducing the fertility of blood-sucking insects called kissing bugs, which transmit Chagas disease. Their symbiotic rhodococci are transmitted among a colony of the insects due to their charming behaviour of probing each other’s excreta (coprophagy). The bacteria can also remain dormant in the excreta for long periods, so this application of SMR could provide a useful, targeted approach to limit Chagas disease in rural populations of South and Central America. SMR could be used in IPM to increase a pest’s susceptibility to biological control agents such as entomopathogenic fungi, and there are also prospects for using SMR to target insect-vectored pathogens in insecta.

Many of these smart methods of insect control depend on microbes, and the more we understand about insect–microbe interactions, the more we can exploit them to develop targeted interventions with reduced environmental footprints.

Miranda Whitten’s background is in insect physiology and host–pathogen interactions, and the use of bacterial symbionts for reverse genetic approaches to pest control and disease transmission. She is also a member of the Guild of Natural Science Illustrators. This is Miranda’s third year of Microbiology Society membership.

After a PhD at the University of Glasgow, and three postdoc positions spanning six years, Paul Dyson established his own group at Swansea University, focusing primarily on antibiotic-producing Streptomyces. More recently, his research has embraced the use of bacteria to deliver gene silencing in insects and solid tumours. He has been a member of the Microbiology Society for 35 years.

How did you enter this field of work?

Paul: With experience of genetic manipulation of Streptomyces, Miranda asked me if we could genetically manipulate another actinobacterium: Rhodococcus rhodnii, a symbiont of ‘kissing bugs’. This was the beginning of a fruitful collaboration to develop symbiont-mediated RNAi for insects.

Paul: The most challenging aspects of the job are managing the expectations of members of my research group and maintaining funding streams to keep them in post.