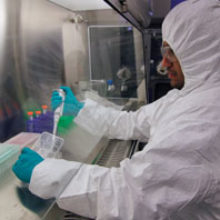 Imagine a future in which someone suffering from a debilitating disease such as diabetes, instead of taking daily insulin injections, need to take only one injection in their entire life? No more panic attacks when the insulin syringe goes missing, and they can have a life just as the non-diabetics enjoy. Welcome to the world of gene therapy, dubbed the ‘medicine of the future’.

A century has passed since Garrod, in his seminal work on alkaptonuria, discovered that genetic disorders can result in diseases. Now, we know that a significant number of health problems have genetic causes. One approach is to treat fire with fire (genetic diseases with genetic medicine). This is ‘gene therapy’, and to transfer the gene therapy medicine from the laboratory bench to the hospital bed, we need vehicles (vectors).

Preparing vectors can be compared to preparing fish for consumption. The fish is gutted (‘bad’ genes are removed), stuffed (therapeutic genes are put in), baked (the vector is produced) and consumed (administered to the patient).

Viruses are ideal vectors since they have specialised mechanisms to bypass the host immune system, whereas, broadly speaking, non-viral systems are hampered by a lack of ability to target the relevant tissues. Viruses are microscopic (visible only by electron microscopy) infectious organisms with an obligatory parasitic phase in their life cycle. They may or may not have an outer covering made of proteins or lipids (envelope), but they all do have a protein shell (capsid) that protects the genome (the complete genetic material of an organism) and some essential proteins (Fig. 1). The viral genome is the epitome of space-saving and genome organisation. Though viruses have dogged our footsteps since the dawn of civilisation (as hieroglyphics of an Egyptian priest from around 1500 BC maimed by polio show), and viral diseases such as smallpox and influenza have changed the course of history – for example, more people were killed by the Spanish flu than World War I – we can harness and exploit their built-in abilities by using them as vaccines or as gene therapy vectors.

The idea of gene therapy has been mooted since the 1970s, but it was after the tragic case of the ‘bubble boy’, David Vetter (1971–1984), that the idea really took off. David suffered from a genetic mutation resulting in a severe combined immunodeficiency (SCID). In the early 1990s, researchers used a retrovirus to achieve a lifetime correction of a similar genetic mutation in two human volunteers. Since then, viral gene therapy research and production has greatly accelerated.

How are viral vectors produced?

An analysis and understanding of the life cycle of the viruses is essential. This includes picking only those genetic elements absolutely essential for the growth and packaging of the nucleic acid genome into the protein capsid.

This new genome is provided in the form of a DNA plasmid. The viral vector still needs the proteins produced by the ‘non-essential’ genes. So we put it in a totally different DNA plasmid (in trans), and because this plasmid does not have the part of genetic material essential for it to be packaged in the plasmid capsid, it is not packaged. All these plasmids are transfected into producer cells, and the viral system hijacks the cell mechanism and harnesses it towards the production of the viral proteins. The recombinant viruses assemble in the producer cells. They are then purified, concentrated, characterised and are ready for administering to the patient. There are now different gene therapies, viral vector systems each with particular advantages and disadvantages (Table 1). The problems with immune response and genotoxicity which plagued the initial clinical trials have been largely solved by the increase in our knowledge of basic virology, and we now know a lot more about viral vectors and how to make them safer and more effective than we did 20 years ago.

In academia, where usually only small amounts of recombinant viruses are needed for experiments, the amounts of cells needed to produce the vectors are smaller. Small-scale (< 1.0 l) static systems (Petri dish, T-cell culture flasks or multiwall plates) are generally used to culture cells. The vectors are generally purified using gradient ultracentrifugation, a technique from the 1950s. Vectors are usually not produced under good manufacturing practice (GMP) conditions, since the overhead costs for maintaining GMP facilities are very high.

However, in industry, a robust and consistent production process with control over variables that can’t be realised in plates and scalability is the key. Production is carried out at a large scale (from one litre up to thousands of litres); therefore, ultracentrifugation, despite being an excellent method to purify vectors, is not scalable as it has low throughput. Therefore, translating an excellent research idea from academia to industry may not be simple, since it will need process development. This could be a scenario where the Centre for Process Innovation (CPI) can help.

CPI is a not-for-profit technology and innovation centre based in the North East of England that helps bridge the gap between academia and industry (the ‘valley of death’ of scientific innovation). Through our knowledge, expertise and state-of-the-art-facilities, CPI enables groups to develop, prove, prototype and scale-up the next generation of products and processes.

Viral vectors are routinely produced at CPI, starting with the basics of virology and optimisation of the plasmid transfection and using either chemical or physical GMP-approved methods to produce the viral vectors in our biosafety level 2-approved laboratories. The vector-producing cells are cultivated in closed systems – the bioreactors, which primarily provide containment and suitable conditions for cell growth and product formation. 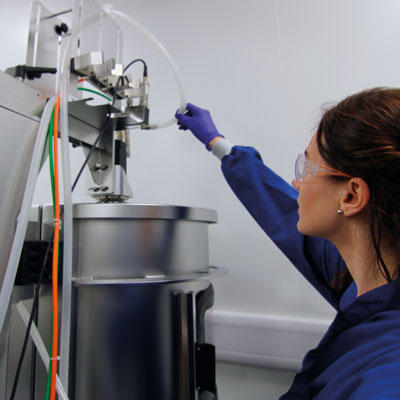 Fully automated micro bioreactor systems can be used to model the ideal growth conditions to produce viral vectors in larger bioreactors. Traditionally, this includes parameters such as temperature, pH and dissolved oxygen. Dynamic cell culture bioreactors are, however, most commonly used for larger-scale cultivation. To maintain culture homogeneity, these bioreactors are mixed by internal impellers (stirred-tank), rocking motion (cell bag) or pneumatically driven (airlift). Scalable filtration and chromatography methods are used to purify the vectors to the quality that is expected from ultracentrifuge-purified counterparts. Once the vectors are purified, optimised cryoprotectants are added to preserve the viability of the vectors. Vectors can then be titred, and the ratio of infectious units to non-infectious particles is calculated. If the ratio is too high, there is a risk of a dangerous immune response, which has often been the cause of unsuccessful gene therapy trials in the past. The genotoxicity of the vectors can be ascertained, and CPI has GMP simulation suites where we can mimic the production of the vectors under GMP conditions before commercial partners with licensed GMP facilities can take over the production.

After decades of blood, sweat and toil, gene therapy is now poised to make a breakthrough in human health. Viral gene therapy treatment is now available in clinics with approval in the EU in 2012 of Glybera, an adeno-associated virus (AAV) vector targeting acute pancreatitis. Since then, Strimvelis, a retroviral vector used in treatment of SCID; KymriahTM, where immune cells, transduced by a lentiviral vector, can fight cancer; and Luxturna, an AAV vector used to treat blindness, are available. To date, around 2,600 gene therapy clinical trials have taken place, so more gene therapy medicine might be available soon. Currently, there is huge investment in the field, and the global gene therapy market, which is expected to grow at a compound annual growth rate of 40.8% from 2017 to 2022, is predicted to be worth over US$10 billion by 2025. The high manufacturing costs associated with the existing gene therapy medicines might put them beyond the reach of most of the public, so more process development is needed to make this medicine more affordable. CPI has a strong desire to support academics, government agencies and industries in driving this technology forward.

Gene therapy market to be worth over USD 10 billion by 2025, predicts roots analysis. https://www.pr.com/press-release/623627

The Influenza Pandemic of 1918. Human Virology at Stanford. https://virus.stanford.edu/uda

Jonathan Welsh completed his MSc and PhD in Biochemical Engineering at the University of Birmingham. He gained industrial experience working for a contract manufacturing organisation (CMO) on the development and optimisation of cell lines for production of therapeutic proteins. He joined the Centre for Process Innovation in 2014 to oversee the upstream bioprocessing capabilities.

Helen Young holds a BSc in Genetics from the University of Liverpool and a PhD in Molecular Cancer Studies from the University of Manchester. After her PhD, Helen worked as a postdoctoral researcher at the University of Manchester studying the inflammatory microenvironment in melanoma progression and its role in tolerance to current therapies. Helen is a Bid/Proposal Development Manager at the Centre of Process Innovation. She is involved in supporting the development of collaborative research and development applications for public sector funding and focuses on driving innovation in the biologics sector, working with academic institutions, small and medium-sized enterprises (SMEs) and industry.

Ruth Stephen completed her PhD in Molecular Genetics from the University of Reading and her MBA from Sidney Sussex College, Cambridge. She carried out postdoctoral research in cancer biology and molecular pharmacology at Georgetown University, Cancer Research UK and the University of Cambridge, before moving into industry. Currently, she works for Affirm Medical Communications.

Sam Stephen completed his BSc from University College, Trivandrum, and MSc from Pembroke College, Oxford, before finishing his PhD on molecular virology at the University of Cologne on genotoxicity of adenoviral vectors. Dr Stephen’s postdoctoral research at University College London involved lentiviral vector genotoxicity and generation of clinical-grade cell lines for viral vector production. At the University of Leeds, he worked on the use of viral gene transfer to elucidate mechanisms in cardiovascular diseases and cancer, as well as the use of various virus-like particles for use as vaccines. He joined the Centre for Process Innovation in 2016 to oversee vector and vaccine research using recombinant viruses.

Can you describe what you would do/what skills you would need in a typical day or week in your job?

Sam: I am the senior scientist in charge of the viral vectors team. I use virology, molecular and cell biology, biophysics, biochemistry, management skills and planning skills routinely.

What is your favourite part of your job?

Sam: There is innovative research at CPI, and the management is very supportive of this. I had worked in academia and had seen many excellent projects bite the dust for lack of process optimisation and patent development. At CPI, I see projects moving forward from the basic research to the benefit of humanity and feel a sense of satisfaction in seeing the tangible impact of the research. That is the favourite part of the job.