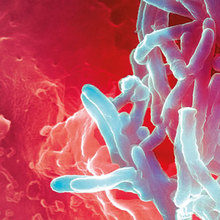 This edition of Microbiology Today focuses on Mycobacteriaceae, a family of bacteria that have been closely entwined with human health and disease throughout the world and across the millennia. Tackling diseases caused by mycobacteria calls for a global perspective. It is clear that even with the rapid advances in health care that our generation is experiencing, these diseases are still adversely affecting communities and societies across the globe.

Mycobacteria are usually slender, curved rods that personify the old adage of the ‘exception that proves the rule’. They can be classified as Gram-positive bacteria but they do not stain as Gram-positive bacteria should. Instead they are distinctive bacteria that share the common property of a thick, lipid-rich cell wall that tightly retains carbol fuchsin dye even in the presence of a harsh acidic alcohol treatment: in summary they react positively with an acid-fast stain. These acid-fast bacteria have something else in common; they are all part of the synergistic, symbiotic relationship that humankind shares with their environment. Although some mycobacteria are free-living saprophytes, they are also animal and human pathogens. Changes in the way that our interactions with the environment have affected our relationship with these bacteria are illustrated beautifully by Richard Bentham and Harriet Whiley. They describe how recent health care advances have led to a human population increasingly susceptible to opportunist pathogens such as Mycobacterium avium, which has found a perfect niche for survival in biofilms found in hospitals.

Tuberculosis (TB), caused by Mycobacterium  tuberculosis, is one of the principal human pathogens on the planet. These bacteria were first isolated in the 19th century by Robert Koch who postulated that this was the ‘evil’ causing TB. Jaroslaw Dziadek and colleagues describe how this pathogen is not only insensitive to most known antibiotics but also able to evade the immune host responses. Learning more about the biology of these bacteria will hopefully lead to potential new antimicrobial chemotherapy approaches. Steven Smith, on the other hand, updates us on the progress vaccinologists are making towards designing and developing the next generation of TB vaccines to aid prevention of this terrible disease.

Mycobacteria that cause diseases currently failing to attract as much attention as TB include Mycobacterium ulcerans. This bacterium is responsible for Buruli ulcer, a neglected tropical disease (NTD) found mainly in poor, rural areas of West and Central Africa. Tim Steiner describes how Buruli ulcer is also endemic in temperate regions of Japan and Australia. With the environmental reservoir unclear, the need for a coordinated, well-funded and focused research effort to tackle this disease remains. Another NTD associated with poverty, leprosy, has a large number of new cases originating in South-east Asia, the Americas and Africa. Richard Truman and colleagues discuss the highly adapted niche pathogen Mycobacterium leprae. They explain that the USA population is also not immune, with reports indicating that zoonotic transmission of M. leprae from armadillos is responsible for up to 64% of all leprosy cases. Scientists are now investigating the role that armadillos may play in perpetuating leprosy in the Americas.

The Comment section is provided by Elizabeth Wellington and Orin Courtenay. They touch on the debate surrounding the transmission of bovine TB between wildlife (badgers) and cattle. Their current research detects the causal agent Mycobacterium bovis from environmental contamination of pasture and soil surrounding badger setts. They are keen to elucidate whether faecal shedding of the bacterium could be a reliable measure of transmission risk from badgers to cattle. It is hoped this may lead to suggestions to solve the current bovine TB crisis.

These articles show that we have a worldwide community of scientists engaged in trying to understand and ameliorate the consequences of infections caused by these bacteria. After reading this edition of Microbiology Today, I hope you agree that the articles reflect the wide range of positive contributions that microbiologists are making to improve human and animal health.