Mycobacterium avium Complex – making the worst of an opportunity! 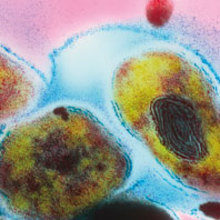 One of the downsides of recent advances in medicine and healthcare is that more people live longer! This in itself doesn’t seem like a bad thing, and most of us would be quite happy to live longer. However, health advances have permitted a wide range of treatments that mean that an increasing number of us are continuing our lives with immune systems that are punching below their weight, the immune-compromised. This is where the downside occurs. A greater population of immune-compromised people has seen the emergence of a new set of diseases that affect them. These organisms are called ‘opportunists’; they take advantage of a weakened immune system to cause infection.

Mycobacterium avium is one of these opportunists. In fact a group of different and closely related species and strains of this bacterium form a group called the Mycobacterium avium Complex, MAC for short. MAC is a sub-group of the non-tuberculous mycobacteria. This means they do not cause tuberculosis, but can cause a range of other serious and life-threatening infections. In the majority of cases these infections are caused in people with poor immune systems such as the very young, the old, transplant recipients, cancer patients and those with AIDS. Disease caused by MAC was almost unheard of 30 years ago and has really only begun to be noticed as a serious problem in the last decade. It has now been listed as a ‘notifiable disease’ in many health jurisdictions. This means that physicians and pathologists must report cases of disease to their state or government health departments.

So what diseases does this group cause? MAC produces a range of infections. These can include infections in the respiratory tract, gastrointestinal infections as well as skin and soft tissue infections. In immune-compromised people MAC infections have the potential to spread throughout the body affecting multiple organs; when this occurs there are very high fatality rates.

MAC also causes infections of the lymph nodes; this is the most common presentation of MAC in children, primarily affecting those aged 6 months to 2 years old. Often lymph node infections need surgical removal of the infected tissue as antibiotic treatments may only subdue the infection and the disease may re-emerge years after treatment.

There is also increasing evidence linking MAC to Crohn’s disease, which is a chronic inflammatory bowel disease. The link is unclear as ulcers in the intestinal tract may have MAC present within them. Whether the organisms are taking an opportunity to colonise the ulcer or actually cause the ulceration has not been determined. Some work has shown that antibiotic treatments that are effective against MAC may relieve symptoms of Crohn’s disease sufferers.

The bacteria are small and slow-growing with a waxy cell coating typical of other mycobacteria. MAC are also able to enter living cells and multiply inside them. These three factors assist them in successful infection and survival in the environment.

Although slow growth sounds like a disadvantage, MAC’s slow growth and slow metabolic rate means that when exposed to disinfectants or antibiotics they take them up and metabolise them slowly. As a result, exposure to antimicrobial agents (antibiotics or disinfectants) in an infected person or a contaminated water supply will be ineffective against MAC at the same concentrations used to control other bacteria. Typically, treatment for a mycobacterial infection will take weeks rather than days.

The waxy coating on mycobacteria is a defining feature. All mycobacteria produce ‘mycolic acids’ that coat the cell surface in a layer of bacterial wax. The waxy layer slows down or prevents the entry of antimicrobial agents and enables the bacteria to survive long periods in harsh environments.

Intracellular growth is also a key feature of MAC infections. Once inside a host cell the bacteria can use it for a source of nutrients, protection from the immune system and from antibiotics. The mechanism of intracellular growth is complex and not fully understood but makes for a real challenge in combatting disease, especially if an infected person has a weakened immune system. In the natural environment the bacteria are able to invade the cells of protozoa, and in particular amoebae. Amoebae are single-celled organisms similar in general structure to human white blood cells. They are the predators of the microbial community ingesting and digesting bacteria and other micro-organisms and are extremely abundant in both soil and water. They play an important role in normal healthy recycling of nutrients in the environment.

This intracellular multiplication is the same process that causes human infection. White blood cells (phagocytes) in humans also graze and digest bacteria as part of the normal immune defence process. When MAC is ingested by white blood cells from an immune-compromised individual it initiates the same infective process as that used for protozoa causing tissue damage. 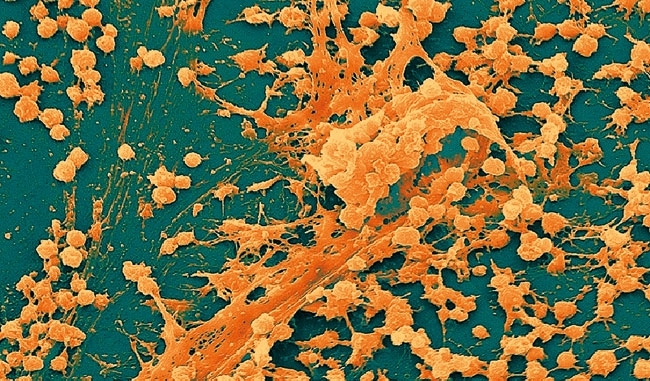 A number of cases of MAC infection have been attributed to potting mixes and composts. Compost is organic material that has undergone an intense microbial degradation process. This creates an environment that is ideal for the growth of protozoa and amoebae that can graze the bacterial population. Obviously this creates the perfect environment for intracellular parasites of protozoa, like MAC to colonise. MAC infection has resulted from activities like gardening through contact of open wound sites, inhalation or ingestion of small amounts of compost material.

MAC infections have been linked to a range of natural and artificial aquatic environments. This includes, drinking water, warm water systems within buildings, showers, fountains, spas, hot tubs and swimming pools. MAC are able to survive within these environments due to their ability to survive disinfectants and their growth within biofilms.

Biofilms are complex communities of micro-organisms attached to surfaces and covered in their own slime (polysaccharide) coating. This coating will hold together a functional community of organisms including viruses, bacterial, fungi, protozoa, algae and more. Biofilms can be found in almost all wet environments on the planet. MAC have been shown to grow as part of biofilms in water systems. Protozoa graze biofilm surfaces and so provide the opportunity for MAC to parasitise them.

Biofilms are notoriously hard to disinfect, due to their polysaccharide coating and attachment to surfaces. They can be found in multiple environments in buildings, such as hot and cold water systems, showers, spa pools, swimming pools and cooling water systems. The complexity of these systems and their inaccessibility for cleaning means that biofilms provide huge surface areas for microbial activity. It is accepted that they are impossible to eradicate once established but may be controlled.

Warm water systems within buildings like hospitals and health care premises are a major source of MAC infections. This is a result of the unhealthy combination of a complex biofilm contaminated water system being distributed to a population who are in the building because they are sick. Water is an important resource in any healthcare premises and occupants are exposed to it through drinking, bathing or other activities like hydrotherapy pools. It has become essential to provide routine maintenance and disinfection in these facilities to reduce the risk of infections from MAC and other water-borne opportunists.

This brings us back to our first point. Due to advances in health care there is an increasing population with weakened immune systems. This has led to increasing numbers of immune compromised people, healthcare premises and aged-care facilities. This in turn means increased opportunities for the chance exposure, the case of mistaken identity, and MAC making the worst of an opportunity.