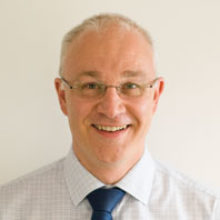 In June, Dr Peter Cotgreave joined the Society as Chief Executive. Peter joins us from the Royal Society, where he worked as Director of Fellowship and Scientific Affairs. We asked him about his background, his career and his thoughts on the future of the Microbiology Society.

I was educated in Shropshire, where I grew up. I always knew that I was interested in science; I studied it for my A-Levels, at University and then did a PhD in Zoology. If you grow up in the middle of nowhere on the Shropshire–Wales border and are not interested in animals and plants you are going to be very bored!

Was there a particular moment that sparked your interest?

One that I do remember is this: my uncle was a farmer and he gave me a badger’s skull when I was about eight years old. It absolutely fascinated me – the shape of the teeth, the fact that it had an articulated jaw (unlike any other mammal), for example. That was the moment for me, as I started to ask why these things were the way they were. I’ve still got the skull all these years later.

What was your research area?

I was a bird ecologist. I worked on community ecology – trying to understand why in any one place a particular bird species is more common than another. The work took me to Brazil, Tobago, Tanzania, Ethiopia – the great thing about doing bird ecology for a living is that other people paid for me to go to amazing places where there were interesting species to see!

What made you step away from research?

I was cycling to work one morning – I was a lecturer at the University of Oxford at that point – and it occurred to me that while I’d done the textbook academic career, I’d never really stopped to think whether that’s what I wanted to do. It just kind of happened because I was interested in the subject. I knew I didn’t want to leave science, but I did want to leave research. I went to work for the Zoological Society of London – it was the best job in the world for someone in that position. I spent half of my time doing research and half bridging the gap between people in research labs and the public-facing parts of the society like the press office.

Tell us about your time at the Campaign for Science and Engineering?

For nine years, I was the Director of Save British Science, which became the Campaign for Science and Engineering (CaSE) on my watch. We were representing the grass-roots scientific community, trying to get messages across about the importance of funding for science and engineering.

What are you most proud of achieving during your time there?

I’d say two things. When Gordon Brown, then the Chancellor, announced his 10-year science strategy in 2004 and cast the plan as a response to what the science community had told him. The other is that my colleagues and I got to go to Number 10 several times, much to the jealousy of other, larger organisations. I asked them why we were invited and was told that: ‘You filter out the cacophony of noise coming out of the Science Community. You’re telling us the things that we really need to take seriously.’

What did your role at the Royal Society entail?

My job was to interact with the Fellows and to make sure that the Royal Society was doing the things that its members wanted. I also oversaw the Society’s scientific programmes and conferences, its diversity work and its work with industry.

How do you think this experience will fit with the Microbiology Society?

I think that many learned societies have for too long taken their members for granted. One of the things that I want to do is to get out to meet and get to know Society members: learn about what they’re doing, what their concerns are, and how they think the Society can meet its goals, which are to advance the art and science of microbiology.

What are some of the challenges that the Society can, and should, be involved in?

One of the challenges we face is to get policy-makers, politicians and the public – anybody who’s not in the world of microbiology – to get as interested in something that you can’t see as you can about the panda. The medical aspects of microbiology are arguably more important now than they have been for the last 50 years, particularly with the increase in antimicrobial resistance. There are opportunities too, in the worlds of environmental and materials science, for example.

I think that microbiology is becoming less obvious as a distinct discipline within many university courses. I also think that many people who are microbiologists don’t see themselves as such, and think of themselves as geneticists or ecologists. We need to work to change that.

What can the Society do to become involved in these discussions?

I’ve been hugely impressed with how clearly the Council knows what it wants and how the organisation has a clear strategy. This sounds so obvious, but you’d be surprised how many organisations struggle to encapsulate what they’re trying to achieve. I wouldn’t have taken the job if I didn’t think the Society was very well placed to do lots of very interesting and exciting things in the areas I mentioned.

What are your plans for the Society?

We’ve got five strategic priorities and I think all of them are extremely important. I want to deliver on those in ways that support the members and the microbiological community as a whole.

There are a lot of learned societies in biology. We have to get better as a group at presenting a cohesive and united front, where it is appropriate to do so. The move to Charles Darwin House in London was a really important statement on that. As a Society, we have to leverage our influence by working with our partners, both here and abroad.