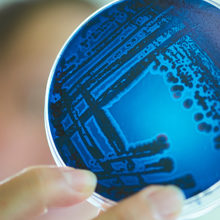 The increasing incidence of antibiotic-resistant bacterial pathogens has resulted in an urgent need for new, clinically useful antibiotics. By 2050, antibiotic-resistant micro-organisms are expected to cause more deaths than cancer, road traffic accidents and other chronic diseases worldwide.

This is partly because effective antibiotics are essential to prevent infection when carrying out life-saving medical procedures such as surgery and chronic illness management. While reduction of antimicrobial use in farming and increased antibiotic stewardship are both essential, new viable alternative drugs that can be used in the clinic are still required.

Where do our antibiotics come from?

Soil micro-organisms have always been seen as a great resource for discovering not only antibiotics but also a broad range of other bioactive natural products with antitumoral, immunosuppressant, antifungal and anthelminthic activity. Amongst soil micro-organisms, actinomycetes are the most prolific producers of bioactive natural products. Actinomycetes are ubiquitous bacteria and, as such, they can be found in most environments on Earth.

Streptomyces were the initial antibiotic makers

Most of the antibiotics used in medicine and veterinary settings are produced by actinomycetes, a fascinating group of non-motile filamentous bacteria. The most prolific producers of antimicrobial compounds, responsible for the production of over two-thirds of these clinically relevant molecules, belong to the genus Streptomyces, which is abundant in all soil environments. During the period from 1950–1970, known as the Golden Age of antibiotic discovery, soils were intensely screened by the pharmaceutical industry in order to isolate antibiotic-producing micro-organisms including mostly Streptomyces species and other closely related actinomycetes genera. This approach resulted in thousands of drugs being identified during this period, and later applied to the clinic, including a variety of antimicrobial compounds. However, after just a couple of decades, rediscovery of specialised metabolites became a regular occurrence and the rewards from this type of strategy were substantially reduced.

Screening similar environments in search of actinomycetes tends to lead to the isolation of micro-organisms which produce structurally similar antibiotics. This has encouraged scientists in the natural product discovery field to start exploring more unusual environments in the hope that novel strains containing new antibiotic gene clusters with potential clinical use will be identified.

In recent years, the astonishing diversity of natural products from actinomycetes found in marine environments has become apparent. Over 250 novel bioactive compounds have been reported from approximately 100 different actinomycete strains, belonging to nearly 40 different genera, in the last decade. Among them, genera such as Salinispora, with over 40 novel compounds identified including the medically relevant salinosporamides; Verrucosispora, with 18 new compounds identified including the abyssomicin family of antibiotics; Nocardiopsis (52 new compounds) and Micromonospora (46 new compounds) are showing remarkable potential as sources of structurally diverse, novel, specialised metabolites with both unique chemical moieties and clinically relevant activities. 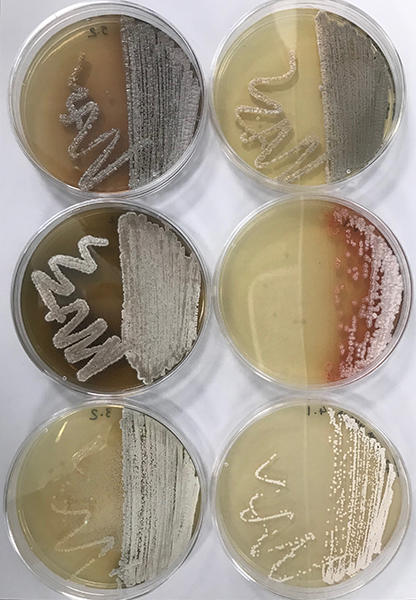 The Atacama Desert of northern Chile, considered to be one of the most arid and extreme environments on Earth, has also proven to be an unexpectedly rich resource of actinobacterial and novel chemical diversity. A total of 46 secondary metabolites representing diverse chemical classes including alkaloids, peptides, macrolides, terpenes and polyketides such as the novel antimicrobials chaxalactins and chaxamycins, are derived from only a few Streptomyces strains isolated so far from that environment.

Actinobacteria associated with the cuticle of different species of leafcutter ants have been identified in recent years as extraordinary reservoirs of bioactive molecules which assist leafcutter ants in protecting their fungus gardens against a diverse array of natural enemies, most of which are fungal pathogens. Examples of talented actinomycetes, in terms of specialised metabolite diversity, isolated from leaf cutter ants to date belong to genera such as Rhodococcus, Nocardia, Microbacterium, Kitasatospora, Pseudonocardia and Streptomyces such as Streptomyces formicae KY5, producer of a group of pentacyclic polyketides known as formicamycins which present antibacterial activity against multidrug-resistant strains.

This is only a small sample of the chemical diversity of bioactive specialised metabolites encoded in the genomes of actinomycetes isolated worldwide to this point.

The development of improved next generation sequencing and mass spectrometry technology, as well as bioinformatic programmes able to identify specialised metabolite biosynthetic gene clusters has emphasised the vast genetic potential of actinomycetes as nature’s pharmacists. In fact, their potential to produce specialised metabolites is far more than initially revealed by traditional screening.

In order for any promising bioactive compound to undergo clinical trials, it is critical to obtain high enough levels of the drug. The challenge most actinomycetes geneticists face is to find efficient ways to increase the yield of these potential candidates, particularly those compounds for which biosynthetic gene clusters are encoded in the genome but production levels are barely detectable under laboratory conditions.

Based on their genome sequences, most actinomycete species have the potential to produce on average around 10–15 antimicrobial agents of natural product origin. However, when these species are grown under laboratory conditions, only one or two antimicrobial compounds are usually detected. This is because most of these antibiotic gene clusters appear dormant (i.e. are not expressed) under laboratory conditions. The fact that actinomycete species maintain these intact antibiotic gene clusters in their genomes suggests the products are useful in nature, probably to attack competitor micro-organisms in their harsh environments. These dormant or cryptic antibiotic gene clusters represent an untapped resource in terms of novel chemistry which could lead to the discovery of new antimicrobial compounds that could be very useful in the clinic if we were able to produce them in high enough amounts.

There are several ways in which scientists can ‘awaken’ and increase production of these silent gene clusters. One of these key approaches is to understand the regulation of specialised metabolite gene clusters. By growing actinomycete strains under conditions similar to those they would encounter in their natural environment, scientists can understand the signalling pathways leading to the expression of these compounds and later manipulate them in the laboratory. Identifying the role of regulatory proteins ultimately controlling the production of a novel antimicrobial compound allows scientists to manipulate biosynthetic pathways using a rational approach; i.e. overexpression of positive regulators and/or deletion of negative regulators from the genome, hopefully leading to increased yield of the compound. The recent development of actinomycete genetic tools which generate clean deletions of genomic regions such as the SceI meganuclease system and the pCRISPomyces plasmids have considerably facilitated this task.

Another tactic to enhance production of specialised metabolites involves increasing the availability of precursors in the media so as to encourage induction of biosynthetic gene clusters, and finally, cloning entire biosynthetic gene clusters into heterologous hosts has also proven successful. Heterologous expression has the advantage of removing global transcriptional ties present in the natural producer, but good understanding of the metabolic resources and regulatory cascade required for the production of these ‘silent’ pathways in the natural producer also needs to be considered in order to successfully obtain high yields of the compound of interest.

Actinomycetes are ubiquitous nature’s pharmacists which provide us with a plethora of novel bioactive compounds to be explored. It is through interdisciplinary collaborations and innovative ideas that we will continue to unlock their potential and keep ahead on the antimicrobial resistance arms race.

Fernández-Martínez LT, Bibb MJ. Use of the meganuclease I-SceI of Saccharomyces cerevisiae to select for gene deletions in actinomycetes. Sci Rep 2014;4:7100.

Lorena Fernández-Martínez studied a BSc in Genetics and Biochemistry before completing a PhD on the regulation of stress responses in the bacterial genus Streptomyces. She then moved to postdoctoral positions at INBIOTEC, Spain and John Innes Centre, UK. Her research at Edge Hill University focuses on understanding the complex regulatory pathways that lead to specialised metabolite production in actinobacteria by using gene manipulation, co-cultivation and environmental extracellular signalling methods. Lorena has been a member of the Microbiology Society for 17 years.

Micro-organisms are essential for life on Earth. Understanding microbiology helps us understand environmental and ecological interactions on the planet, the evolution of living organisms, plant and animal health (including humans), as well as providing biotechnological solutions to current problems. That’s why all aspects of microbiology are so important and worth studying.

I think one of the best decisions in my career was joining the Microbiology Society Communications Committee, as it has given me the opportunity to meet fantastic people working in completely different aspects of microbiology, who are now friends and collaborators.